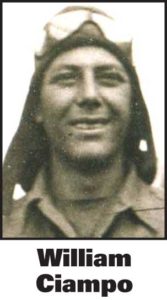 COOPERSTOWN – William Wesley “Wes” Ciampo, 92, formerly of Ridgewood, N.J., a World War II veteran of the Battle of the Bulge and a retired real-estate title examiner, passed away Thursday night, Jan. 24, 2019, at Cooperstown Center for Rehabilitation & Nursing.
He was born Feb. 8, 1926, in an ambulance en route to a hospital in Hackensack, N.J. After Wes was born, the ambulance turned around and returned to the family home in Lodi, N.J. His father, Salvatore Ciampo, was a native of Rapone, Italy, and his mother, Catherine Terhune Ciampo, was born in New Barbadoes Township (Hackensack).
On May 4, 1944, Wes was inducted into the Army, serving his country during World War II with Troop A of the 18th Cavalry Reconnaissance Squadron, mechanized. A radio operator in the European Theater of Operations, he saw action in the Ardennes, Central Europe and Rhineland campaigns. He was with Patton’s Third Army that relieved Allied forces at the Battle of the Bulge where Wes’ brother, Everett, was fighting and was badly wounded.
Upon receiving his Honorable Discharge from the military, Wes returned home and eventually received a two-year degree from Fairleigh Dickison Junior College.
For many years, he worked as a real-estate title examiner for C&C Abstract Company and Northeastern Title Services in Hackensack, NJ. He made his home in Ridgewood, N.J. until moving north to live with his son and family in Fly Creek.
Wes is survived by his son and daughter-in-law, Wesley and Evette Ciampo of Fly Creek Valley; three grandchildren, Bryar-Lyn Ciampo (James Dix) of Schenevus, Jeremy T. Ciampo (Kirsten) of Shoreham, and Corey M. Ciampo (Amanda) of Ridgewood, N.J.; five great-grandchildren, Dustin Ciampo and Keaton Winsor, and Tatym, Lakin and Brighton Ciampo; and two sisters, Mae Jackson of Passa Grille and Earla DeSanto, both St. Petersburg, FL.
He was predeceased by his wife of 57 years, Edith Hladik Ciampo, on Dec. 30, 2006.
Services will be private, and he will be laid to rest in Cedar Lawn Cemetery in Paterson, NJ.
As an alternative to flowers, the Ciampo family respectfully requests that memorial donation be made to Catskill Area Hospice & Palliative Care, 297 River Street Service Road, Oneonta, NY 13820.
Arrangements were entrusted to the Connell, Dow & Deysenroth Funeral Home.