Renewables Not
Ready To Replace Gas

Those who oppose using fossil fuels to provide the bulk of our energy needs without offering viable alternatives are depriving this and future generations of job opportunities. When our country attempts to keep our illegal immigrants seeking to enter our country illegally in pursuit of jobs, Nancy Pelosi and those aligned with her call it “immoral”. What should we call doing that to our own citizens?
When those opposed to fossil fuels argue against them, they point to their environmental impacts, especially their contribution to “climate change” and laud renewables as being “pure” when it comes to the environment. Is that really the case?
When it was discovered that wind turbines were killing birds, that information was “swept under the rug” by the regulatory agencies and media. Golden and bald eagles are protected under the “Golden and Bald Eagle Protection Act” and the “Migratory Bird Treaty Act.” It is illegal to kill, harm, harass or pluck a feather from one.
However, in a move to subsidize the wind power industry by removing a regulatory hurdle, the Obama Administration granted the wind-power industry an exemption whereby each wind power company could kill up to 4,200 eagles over a 30-year period (Google “Obama Allows Wind Turbines to Legally Kill Eagles”). The environmental groups didn’t like it, but they were caught in a conundrum – eagles or wind power – and so they remained quiet.
That exemption only explains away the eagles, but doesn’t address the tens of thousands of song birds that are annually struck and killed by a turbine or blade. Is wind power “pure”?
• 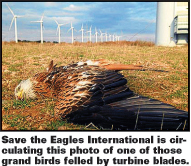 What about solar energy? According to an application filed by New York City, it takes about 40 acres of solar panels to provide the electricity for 1,250 households. Thus, if you were to provide New York’s 29 million residents with solar power via solar farms, it would take over 500,000 acres under glass.
Those acres would no longer be forests, brush or pastures with the ability to sequester carbon. That being the case, one must ask if there would be a net gain or loss with regards to reducing the carbon that people say is contributing to climate change. In addition to the carbon issue, solar farms in California appear to be contributing to the songbird mortality
You see, there is no free lunch and no form of energy yet discovered and harnessed is “pure.” For you, me and the 2017 estimated 7.53 billion people who inhabit planet earth to exist, there will be pollution.
If the U.S., with its sophisticated pollution abatement equipment, bans coal, China will buy and burn it without those sophisticated emissions controls and there will be a net overall loss in the planet’s air quality.
Advocating against natural gas without offering up a viable alternative, for example, isn’t merely a religious experience where the outcome is between you and your God. The outcome may affect the lives of this generation and of generations yet unborn. It is important to remember that a healthy economy and a healthy environment are not mutually exclusive – rather they are inextricably intertwined.
We can have both, but without one of the two we may not have the other. Think about that and what it means not to you, but to your community.

Mike Zagata, a DEC commissioner in the Pataki Administration and environmental executive with Fortune 500 companies, lives in West Davenport.

One thought on “ZAGATA: Renewables Not Ready To Replace Gas”