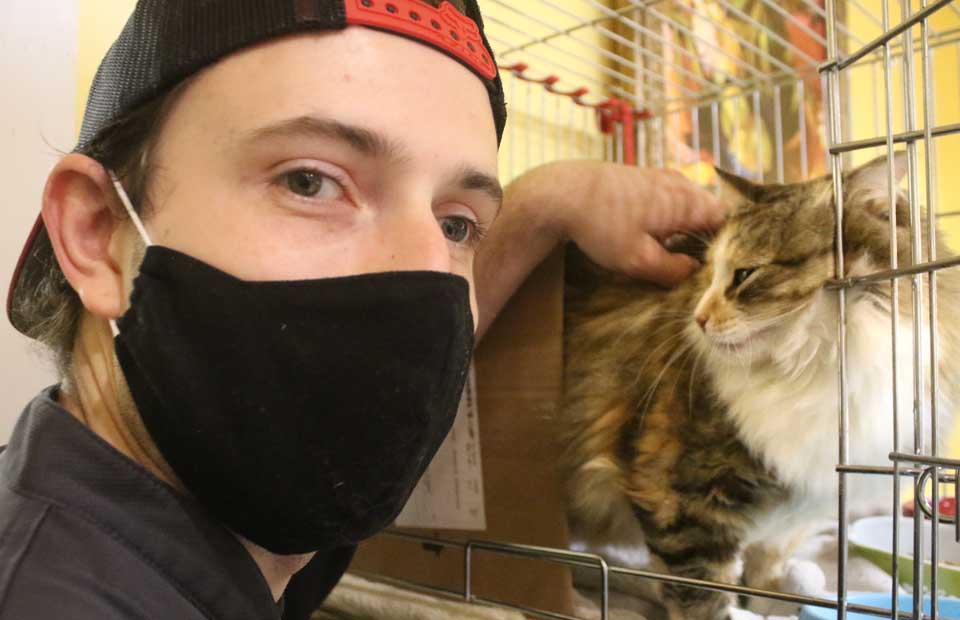 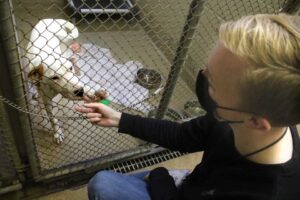 By early afternoon today, 11 dogs and cats had been adopted from the Susquehanna SPCA’s shelter in Hartwick Seminary, part of a two-day waiver of adoption fees enabled by the second annual “Howl’oween” Pet Adoption Event.”  A $5,000 grant, from ASPCA and Five Star, is allowing the waiver of the usual $100-200 adoption fee, according to SQSPCA’s Darla Youngs.  This year, because of COVID-19, reservations are required (call 547-8111), and it’s hoped that 25 animals will be adopted by Saturday evening.  Last year, with no social distancing, “we were mobbed,” said Youngs, and 48 were adopted in allotted two days. In top photo, Cooperstown’s Brian Bennett says hi to Rosebud, one of the cats up for adoption.  Inset, right, the SQSPCA’s Clark Oliver says hi to Twizzler, a rare Blue Tick Coon Hound/pit bull combination, one of his favorites.  The idea of “Howl’oween” is to reduce the shelter’s census, usually about 80 animals, before the Christmas season.  It’s busy time of year:  Last year, the shelter took in 143  animals between Nov. 1 and Dec. 31.  (Jim Kevlin/AllOTSEGO.com)