The President's refusal to abide by debate rules turned the showdown into one long, horrible talkshow

Biden lights up Twitter after using 'inshallah' in response to Trump

Why Trump blew up the debate, triggering a media backlash

200 YEARS AGO
Information Wanted – In the year 1814, a young man of the name of Carlos L. Mallory, a native of Woodbury, Litchfield County, Connecticut, and then resident with David Woodward, of that place, as an apprentice to the tanning and currying and shoemaking business, left his home, and has never been heard of by his friends since that period. He is now, if living, 24 years of age, about six feet high, black eyes, and of a dark complexion.
The object of this notice is to obtain information of his present situation. Any person, therefore, who can communicate anything relative to the fate of this young man, will do an act of humanity, which will be remembered with lasting gratitude by his afflicted parents and relatives, by addressing letters to Mr. Nathaniel Mallory, Newton, Fairfield, Connecticut.
February 1, 1819

175 YEARS AGO
Editor’s Note: It is rather annoying to an editor who has any brains and wishes to say something to his readers, to be put all aback by finding so much matter in type as to fill up his columns, affording no room for him to be heard. Brains, or no brains, we know of such a case. John H. Prentiss.
Mr. B.B. Bowen, an educated blind man, will address the people of this county upon the institution and condition of the blind, as follows: At Fly Creek, Tuesday evening February 13; at Hartwick Academy, Wednesday evening, February 14; at West Hartwick, Thursday evening, February 15; at Laurens Village Friday evening, February 16.
February 12, 1844

150 YEARS AGO
The Ladies’ Festival held at the Hall on Thursday evening of last week was a very pleasant affair, especially in its social aspect. It was good to see so many of our villagers “taking tea” together, and then tarrying for a chat and to listen to the music kindly furnished by the Cooperstown Band. The ladies who do the work on such an occasion find it no easy task to earn two or three hundred dollars, but they confer a real favor in more than one direction.
A Private Hop will be given by Mr. L.A. West at Bowne Hall this Friday evening when those of our young people who could scarcely keep their feet still at the festival last Thursday evening, will have an opportunity to gratify their desire for a pleasant dance. Mr. West’s classes have been large, and their proficiency is commended.
February 5, 1869

125 YEARS AGO
Local – The Military Band of Cooperstown is getting on very nicely since its reorganization and is making good progress. There are now 14 members and there are applications from others who desire to join. Our citizens have given the band a “lift” of nearly $200.
The sad news of the death of Miss Constance Fenimore Woolson in Venice, Italy was received here by cablegram, and by the daily papers of Thursday. Her relatives, the Cooper and Keese families had no previous advices of her illness, which must have been brief. The dispatch came from Miss Grace Carter, who is in Europe. Miss Woolson had for several years been a subscriber to The Freeman’s Journal. When we occasionally heard from her, she always expressed her love for her own country and her expectations later on to make Cooperstown her summer home. She was buried in the Protestant cemetery at Rome.
February 1, 1894

100 YEARS AGO
Frank N. Bliss of Cooperstown, R.D. 5 received a telegram from the War Department on Tuesday stating that his son, Sergeant F. Clifford Bliss, had died of bronchial pneumonia on January 9 in France. Sergeant Bliss was one of the original members of the Cooperstown detachment of Co. G. But, when he went overseas he was transferred to the Anti-Aircraft Division.
Orville A. Grover arrived at his home here on Monday, having been honorably discharged from Camp Upton. Grover left Cooperstown with the draft contingent on April 29 last, going to Camp Dix at Wrightstown, N.J. and becoming a member of the 311th Infantry. He went overseas in May and while engaged in the battle at Arras in August he received a wound in his left arm. He was cared for in hospitals in France and England until his return from overseas on December 21. He has been receiving treatment for his wound in a hospital in Hoboken, until transferred to Camp Upton for his discharge.
January 29, 1919

75 YEARS AGO
Mr. and Mrs. Carmen Booan of Cooperstown have received a card from his brother, Pvt. Stephen Booan, son of Dominick Booan of Oneonta, a prisoner of war in Germany. The card, the first word received by any of the family since October, states that he is in good health, and advised the family to get in touch with the Red Cross. It was dated October 7. He was listed by the War Department as missing in action since September 13, 1943, and soon after was listed as a prisoner.
February 2, 1944

50 YEARS AGO
The Girls’ basketball team at Cooperstown Central School finished in second place in the Center State Conference for the 1968-1969 season. Team members are Margo Allemant, Jeanne Marlette, Manager, Debbie Kuck, Judy Wedderspoon, Judy Talbot, Mary O’Leary, and team coach Pat Mihalko.
Bill Washburn, Cooperstown’s championship foul shooter missed one in a clutch situation last Friday night at Morrisville. But the miss proved to be better than the proverbial mile for the play resulted in the winning field goal as Cooperstown edged Morrisville, 59-58. With six seconds left in the game Cooperstown trailed Morrisville, 57-58 with Washburn at the free throw line. Washburn missed the shot but was able to grab the rebound and promptly popped the ball into the net for the winning bucket. The Redskin dandy finished with 32 points for the night. The Redskins will open their new gymnasium at the junior-senior high school next week against Clinton.
February 5, 1969 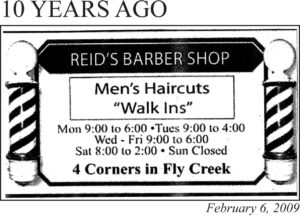