No cap crunch for Capitals, who land Mantha at deadline

Sen. Wicker on infrastructure meeting with Biden: We made good points but 'there is a lot of space between us'

As the book tour begins, he will be interviewed this week by Bill Moyers at an event at the TIAA-CREF headquarters, then will appeared at 5 p.m. Saturday, Sept. 26, at The Fenimore Art Museum Auditorium for a lecture and book-signing; retired SUNY Oneonta President Alan B. Donovan will emcee.  To reserve seats, e-mail a.holland@nysha.org or call  547-1433. 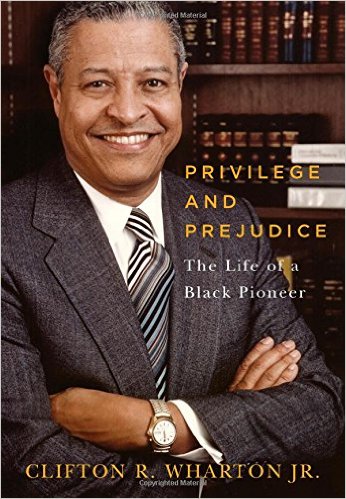 Editor’s Note:  Here is an excerpt from “The Titan Among Us,” an examination of Dr. Wharton’s life and book that appears in this week’s Freeman’s Journal and Hometown Oneonta.

Clifton R. Wharton Jr.’s archive, thousands of square feet set in a hillside off Glimmerglen Road, captures the scope of the enterprise: Row upon row of file cabinets; rows of shelving stacked with those heavy cardboard file boxes, hundreds of them, records of a life fully lived, fully achieved.

The final scene of “Raiders of the Lost Ark” comes to mind, where that government functionary boxes the invaluable artifact and rolls it down a long aisle, into oblivion, in a government warehouse that extends as far as the eye can see. Gone forever, the viewer concludes.

Not so with Dr. Wharton’s warehouse.  Son of a ground-breaking black U.S. diplomat, pioneering Harvard undergrad, former Rockefeller Foundation emissary (and later, chairman), Chicago Ph.D., Michigan State president, SUNY chancellor, Fortune 500 CEO and assistant secretary of state, Wharton has spent his retirement, more than two decades now, turning millions of records – letters from his mother, reports and studies from academe, memos from the heights of commerce and government, even an occasional Hy Rosen cartoon – into a unique and compelling memoir.

“Privilege And Prejudice: The Life of a Black Pioneer,” was published Sept. 1 by the Michigan State University Press …

AND HOMETOWN ONEONTA, AVAILABLE AT THESE OUTLETS