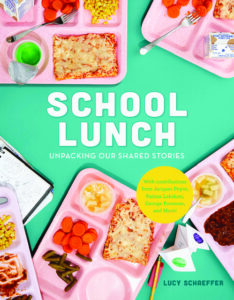 The book pairs Schaeffer’s photographs with 70 different lunch stories “from people age six to 93; hailing from 25 different countries and all across the United States,” Schaeffer said in the book’s introduction.

Schaeffer’s subjects include family members, friends, celebrities and strangers. Schaeffer said all of the stories are written in first-person narrative to highlight the storytellers’ voices over her own.

Although it is the first book as author for Schaeffer, she said her photographs have appeared in more than 50 books and cookbooks.

The project started in August 2016, when Schaeffer said she was brainstorming about what to make her daughters, Annie and Georgia, now 12 and 8, respectively, for lunches for their upcoming school year.

“I was sort of daydreaming and thinking it was so much easier for my parents. They just did peanut butter and jelly,” Schaeffer said. “It wasn’t like now, all these schools are nut-free and you can’t do peanut butter anymore.”

Schaeffer said her mind started to wander about what previous generations of parents packed in their children’s lunches, which led to an idea to promote her business as freelance commercial photographer.

“I have to send out clever things to promote my business and I was going to do a back-to-school promo and, you know, interview a few people about their lunches and do a shoot to make a little printed piece and send it out to my clients,” Schaeffer said.

“I started asking people about their lunches and it was way more interesting than I thought it was going to be,” she said. “I never did that promo, because I just realized it was more a subject that I wanted to dive deeper into.”

She enlisted the help of food stylist Chris Basrsh and prop stylist Martha Bernabe, whom she had worked with a lot professionally to do a test shoot.

Over the next couple years, Schaeffer said she did as many interviews as she could and then reached out to the stylists to do more shoots. Gradually, she said she started building a collection of stories and photos.

“It started as a personal project and it was probably a year or even over a year that it was just that,” Schaeffer said. “Then once I wanted it to become a book and sold it as a book idea, I think the challenge became, ‘how is this going to be cohesive?’”

Initially, Schaeffer said she was invested in a multi-generational idea, especially for people whose parents grew up in a different country, but as it evolved, she became less interested in present-day kids’ stories and the book became more about adults remembering their stories.

Schaeffer said she was living in Brooklyn for most of the time while she was making this book — she moved to Croton-on-Hudson in Westchester County since then — which made it easy to find and talk to people from a wide variety of backgrounds.

About three years ago, Schaeffer said she decided she wanted to interview people completely outside of her extended network of connections, so she set up a photo booth in Union Square and offered free portraits to anyone who would pose for a picture and tell her their school lunch story.

“I got 80 people from that. I think I only put 10 or 11 of them into the book, but they were 10 or 11 that I don’t think I would have reached,” she said. “There was a homeless man, a few international travelers that were just passing through. That got me some interesting people as well.”

Schaeffer said she had an arbitrary but specific list of different perspectives and stories she was interested in and wanted to feature people from as many different countries as she could find.

“But that said, the international stories, all of them, are still American stories. Everyone lives in the U.S. now which I think is part of our strength as a nation that we’re so diverse,” she said.

In the introduction, Schaeffer wrote, “Each story highlights our diversity while revealing our common experiences and our shared humanity. No matter where everyone came from or how divergent their childhood circumstances were, we are all Americans now. Our diversity is our strength. Now more than ever, this feels important to celebrate.”

There are stories from celebrities, including Indian-American author and actress Padma Lakshmi of Top Chef and Star Trek fame, and cookbook and food writers Melissa Clark and Gail Simmons, who are also judges on Top Chef.

There is a story from Instagram personality BrownBagDad who does really amazing artwork on his kids’ lunch bags, Schaeffer said. “It’s like taking a doodle or a note to like the highest degree. He does finished paintings on a lunch bag,” she said.

“He was very mad. He said, ‘I had nothing to work with. Everybody else is trading and I just had applesauce. It was like nobody wanted it and I couldn’t do anything. Not only did I want the junk food, I just wanted to be a part of that culture club,’” Schaeffer said.

Former heavyweight champion George Foreman told a story about how he used to blow up a paper bag, so that the other kids wouldn’t know that he didn’t have any lunch, Schaeffer said.

There are local stories, too. Schaeffer’s parents Bill and Paula, who live in Fly Creek where Lucy grew up, are in the book. (Paula was a CCS graduate from the class of 1963.) So is Cooperstownian Annegrete Barnum, who was born and raised in Germany.

Schaeffer said one common theme among all the different stories she heard was a feeling of “lunch envy.”

“Everybody seemed convinced that the other kids had a better lunch,” she said. “Everybody was like, ‘oh so-and-so got Fruit Roll-Ups, and so-and-so got this drink in their lunch.’ A lot of people really remember. They remember the first and last name of the kid who had the coveted lunch.

“But I have to say, in all my talking I never did uncover that kid or that adult who was like, ‘oh as a kid, I had the best lunch,’” she said.

“I would love everyone to be able to read this book and feel ‘Oh my gosh,’ that’s like my lunch, you know? That feeling of recognition and familiarity,” Schaeffer said. “And then I also want them to feel surprise and curiosity and intrigue for the ones that are so different from their own lunch. Because I think that really it has both of those cords. It has the familiarity, and it also has the unusual.”