Lights out at White House as America cries for leadership

Around 4,000 have been arrested during protests since George Floyd's death. Curfews were imposed and broken.

How to talk to your children about protests and racism 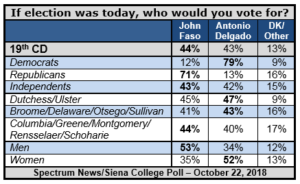 LOUDONVILLE – Freshman Republican Representative John Faso is ahead of his Democratic opponent Antonio Delgado by just a single point in the Siena Poll released this morning.

Here is the rest of the press release:

“Barnburner. Nail biter. Photo finish. Pick your phrase and buckle up because this race is going right down to the wire. Faso and Delgado are locked in a battle royale with the electorate about as evenly divided as it can be,” said Siena College pollster Steven Greenberg. “Each has more than 70 percent support from his own party and independents are separated by a point.

“Men side with Faso by 19 points, while women side with Delgado by 17 points. Voters with at least a bachelor’s degree support Delgado by 20 points, while those with less than a bachelor’s degree support Faso by 19 points,” Greenberg said. “Voters under 55 are separated by a point, as are voters 55 and older. While the race could not possibly get closer over the final two weeks, it certainly figures to get even rougher and nastier.

“By a narrow three-point margin, 48-45 percent, voters would prefer to see the House controlled by Republicans next year. Not surprisingly, more than 80 percent of Democrats and Republicans want their party to control the House, with independents nearly evenly divided,” Greenberg said. “Also by a narrow three-point margin, voters disapprove of the job Donald Trump is doing as President. Democrats overwhelmingly disapprove, while Republicans overwhelmingly approve. Independents are virtually evenly divided.

“This race all comes down to turnout. In a district that has virtually the same number of Republicans and Democrats and a race that has voters nearly evenly divided, the key will be which campaign does a better
job of getting its voters to the polls,” Greenberg said. “Answer that question and predicting the winner of this race is easy.”