COOPERSTOWN – It began in a simpler time.
“I was in the room when Jim Dow bought the medical coach from Bassett for $1,” recalled Margaret McGown.
That was almost four decades ago, and McGown and her husband, Mark Zeek, on Jan. 8, sold what has since grown from the single van into the three-county, 12-ambulance, five-station, 95-employee Cooperstown Medical Transport.
“We’ve lived the American Dream,” she repeated in a follow-up interview after the sale of CMT, an Otsego, Delaware and Chenango county mainstay institution, to Syracuse-based AMR. (She added at another point, “We’ve WORKED the American Dream.”)
AMR (American Medical Response) will consolidate three-county CMT with its operation in Schoharie, Herkimer and Montgomery counties into a single response unit.
The husband-wife partnership that headed for retirement a week ago began in the 1960s at “The Pit,” the basement hangout at Cooperstown’s Tunnicliff Inn, where youngsters and less-young-sters would gather after a day skiing at Mount Otsego in Pierstown.
The teenagers would sit and chat with their pals – and each other – by the roaring fire, cementing their friendship over hours of conversation.
Then they went their separate ways, she to Elmira College and a master’s at Russell Sage, he to SUNY Albany, both marrying other people, both working at Bassett Hospital. By the end of the 1970s, both were single parents, and their friendship rekindled into marriage.
In 1980, a year after Margaret witnessed the $1 sale to Jim Dow, former proprietor of what’s now the Connell, Dow & Deysenroth Funeral Home, the phone rang early one morning at the McGown-Zeek home while the couple was still in bed.
Would you like to buy the van and medical-transport business for $900? “We’ll call you back,” but the answer was “yes.” Margaret obtained a loan from Key Bank “on my signature. And that’s when it started.”
They didn’t know it at the outset but, looking back, “it was very much a time when ambulance providers started speeding up,” said Mark.
“There were all these tests that became available,” Margaret added – CAT scans were just the beginning. “But not everyone had the expertise.”

Winning the endorsement of the Adirondack-Appalachian Regional EMS Council, CMT soon was busily ferrying patients back and forth to the major hospitals in Syracuse and Albany for tests.
At first, dispatching was done via the phone under the couple’s bed, then via Dolores Coleman, Cooperstown’s switchboard operator from her home on Beaver Street. She was finally succeeded by CMT’s fulltime dispatchers.
In listening to the partners, Cooperstown Medical – fueled by hard work – expanded steadily from the single van to 24-7 paramedic-level care. But there were exclamation marks amid the narrative.
The first: the couple concluded EMT certification would help their enterprise. But only Cooperstown Fire Department members could join the local emergency squad, and in early 1980s she and three other women were blocked from joining by “the boys’ club.”
The four sued, and the case rose to the state Division of Human Rights, which ordered them – Margaret, plus Eudora Tabor, Rexine Ashford and Beth Sellers – admitted. May 5, 1983, quickly comes to her mind: That’s the day she received her EMT card.
In 1987 came the first big expansion, as “tiny hospitals” in Delaware County – Stamford, O’Connor in Delhi, Margaretville, Delaware Valley in Walton, and The Hospital in Sidney – lacked the transportation CMT could provide.
“There was a need,” said Mark. “It was continuous.”
And “because we were here, we started getting calls,” said Margaret, who, if not busy enough, in 1986 had begun studying law at Syracuse University. (“I loved the way law school made me think,” she says.)
CMT had built a station in Cooperstown in 1989. The Delaware initiative led to construction of a Delhi station (1990), joined by a four-bay headquarters in Davenport (2006), and stations in Norwich (2008) and Bainbridge (2012), plus a single-bay garage in Stamford.
Maintenance became so expensive, CMT also developed its own force of on-payroll mechanics.
With the opening of Dreams Park in 1996 – the first season, four weeks with 23 teams, 12 rambuctious boys per team – CMT stationed an ambulance there. In 1999, the baseball camp’s partners had a falling out, it went into bankruptcy. John Horan, a New Jersey lawyer, asked Margaret to run the camp.
This she did for three years, until Lou Presutti emerged as the victorious partner. Today, CMT maintains a clinic at Dreams Park for the 13-week, 1,000-team season – usually, with an ambulance posted on site.
CMT also provides service at the Unadilla Valley Motorcross Track during the major race weekends, and at other tracks in the region.
In 2008 came another opportunity when, due to a death in the owning family, Binghamton-based Superior Ambulance announced it was pulling of Chenango County. CMT stepped up, expanding the franchise to three counties.
Over the decade the couple has been running CMT, expectations have heightened. “EMS emerged from fire departments, but EMS is well beyond fire departments now,” Margaret said.
At the outset, emergency personnel worked near home, calls were mostly local, and anyone called out could expect to be back at work in an hour, the couple said.
Now, the trip from southern Delaware County to Bassett in Cooperstown and back can take hours, so ambulances are getting harder to staff. Employers are less willing to cooperate.
This affects fire departments, too. “We are very often called to do standby so local volunteers can fight fire,” Margaret said.
As recently as Dec. 29, for instance, CMT had two ambulances at Oneonta’s fatal Walling Avenue fire, transporting the four nephews and fiancé of John Heller, who died rescuing them, to Fox Hospital for treatment.
As CMT passes into new hands – the sale is expected to be complete in March – these developments make it harder for fire companies to staff their emergency squads, and professional squads increasingly important.
“Emergency medicine has evolved to have much greater expectations of what you can do in an ambulance,” said Margaret. “You just can’t dump people off at the local hospital.”
“It’s really high-end medicine,” added Mark, who stayed up on advances as state EMS Council president and a founder of UNYAN, the United New York Ambulance Network. “You can’t NOT know because it’s the standard of care.”
The days of the $900 ambulance are over, too. Mark reports the most CMT paid for ambulances over the years was for two Mercedes Benz models – $90,000 each. 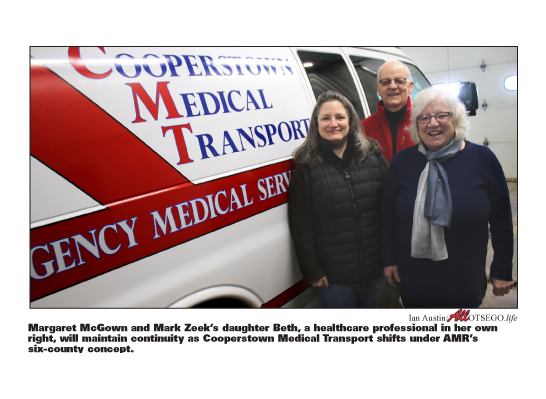