COOPERSTOWN – Entering the ballroom at 22 Main St., Congressman Antonio Delgado, D-19, looked around for a flag. 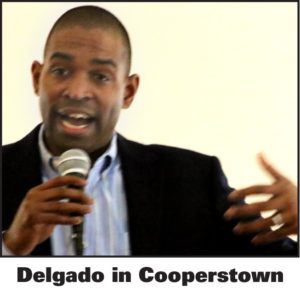 “I like to start these events off with the pledge,” he said as he took the mic.
There was one by the window, and he led the 400 attendees in the Pledge of Allegiance before launching into his remarks at his first Cooperstown “Town Hall” since defeating Republican John Faso on Nov. 6.
“I take pride in representing this district,” he said. “There aren’t a lot of truly diverse districts like ours in D.C., so their representatives aren’t motivated to find common ground. My hope is that we can all come together and
be civil.”
In opening remarks, he spoke about visiting the Coast Guard in Saugerties during the shutdown, his bi-partisan bill to extend federal-contracting preferences to surviving service-disabled veterans’ spouses, co-sponsoring the Family Leave Act, support for Universal Background Checks, and efforts to bring down prescription costs.
Many of his comments brought applause from the audience.

“Despite the longest shutdown in our nation’s history, me and my team are still working,” he said. “We need to restore integrity back into the system.”
He then opened up the room to questions.
Ken Ostrander and Quaker minister Jim Atwell, both of Cooperstown, asked for Delgado’s thoughts on Special Counsel Robert Mueller’s investigation. “Will you guarantee that the public will be able to see the Mueller Report, which we have paid for?” asked Ostrander.
“I can’t guarantee that,” Delgado replied. “But I will do everything in my power to make sure it sees the light of day.”
Similarly, Atwell asked if he supported impeaching President Donald Trump, whom he called “mentally ill.”
“I’m going to do whatever the truth requires me to do,” he said. “This process has been thorough and extensive, but I intend to read the Mueller Report and make my decision from that.”
Candace Shannon, Brookwood School board president, asked what he would do to support students struggling with poverty in rural schools, as well as those in need of special needs and mental health services.
“Our young people are being left behind,” Delgado said. “We spend more money on corporate welfare than we do on the Department of Education. We need to invest in education, including Universal Pre-K.”
He also said he supported a variety of student-loan debt-relief programs, including loan forgiveness for public service jobs, such as the Peace Corps or Teach for America. “Young people feel paralyzed by their debt,” he said. “The government needs to step in, lower the interest rate on student loans and free up young people to the business of living their lives freely.”
A member of the Ag Committee, he spoke about farm bills, which he wants to see give small farms the same access to programs such as value-added products, that corporate and “mega-farms” do.
“We need to prioritize rural farmers,” he said. “I drive this district, and I don’t see corporate farms, but for too long, that concentration
of wealth and power is sucking the life out of communities like ours.
But guess what? I’m on the Ag committee.”
Following the meeting, Delgado stayed to meet and greet with constituents, including posing for photos. He lamented that he hadn’t had a chance to talk about infrastructure and the opioid crisis, both issues which he is concerned about.
“Eighty percent of the roads in this county are in disrepair,” he said. “We need to support rural infrastructure, and that includes highways, but it also includes rail, cell service and broadband. Robust infrastructure can do that.”
He also wants to decriminalize drug use, focusing on treatment rather than incarceration. “We need more treatment centers and better treatment,” he said. “And we need to make sure companies who are over-prescribing highly addictive medications are held accountable.”
Delgado will host an open house 2-4 p.m. Wednesday, Feb. 20 at his new Oneonta Office, 189 Main St, Suite 500.
“I am here to be your representative,” he said. “I am only beholden to you.”