The CDC website says there is growing evidence droplets and airborne particles can remain in the air and be breathed in by others, and travel over 6 feet

Analysis: New signs of Covid-19 complacency even as the American death toll nears another dreaded milestone

Analysis: Australia's coronavirus lockdown strategy worked. Could this be a model for the US?

Most of the US is headed in the wrong direction again with Covid-19 cases as deaths near 200,000

Testing czar on Trump rallygoers not wearing masks: Biology is independent of politics

Pelosi confuses some during interview on SCOTUS fight

150 Years Ago
Oneonta Business – A.C. Moody and E.M. Vosburgh have formed a co-partnership in the stove, tin, hardware and glass-ware business. They will remove April 1 to the building now occupied by Peck and Coats. They will buy hides, pelts, dekin and veal skins, rags, metals, scrap iron, old newspapers, old books and all other kinds of paper stock – in fact everything in the way of barter that a tin peddler can carry on his cart or ship by rail. We think the firm will do a lively business.
All lovers of good coffee know that the fresh roasted and fresh ground article is always the best, and all such in this vicinity can now be accommodated either with the best Rio, Java, or Mocha with all their delicate flavors preserved. Call on Capt. Fox and see the machine.
February 1869

125 Years Ago
The Local News – Young David Alger was arrested last week for assaulting Tony the Italian peanut vendor on Broad Street when Tony refused to sell Alger any more cider. David was tried before Justice Scott who gave him 90 days in Albany.
The special car of the United States Fish Commission was in town yesterday and left 500 yearling “VonBehr” or German brown trout for the Oneonta Fish and Game Association. The fish which were three to four inches long were placed in the Charlotte Creek.
No one who saw the large audience at the theatre Saturday evening would have imagined that the cry of “hard times” had ever been heard in Oneonta. Hi Henry’s Minstrels, who gave a very satisfactory entertainment, reaped very substantial benefit from the crowded house, and as they traveled in their own car and fed and lodged themselves they must have carried out of town practically every dollar taken in.
February 1894

100 Years Ago
Approximately one-tenth of the population of the United States is composed of un-naturalized aliens, according to Raymond F. Cryst, deputy commissioner of naturalization, who declared today that such a condition would not be permitted by any other country. Mr. Cryst appealed to American citizens in helping make citizens of alien residents. He said there were 10,500,000 persons in this country who still retain their allegiance to the land of their birth. “There are now 17,500,000 aliens in this country, yet barely six million have become citizens,” Mr. Cryst said. “Such a tremendous unassimilated mass means danger, for among these millions comparatively few have any knowledge or interest in American institutions. It is our duty and our necessity to convert this multitude into loyal American citizens. By gathering in their own quarters in large industrial centers, they furnish a fertile ground for all sorts of propaganda opposed to American institutions.”
February 1919

80 Years Ago
President Roosevelt declared tonight that the nation “never had greater need of the Boy Scouts” than it has at present. Saluting the youth organization on its 29th anniversary, the President, in a radio talk from the White House, said the scouts were a “national asset and therefore should be regarded as a national trust.” “Ours is the duty,” he added, “to inculcate in the scout mind those simple fundamental principles which embrace strength of body, alertness of mind, and above these and growing out of them that sense of moral responsibility upon which all sound character rests. “In building up solid character we are insuring the future strength and stability of the nation.” In his earlier days, the Chief Executive was active in scout work for 17 years.
February 1939

60 Years Ago
Construction this year of a Health and Physical Education Building for Oneonta State University College at a cost of $2,235,000 has been recommended in the budget proposed by Governor Rockefeller, Dr. Royal F. Netzer, college president, disclosed yesterday. Also schedule for construction here, starting this fall, are another dormitory, at an estimated cost of $900,000 and a dining hall at a cost of $600,000. Already under construction and scheduled to be completed this fall are a $900,000 dormitory and a $931,000 library, totaling $1,831,000. Dr. Netzer also disclosed that funds were authorized for the planning of a new science building at a cost of $1,500,000 which would be located immediately east of the Home Economics building.
February 1959

40 Years Ago
Jack Graves of Manley-Graves Associates, an Oneonta businessman, will rehabilitate the nearly forgotten second floor of 211 Main Street above Triangle Shoes to create a “miniature street” of retail businesses. Now housed in the Oneonta Hotel, Manley-Graves Associates will move to 211 Main Street with the graphics firm and renovate the rest of the second floor for lease to small stores. The second-floor spaces were originally used by a lawyer or accounting firm. Apartments on the third floor of the building look down on the hallway with a skylight above. The effect is that of a miniature street. Graves plans to call his upstairs micro-mall “La Galleria,” a name he says is reminiscent of tiny streets he has seen in Italy. Thus far, Graven has commitments from a women’s sports clothes shop and a bookstore. There is space of 140 to 170 square feet in each store. “I have a feeling it will show what can be done with older buildings,” he said.
February 1979

20 Years Ago
The City of Oneonta’s application for $400,000 to raze the West-Nesbitt feed mill building downtown was mailed Wednesday to the federal government. Joseph A Bernier, Oneonta Community Development Director, said a response is expected in May. The city has requested a Small Cities grant from the U.S. Department of Housing and Urban Development to demolish the mill which is 38,000 square feet of vacant, adjoining structures the south side of Market Street. The West-Nesbitt building closed in 1996, less than a week after an employee died in an industrial accident. The company had been in business more than 70 years. The current owner, who is in debt to the city for about $98,000 in back taxes, supports the demolition proposal and grant application, city officials said. The building is considered a fire and safety hazard and an eyesore that repels re-development projects. Following demolition, the parcel will be restored to have at least a parking lot.
February 1999 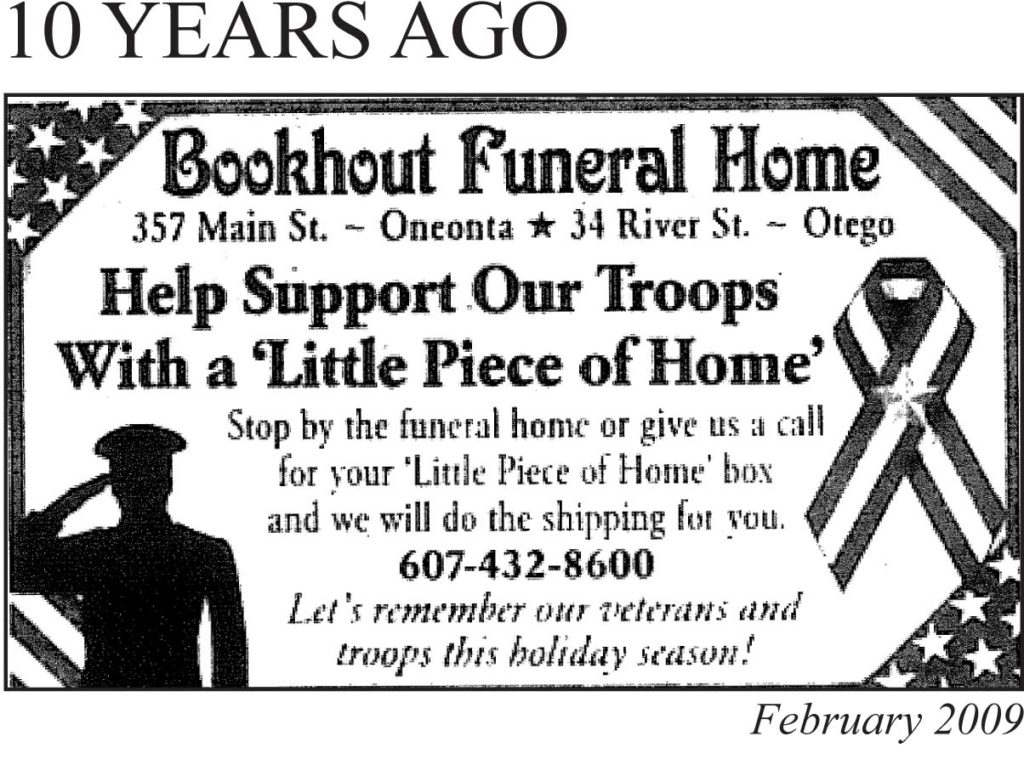 10 Years Ago
The owner of three Minor League baseball teams – you think he’d drive up in a fancy car. That wasn’t the case when E. Miles Prentice III, 66, new owner of the Oneonta Tigers Single A baseball team, drove up Main Street on Thursday, Oct. 29, for the Otsego County Chamber’s “Meet the New Owner” Luncheon at The Clarion. He was driving his family’s Honda minivan.
February 2009