Cooperstown scored seven runs in the seventh inning to stage a comeback against the host Yellowjackets at Joe Hughes Field, 11-9, on Saturday, May 1.

The rally marked the best action for the two teams opening weekend as the two powerhouse programs in the region both beat Norwich, and Oneonta also topped rival Seton Catholic, 9-3, to start the season 2-0 and 2-1, respectively.

The opening of Joe Hughes Field was scheduled for 2019, but with three games in three days this weekend, it was a nice weekend for Oneonta’s baseball coach of more than three decades, he said.

“It was good to get out there and play, finally,” Hughes said following the Jackets’ second game Saturday.

Still, the Class B Jackets losing to the Class C Hawkeyes stung, he said.

“We had an 8-3 lead in the late innings,” Hughes said “They had a good comeback, but when you score nine runs, you are supposed to win.”

The Hawkeyes trailed Oneonta, 8-4, going into the seventh, but Oneonta’s pitching staff was weakened in its 14th inning of the day and Cooperstown took advantage.

Alex Poulson scored the go-ahead run on Alex Hascup’s single through the hole at short, off of senior reliever Tanner Russin.

Cooperstown coach Frank Miosek praised his team for not quitting on the game. He credited two first-time varsity players, sophomore P.J. Kiuber and freshman Emerson Toulson, with keeping the winning rally alive. Derek Moore also had a double during the inning. 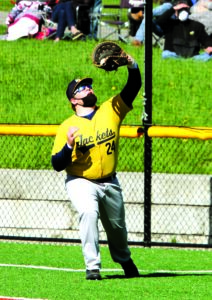 “The whole bench did a good job,” Miosek said. “Emerson Toulson, a freshman, got a line drive in a big situation and then P.J. Kiuber got behind in the count and worked a walk. Those were two big plays and they got us back around to the strength of our lineup.”

Junior Liam Ford got the win in relief, after pitching a strong sixth inning, allowing only a double to Russin.

Starter Chris Ubner came back in in the seventh inning to get the save. Ubner was wild to start the game, but fellow senior Kendall Haney picked him up and kept the game close in the middle innings.

Miosek said Ubner had trouble adjusting to the field’s turf and pitching mound. He was wild late, too, with two walks, a wild pitch and a run allowed in the seventh inning, but he struck out a potential game-tying batter, Seamus Catella, to end the game.

“They got 12 walks, three hits and scored nine runs,” Cooperstown pitching coach Matt Hazzard told his team after the game. “No one is going to tell me we don’t have the best pitching staff in Class C, but we just can’t beat ourselves.

Catella took the loss for Oneonta.

The Jackets had the better of it earlier in the day, toping visiting Norwich, 7-2, in a Southern Tier Athletic Conference game.

Aiden Breakey went three-for-four with two runs, two RBI and three stolen bases, and Owen Burnsworth scored twice to give Oneonta an early lead that the Tornadoes could not catch after the second inning.

Russin started the game for Oneonta, but only went two innings. Aidan Gelbsman pitched three innings in relief, allowing only one hit against three strikeouts. Cole Platt got the win for the Jackets. Russin had a double in the opener, too.

The team’s pitchers were on strict pitch counts for the day, Coach Joe Hughes said, in order to account for covering 21 innings in four days.

Monday, May 4, Oneonta scored seven runs in the bottom of the first inning and never trailed after that, winning 12-3.

Cooperstown got a similar large lead early against visiting Norwich, topping the Tornados, 15-2, at Doubleday Field on Monday. Six of the first seven Hawkeye batters scored in the bottom of the first inning and Cooperstown led, 13-1, after three innings.

Treston Emerick got the win for Cooperstown and Trey Bates took the loss for Norwich.

Ubner, Haney, Emerick, Moore and Hascup all doubled in the game.