Meghan Markle's pal Jessica Mulroney is being eyed by publishers to dish on their friendship, source alleges 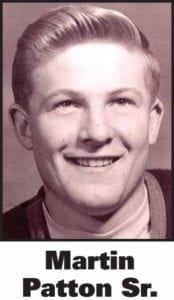 ONEONTA – Martin R. Patton Sr., 89, who played semi-pro football before returning home to a career in restaurants and real estate, passed away peacefully at home surrounded by his family on March 9, 2019.
Born Jan. 6, 1930, in Oneonta, the son of Martin Brown and Agnes Jenette (Hanes) Patten, he lost his dad in 1948 in a farming accident.
Marty worked for D&H Railroad the summer of 1948 and a bell hop at the Oneonta Hotel nights, graduating from Oneonta High School in 1949.
He started working as a salesman for Stringers selling Kaiser/Fraiser cars, and in 1950-51 worked nights at Lynn Coach, operating a 7A turret lathe. Following high school, he played semi-pro football for several years.
He married the love of his life Gina V. Colone on Nov. 23, 1952 at St. Mary’s Catholic Church in Oneonta. She was a telephone operator.
Marty then worked for NYSEG from 1952 to 1963 as a lineman. He became a well-known businessman with the purchase of Zummo’s Market. Jack Zummo taught him how to make his famous sausage and to cut sides of beef for the display case. Marty added an ice cream parlor and purchased a food truck, selling subs and pizza at SUNY Oneonta and Hartwick College. He later leased the building for a restaurant, and then opened the Fiesta Restaurant in that location.
He was the owner of Susquehanna Glass and East End Coin Laundry and managed Emmons Estates for five years, and began purchasing multiple commercial buildings and apartment buildings, including property on Southside, including the House of Brides.
He was a member of St. Mary’s Catholic Church. He enjoyed winning at cards, doing puzzles and walks down his driveway.
He is survived by his children, Martin and his wife, Brenda Patton and stepsons, Eddie and Patrick Grace, and the late, Sean Grace; Cynthia and husband, Joseph Marino; Paula and her husband, Allen Fassler and daughters, Alexandra and husband, William Barrus and Vanessa; Patricia Bettiol, and her late husband, Eugene Bettiol Jr. and daughters, Carleigh and Brooke; Pamela Patton and son, Bradley; a brother, the late Frank and his wife, Lorraine Patten; sisters, Agnes DeShaw, the late, Dora and her late husband, Andy Colby and the late, Flora Patten; a sister-in-law, Mary and husband, Duane Hathaway; brothers-in-law, Philip and wife, Jeanette Colone, Arthur and wife, Denise Colone, John and wife, Marianne Colone and the late Herman and his wife, Eileen Colone; as well as many nieces, nephews and cousins.
He was predeceased by his wife, Gina on October 24, 2010; his parents, Martin and Agnes Patten; and nieces, Susan and Annette Colone and Donna Hathaway.
Visitation will be 2 p.m. to 4 p.m. on Thursday, March 14, 2019 at the Lewis, Hurley & Pietrobono Funeral Home, 51 Dietz St., Oneonta.
The funeral mass will be 10:15 a.m. Friday, March 15, 2019 at St. Mary’s Catholic Church, 39 Walnut St., Oneonta.
Donations may be made to the Parkinson’s Foundation, 200 SE 1st St., Suite 800, Miami, FL 33131.
Arrangements are entrusted to the Lewis, Hurley & Pietrobono Funeral Home.