By the time you read this, “Mary’s Plan” for the redevelopment of Notre Dame de Paris may be on the desk of France’s president, Emmanuel Macron.
“We’re going to print this plan on beautiful paper and send it directly to the palace” – the Palais de l’Élysée – “with beautiful photos,” said Jim Belleau, as he prepared to mail the material earlier this week; it is also being sent via email.

Packets are also en route to the Pope, and to the French Ministry of Culture, said Belleau, owner of Principally Prints, the Chestnut Street framing shop.

In his view, the Oneonta-born plan will come to Macron’s view at the optimal time: “The cathedral is gutted, ready to be repaired.”

The iconic cathedral was damaged by fire on April 15, 2019, its wooden roof trusses burned and the upper part of the cathedral’s walls weakened.

Belleau, who is spiritually inclined, said he’d pledged a life of service to St. Mary during a visit to Our Lady of Lourdes Shrine during a 2017 trip to France.

A year ago, it came to him: He was being called to design “Mary’s Plan” for the cathedral as a result of that pledge.

By summer, the plan had taken shape.

“The primary element is the pyramid, planned on top of the crucifix of the roof of the cathedral,” he said, noting that all cathedral roofs are cross-shaped.

The pyramid – as well as new spires on the bell towers – would likely be made of a form of plexiglass, milled to the color of the Parisian sky at noontime, and the Smart Lighting would maintain that color throughout 24 hours.

“Thus, Mary’s blue will become the beacon of the 21st century,” he said.

I.M. Pei’s pyramid is nearby at the Louvre, and the similar concepts will reinforce each other.

The Oneonta plan only focuses on the roof and spires. 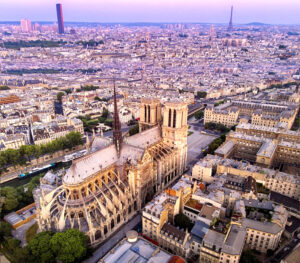 A multi-billion dollar plan for the complete renovation of the Medieval cathedral, built in 1163-1345, was approved by Macron on July 9.

In 2008, Belleau had written a book on Bob Marley,
and in August he reached out to Junior Marvin, lead guitarist for The Whalers, Marley’s band, for guidance on publicizing the effort.

Marvin arranged for him to meet Jonathan Silver of Cumulus Media in New York City, which designed the “Mary’s Plan” Facebook page and accompanying website.

“We’re getting a strong reaction in Paris,” Belleau said, which he welcomes: It puts the concept in the public eye.

From his experience at Lourdes, Belleau had concluded the world, to date, has been “oppositive – good, bad; tall, short; beginning, ending. Duality is a tough game to play; it’s a difficulty way to live life.”

His understanding of Mary’s message, he said, is to escape that duality. Faced with conflict, adherents should step back and find the middle way that suits them best.

For the time being, Belleau is seeking to publicize Mary’s Plan to the degree he can, seeking media outlets here and in Europe.

“I want to expose as many people to this event as possible so the people who feel the importance of this can really get behind it,” he said.

If it’s meant to happen, it will, he says philosophically.