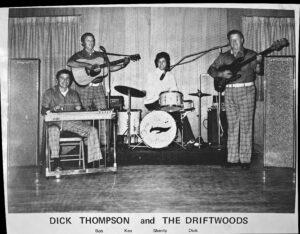 John Thompson – he owns Advantage Maytag in Oneonta with his father-in-law, John Elderkin – and I have been best friends for nearly five decades now. We first met as fellow percussionists in the Cooperstown Central high school band when he transferred in from Milford and announced upon arrival that he had been drumming in his dad’s band since he was 11 years old.

Probably not the best way to ingratiate yourself to a bunch of teenaged boys prone to goofing around in the back row of the band room while the rest of the musicians struggled with technical stuff like reading music and tuning instruments while we just waited for our turn to hit something with a stick. The teasing began in earnest when John told us his dad’s band was The Driftwoods and they played country music.

Country music? To my 1979 ears, that meant “Hee Haw” cornball that couldn’t hold a candle to my steady diet of FM-radio rock and Beatles records.

Despite our initial back-and-forth snarling about whose music was “better,” John one day brought in “Seven Year Ache,” an album by Johnny Cash’s daughter, Rosanne. “Take this home and just listen to it,” he said. I did so, reluctantly, and left it by my bedroom stereo until I got sick of his “did you listen to it yet?” pestering. I put it on, and by the third track on side one – the ballad “Blue Moon With Heartache,” I was sold. Not just on Rosanne, but on every musician on that record. I wanted to know more.

Pretty soon John and I were trading “you’ve gotta hear this” piles of albums – he’d hand me records from Rodney Crowell, Willie Nelson, and Merle Haggard, I’d force-feed him things from the likes of Nick Lowe and The Who. We found unexpected common ground in Elvis Costello who, at the time, was just branching out into country music by performing with genre stalwarts like George Jones and Ricky Skaggs.

The summer before I went off to college, John invited me to sit in on a gig and play drums with The Driftwoods. I’d never played in a band per se, and I told him I didn’t know the music. “Don’t worry,” John said. “Dad will walk you through it.”

John’s dad, Dick Thompson – I know a lot of you remember Dick – was a great guy all around and a drummer’s dream as a bassist. All I had to do was watch his right hand as he plucked through an absolute downbeat; no matter the song, I knew where the tempo was because the guy was like a clock. He’d just call out songs that ranged from the standard to the outrageously obscure, 90 percent of which were absolutely foreign to me. Yet the more I played, the more I dug the deep cuts. I still have the bumper sticker the band sold at its shows: “If you don’t like country music, you don’t know Dick.” I can confirm.

John retired The Driftwoods after Dick died in 2004, but revived it a few years ago as an excuse to go back to play some classic country music just for fun. They’re letting us out in public this weekend at our favorite place to play – The B-Side Ballroom in Oneonta, where Wayne and Rebecca Carrington created a music-friendly atmosphere that brings out the best in us every time. John is at the lead with umpteen beautiful guitars he’ll bring from his arsenal; we’ve got New York State Country Music Hall of Famer John De Maille on pedal steel, on bass we have Jody Taylor – Otsego County’s Director of Weights and Measures and the only person out there who could step into Dick Thompson’s shoes. Jason Wicks takes a night off from his own great band to join us on vocals and guitar to bring us a whole new catalog of songs and a fine night out for all.

These guys make it fun to play music which, last I checked, is what it’s supposed to be about in the first place. I think we do a pretty good job of passing that fun along to the audience and holding up the legacy of the band Dick led for 50 years. Come on out and see us!

2 thoughts on “Playing in the band”