Protester's message for looters: Something is wrong with you

Fires are burning. Tear gas canisters are flying. Rubber bullets are being shot at protesters. This is what's happening now.

Law enforcement presence in Twin Cities will 'triple in size'

'This is very different than what we saw last night'

LA Mayor Garcetti calls for National Guard help: 'This is no longer a protest. This is destruction'

Protesters destroy police property, smash and burn cars as riots continue across US

St. Paul mayor walks back claim that all arrested in riot were from out of state: ‘I take full responsibility’

COUNTY BOARD OF REPRESENTATIVES, DISTRICT 14 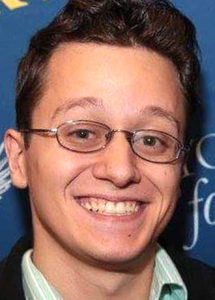 COMMUNITY OF RESIDENCE: Wilson is a lifelong resident of the 8th Ward of Oneonta.

EDUCATION: Wilson graduated from Oneonta High School in 2014, and will be graduating from SUNY Oneonta in May of 2018 with degrees in Political Science and Criminal Justice.

PROFESSIONAL EXPERIENCE: Wilson has worked as a Studio Engineer at TownSquare Media in Oneonta, a teacher’s assistant at Oneonta Nursery School, and the Coordinator of Outreach on the re-election campaign of Senator Rand Paul in 2016.

COMMUNITY INVOLVEMENT: Wilson has supported and volunteered for a number of local organizations, including Orpheus Theatre, Oneonta Little League, and Oneonta Nursery School.

FAMILY: Parents George and Kelly Wells have lived in Oneonta for decades, uncle Sean Farrell is an Oneonta Town Justice.

PHILOSOPHY OF GOVERNMENT: The government exists to represent all of their constituents, not just those in the representative’s own political party.

MAJOR ISSUES FACING OTSEGO COUNTY: The county needs to address the constant, year-over-year overspending. Spending over $250,000 a day is not being responsible to the taxpayers. We have to cut spending, and then proceed to cut taxes; The county needs to return to full and absolute governmental transparency. Our representatives need to be more accountable and accessible to us, the taxpayers; Partisan gridlock keeps any real change from happening. It’s important to elect representatives who will represent every one of their constituents, and not just those in their own party; Otsego county needs help overseeing the day-to-day operations of the county, however appointing an unelected bureaucrat is dangerous. We have to make sure the Board is not a rubber stamp yes vote to the first county manager that comes along. We must ensure fiscal responsibility; The opioid crisis is beginning to creep into our area and we must address the issue head on. The numbers bear out the fact that the current approach, treating these people like criminals as opposed to people who need help, simply does not work. We must do everything we can to help this people reintegrate into society, as opposed to locking them up and throwing away the key.

MY QUALITIES: Wilson has a unique combination of energy and experience. He will be accessible to every one of his constituents at all times, he will work tirelessly to improve quality of life in Otsego county, and will never give up on his principles.

STATEMENT: This country was founded by, and has been protected by, since day one, young men and women. More than a dozen of the signers of the Declaration of Independence were under 35 years old when they signed. The average age of the men that stormed Normandy Beach was 20 years old. And the average age of the American soldier in Vietnam was just 19 years old. 51% of the world’s population is under 30 years old. The future of Otsego County can include a road back to prosperity. As my former boss Senator Rand Paul once said, it’s time for a new way. A new set of ideas. A new leader. One you can trust, who works for you. I am running to take Otsego county back and give it to the people! Thank you to everybody who is taking the time to learn about the candidates, and for voting on Tuesday, November 7th at Foothills in Oneonta.

One thought on “questionnaire — wilson wells”