‘Ponies, Pumpkins and Puppies: Oh, My!’

News from the Noteworthy: County Offers Host of Services for Seniors

Shared Garage Back on Otsego’s Agenda

For Sale: One Cider Mill In Fly Creek 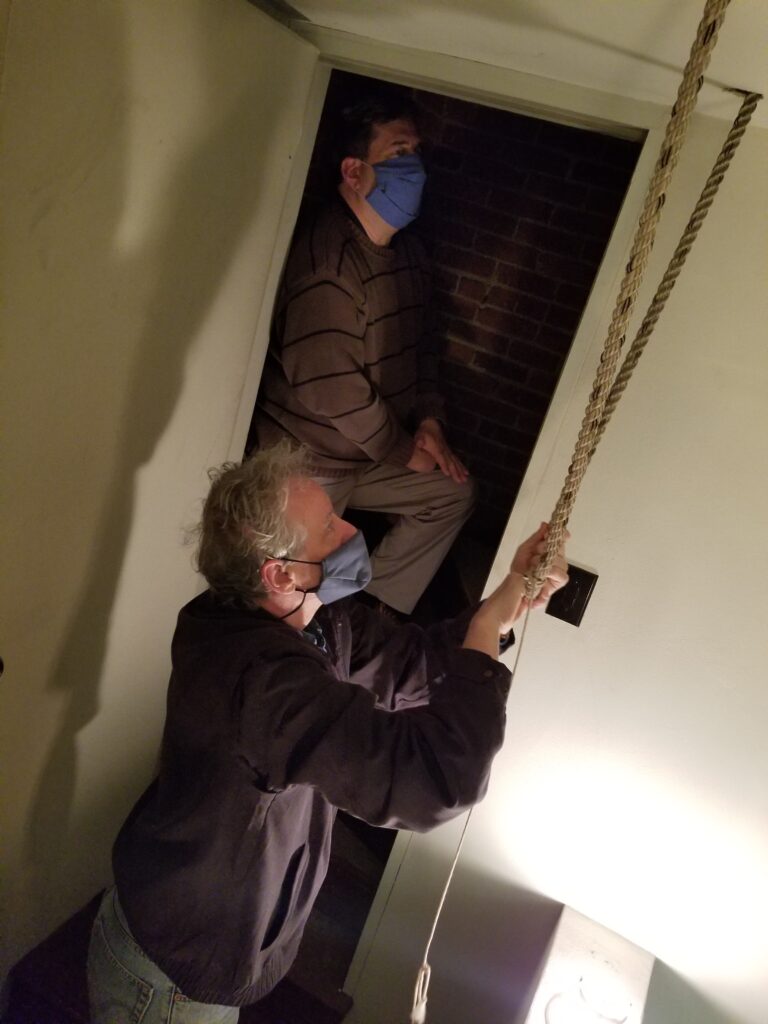 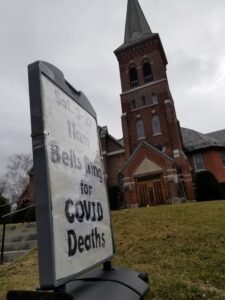 Chris Gustafson, top, counts the chimes as Rev. Mark Montfort rings the church bell at First Presbyterian Church in Oneonta this morning. Today marks the one-year anniversary of the passing of Brenda L. Utter, Morris, who was the first COVID related death in Otsego County.  In the year since Utter’s passing, 55 residents have died from COVID-19, and this morning members of the congregation took turns ringing the bell in memory of those lost. “This is a somber anniversary for the community,” said Montfort, “We didn’t ring the bell for those who believed the way we do, vote how we vote, or for any other consideration. We’re all in this together and each loss is a loss for everyone. We rang the bell for all who have gone on and for everyone who is still here.” (Ian Austin/AllOTSEGO.com)

ONEONTA – Oneonta City Judge Lucy Bernier announced her retirement this morning; and Attorney Bob Gouldin this afternoon announced his candidacy to succeed her. Both are Democrats.

Gouldin is the only candidate to have filed his petitions by the deadline of Thursday at 5 p.m.   However, independent candidates can circulate petitions by May 25 to get on the ballot.

The candidate has lived and practiced in Oneonta for over 20 years, and was recently appointed city prosecutor by Mayor Gary Herzig.   Before that, Gouldin had been a part-time county public defender for 15 years, focused on representing indigent defendants in City Court.

END_OF_DOCUMENT_TOKEN_TO_BE_REPLACED

Bells Will Be Tolled, Once For Each Local C-19 Victim

Bells Will Be Tolled, Once

For Each Local C-19 Victim

The bell will be rung one time for each local COVID victim; several church members, and some children, will participate in the bell-ringing, according to the Rev. Mark Montfort, pastor.

As of this afternoon, there were 55 deaths, according to the county Health Department.  The county’s first victim was Brenda L. Utter, 63, of Morris, who passed away at Bassett Hospital on March 27, 2020.

After 19 Years, Bernier To Retire As City Judge

1ST WOMAN IN MANY ROLES

To Retire As City Judge

ONEONTA – After 18 years as Oneonta City Court judge, Lucy P. Bernier, who broke the glass ceiling in many of the county’s legal roles, will retire from the bench when her term expires at the end of this year. She was the first woman to serve as city judge here.

“It has been an honor and privilege to serve the community as judge, and I am grateful for the trust the people of Oneonta placed in me. I’ve worked hard to make sure each person who came before me was accorded their legal and constitutional rights, that they were treated respectfully and fairly, and that fair and just decisions were rendered,” she said in a statement.

She was initially appointed to the bench in 2004 for a six-year term by Oneonta City Mayor Kim Muller, and was elect in 2009 and 2016 to six-year terms.

END_OF_DOCUMENT_TOKEN_TO_BE_REPLACED

County To Act Tomorrow On Its Findings

ONEONTA – With City Hall expecting to miss its deadline on submitting its review of the OPD to Albany, Common Council is planning a public hearing at 7 p.m. Thursday, April 1, to allow input into the recommendations.

In the meantime, the city’s Community Advisory Board will meet Tuesday, March 30, in an attempt to finalize its recommendations.  “Hopefully, by the end of that meeting, (the CAB) will have agreed upon a draft, which will then be made public” in advance of the hearing two days later, Mayor Gary Herzig said.  The mayor anticipates the report will be in Albany by April 20.

The Village of Cooperstown approved its CAB review at the end of February, and the county Board of Representatives is meeting at 9 a.m. tomorrow (Thursday, March 25), to finalize its report in time to meet Governor Cuomo’s deadline.

END_OF_DOCUMENT_TOKEN_TO_BE_REPLACED

Getting A Vaccination?  OPT Will Take You There For Free

Getting A Vaccination?  OPT

Will Take You There For Free

ONEONTA – Oneonta Public Transit is offering free rides on all its buses to the SUNY Oneonta mass-vaccination site to the Dewar Arena.

The mass-vaccination site has been operating since last Thursday, 12 hours a day, seven days a week, and had administered the anti-COVID virus to 7,000 people by Tuesday.

Sworn In At Park

ONEONTA – Ernest Goodman passed away from natural causes at the age of 96 at Cooperstown Center.

He was born Ernst Josef Guttmann in Breslau, Germany (now Wroclaw, Poland), to Rose (Wagner) and Herbert Guttmann, and their large and thriving family.

In November 1939, at age 14, he became one of almost 10,000 German and Austrian Jewish and non-Aryan children rescued by the British government in what became known as the Kindertransport.  His older brother and only sibling Henry had gone before in the Spring of 1939.  Parents sent their children ranging from infancy to 17 years of age to the British Isles, for adoption or work, in a desperate attempt to save them from the Nazis.

END_OF_DOCUMENT_TOKEN_TO_BE_REPLACED

ONEONTA – Looking forward to continued easing of COVID restrictions, Oneonta’s First Night Committee announces it is planning a “robust” Hometown Fourth of July celebration this year, according to David Hayes, an organizer.

The Hometown Fourth was canceled last year, due to COVID, as was the other major Fourth of July event in the county, the Springfield “oldest in the nation” parade, which has been cancelled again this year.

END_OF_DOCUMENT_TOKEN_TO_BE_REPLACED

ONEONTA – Christy Schiele passed away peacefully on Saturday, March 13, 2021, with her loving family by her side.

Christy was born in Brooklyn on Feb. 16, 1938.  She lived for a time in The Bronx and Carmel, N.Y., and then spent her early years in Briarwood, a section of Jamaica, N.Y.  After high school, her desire to see the world led her to employment as a stewardess with Capitol Airways which afforded her the ability to visit many of the great cities of the world.

END_OF_DOCUMENT_TOKEN_TO_BE_REPLACED

Opening Delayed A Day, Until Friday

ONEONTA – The opening of the COVID-19 mass-vaccination site has been delayed a day, until Friday, but Governor Cuomo today confirmed the initiative is a go.

“We have a wide network of COVID vaccination sites and the state is moving full steam ahead opening even more,” the governor said today in announcing nine state-run sites and the 10th, at SUNY Oneonta’s Dewar Arena, which will be operated by Bassett Healthcare Network in collaboration with the state.

“New York needs to be ready for the next increase in supply, and these sites located throughout the state will help bring residents and their families peace of mind and get us a step closer to defeating the COVID-19 pandemic and restoring a sense of normalcy,” the governor said at today’s COVID-19 briefing.

END_OF_DOCUMENT_TOKEN_TO_BE_REPLACED

CLINIC TO OPEN AT

It Will Be Open 7 Days A Week,

It will be the first such clinic in the state operated by a healthcare network, along with nine new state-run sites announced by Governor Cuomo today.  It will be open seven days a week, administering 1,000 shots a day.

Registration can begin tomorrow. (See below)

“Bassett is extremely proud to partner with New York State, SUNY Oneonta, and other key stakeholders in our communities to launch this tremendous operation,” says Dr. Tommy Ibrahim, Bassett president/CEO.  “This is a critical step forward for our region in the fight against COVID-19.”