One arrested in face stomping

More than 50 shots fired in neighborhood

Veteran goalies getting their shot in Stanley Cup playoffs

When can we stop wearing masks? 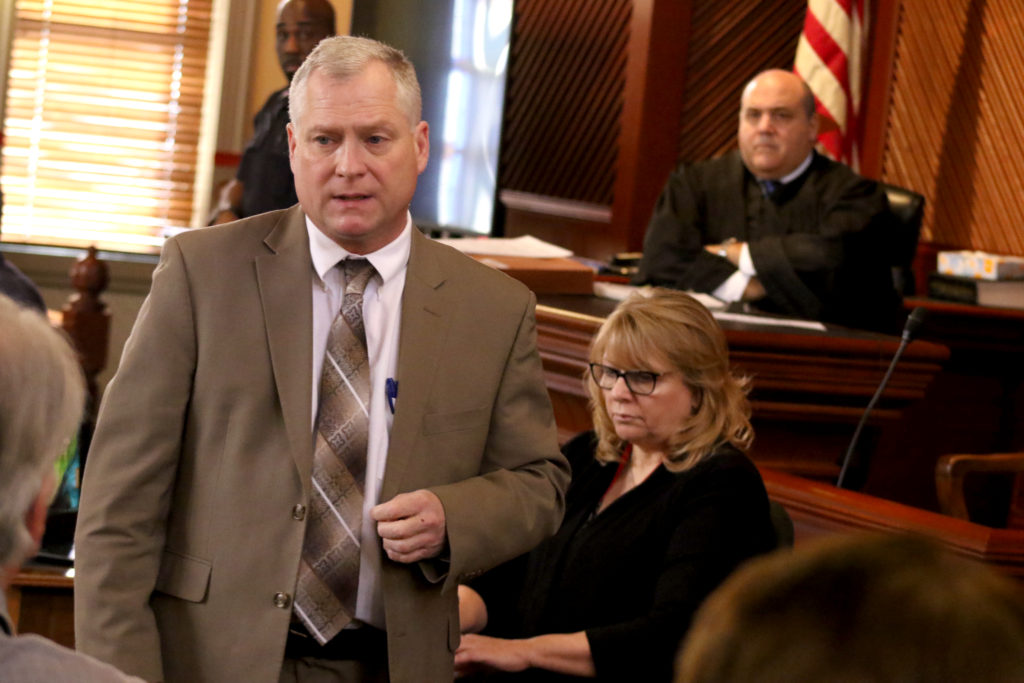 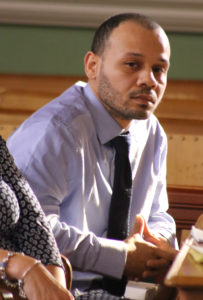 District Attorney John Muehl, above, makes his opening remarks to the jury during the opening day of the People Vs. Gabriel Truitt, now underway at the Otsego County Courthouse in Cooperstown.  Truitt, seen at right, is charged with arson in the first degree and murder in the first and second degree for his alleged involvement in the fire that claimed the life of John Heller at 5 Walling Ave. in Oneonta on Dec 29, 2018. Check back throughout the day for developments in this case. (Ian Austin/AllOTSEGO.com)

ONEONTA – With a motion to suppress evidence rejected this morning, Gabriel Truitt, charged with the murder of John Heller after he allegedly lit his girlfriend’s Walling Avenue apartment on fire, will stand trial in Otsego County Court Jan. 20. 2020.

During a hearing this morning in front of county Court Judge Brian Burns, Truitt’s lawyer Dennis Laughlin submitted motions to suppress photos and video taken inside of Truitt’s Tru Cuts that allegedly showed him taking the chemicals allegedly used to start the fire at 5 Walling Ave.

END_OF_DOCUMENT_TOKEN_TO_BE_REPLACED

Truitt Located In House Next To Police Department

Of House Next Door

ONEONTA – Less than a week since a grand jury indicted Gabriel Truitt, 33, on first-degree murder, one count of first-degree arson, and two counts of second-degree murder in the Dec. 29 death of John Heller, 38, Oneonta Police have arrested him at 95 Main St.

The two-story apartment house is right next door to the Public Safety Building, police headquarters.

END_OF_DOCUMENT_TOKEN_TO_BE_REPLACED

Hero May Not Have Been Target, Chief Concluding

Of Interest, Can’t Be Located

ONEONTA –With one arrest, 100 leads and a “person of interest” who can’t be found, Oneonta Police are still piecing together what happened during the blaze that killed a man hailed as a “hero” on Saturday, Dec. 5, at 5 Walling Ave.

“We’re not sure what (Terrence) Truitt was trying to do,” Police Chief Doug Brenner said of the suspect facing a charge of arson, first degree. “It looks like Heller was in the wrong place at the wrong time.”

Truitt, 34, is now accused of setting a fire on the second-floor that killed former Oneonta firefighter John Heller, 38, in his third-floor apartment. Truitt was arrested and charged with arson, first degree, Monday, Dec. 31, and appeared in City Court for a felony hearing on Friday, Jan. 4.

“We had information that didn’t line up with what (Truitt) had first told me,” said Oneonta Police Detective Sgt. Branden Collison. “He kept changing his stories.”

But police are seeking the whereabouts of his brother, Gabriel Truitt, whom they are calling him a “person of interest,” but providing no further explanation.

Though initially interviewed at the start of the case, Brenner said he has not been seen or heard from since.

“We’re trying to figure out to what extent Gabriel is involved,” he said.

END_OF_DOCUMENT_TOKEN_TO_BE_REPLACED

ONEONTA – An Oneonta man was arrested after police and fire investigators allege he set his neighbor’s car on fire earlier this afternoon.

Jonathan Delgado, 31, was arrested after the police and fire department were dispatched to the report of a vehicle fire in the area of 41 Burnside Avenue.  First responders arrived at the scene to find a red 2009 Subaru Forester, belonging to a neighborhood resident, fully engulfed in flames.  The Oneonta Fire Department extinguished the blaze as police officers conducted a neighborhood canvass and located Delgado, who was detained during the early stages of the investigation.

END_OF_DOCUMENT_TOKEN_TO_BE_REPLACED

“The fire at the motel really threw a monkey wrench in the middle of everything,” said Tillapaugh, referring to the Aug. 9 suspected arson at the corner of Chestnut and Beaver streets.  At the time, CVS had expected to close on the property “within a few days,” he said.

END_OF_DOCUMENT_TOKEN_TO_BE_REPLACED

COOPERSTOWN – Investigators have determined the fire that destroyed the Cooperstown Motel in the early morning hours of Tuesday, Aug. 9, was intentionally set, they announced at 1:15 p.m. today.

Investigations by the state Office of Fire Prevention & Control, county Office Of Emergency Services, state Department of Financial Services and the Cooperstown Police Department determined that the fire began on the second floor of the abandoned motel.  No further details are available at this time.

END_OF_DOCUMENT_TOKEN_TO_BE_REPLACED

ONEONTA — A 20-year-old was arrested and charged with arson after allegedly setting fire overnight to light poles and shrubbery on the SUNY Oneonta campus with a blow torch.  He is not a student, University Police said.

Zachary A. Penzabene of Ravena, south of Albany, was arrested after University Police responded to a report and found several fires, one on the quad and others near the track, and contacted the Oneonta Fire Department to extinguish them.