ONEONTA – Bruno A. Talevi, still looking fit in his World War II Navy uniform, departed this life and went to grasp the hand of the Lord on April 3, 2021.

“Paw-Paw”, as his beloved grandchildren dubbed him, was born in New York City on Aug. 16, 1925, the son of Peter and Rose Talevi. He grew up on the streets of New York and Long Island, playing stickball, Johnny-on-the-Pony, and pinball, and eventually graduated from Benjamin Franklin High School at 16.

After graduation, he worked for the Office of Strategic Services (OSS), a predecessor to the Central Intelligence Agency (CIA), formed to obtain information to sabotage the military efforts of enemy nations during World War II.

Bruno joined the Navy as soon as he turned 18, assigned to the signal corps, transmitting teletype messages from the South Pacific. Although devoted to the military and a loyal American, he was saddened by the dropping of atomic bombs at Hiroshima and Nagasaki. Honorably discharged, Bruno returned home and met a beautiful young lady – Vera A. Careccio, whom he married on Aug. 22, 1948.

The G.I. Bill enabled Bruno to attend St. John’s University, and he graduated with a bachelor’s degree in Business Administration in 1950. He joined a small accounting firm in New York City for three years, then moved to Oneonta, where his accounting practice grew to be the largest in three counties.

He retired in 1986 after moving to Cooperstown with Vera.

END_OF_DOCUMENT_TOKEN_TO_BE_REPLACED 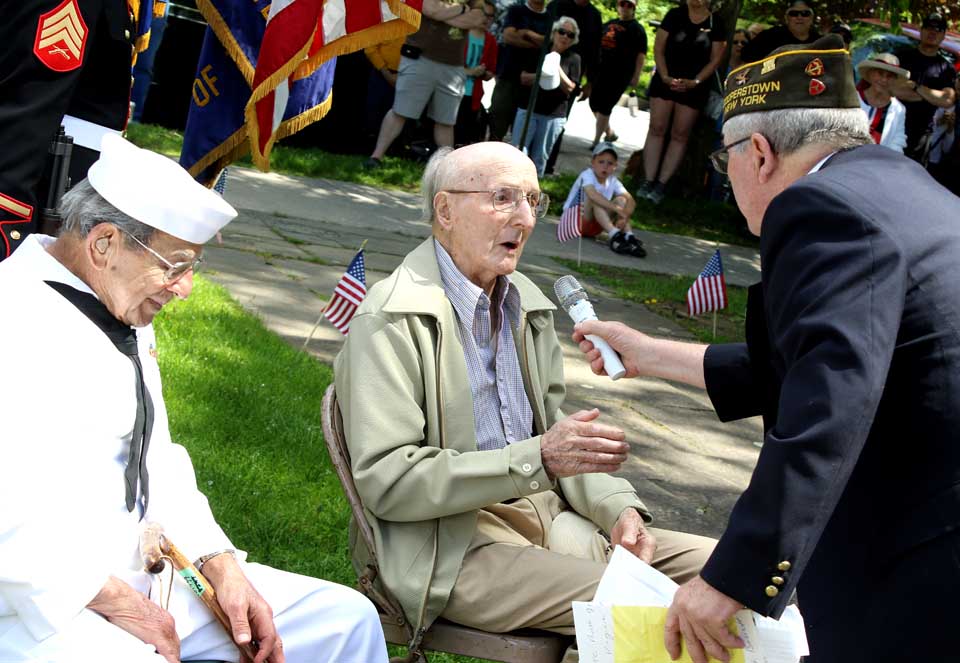 Marine Doug Walker, top photo, Cooperstown Veterans’ Club commander and emcee at this morning’s Memorial Day commemoration in front of the County Courthouse, invites World War II veterans Peter Martin, center, and Bruno Talevi, left, to provide brief remarks to a gathering that filled the lawn, sidewalk and pavement in front of the 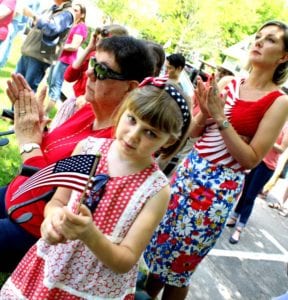 Soldiers’ & Sailors Monument.  Right inset, featured speaker Floyd Bourne, Korean War veteran, remembers attending the same commemoration 73 years ago, “holding my grandmother’s hand.”  A Cooperstown native and retired Richfield Springs CS teacher and coach, he recalled the Navajo Code Talkers of World War II and the 442nd Infantry Regiment of Nisei soldiers –  second-generation Japanese-Americans – fighting in Europe.  “When it comes down to it, we’re all Americans,” Bourne said.  He recalled generations of immigrants who “went to work, they built lives, they built America,” a process he said is continuing today.  Noting that no one’s ethnic background is mentioned when a soldier is buried in Arlington National Cemetery, he concluded, “We’re Americans first.”  Inset left is flag-toting Kensington Kania, attending with her grandmother, Hilda Natius of Coopertown. (Jim Kevlin/AllOTSEGO.com)