Russia offers to help US with Covid-19 vaccine; US says no

Ben Shapiro: Democrats slammed federal presence in US cities, but they want to 'send the feds to yell at you about masks?' 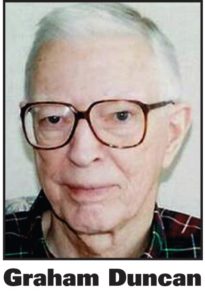 ONEONTA – Graham Duncan, 97, a published poet and 35-year SUNY Oneonta English professor who, with the 87th Infantry during World War II, witnessed Buchenwald’s liberation, passed away on Wednesday, Feb. 6, 2019, at Cayuga Medical Center in Ithaca, following a brief illness.
He was born in Poughkeepsie in 1922 and attended the New York State College for Teachers at Albany and Cornell University.
After completing his doctorate in English, he taught for three years at Russell Sage College and 35 years at SUNY Oneonta. He retired from full-time teaching in 1991.
As a member of the 87th Infantry Division in Europe he was in the Battle of the Bulge and was at the liberation of the Buchenwald concentration camp in Germany.
“Every Infant’s Blood: New and Selected Poems” was published in 2002. His poems also appeared in two chapbooks, “The Map Reader” (1987) and “Stone Circles” (1992), and in numerous well-known journals.
He is survived by his wife, Evelyn of Ithaca; his niece, Elizabeth (husband, Robert Fine) of Seabrook Island, S.C., and their three sons, (Philip, Robert and Logan); his nephew, Brian (wife, Margaret), of Kendall Park, N.J.; his cousin, Rita Gritman of Norridgewock, Maine and her daughters, (Wanda, Donna and Alinda); as well as other relatives and many friends.
He was predeceased by his parents, Herbert A. and Claire Arbuckle Duncan of Poughkeepsie; and his brother, Howard A. Duncan (and sister-in-law, Mary) of Hawthorne.

To The Editor:
My hospital bill from a visit of six months ago just arrived.
The bill says clinic visit $32 (for walking in the door?), laboratory $31.85, then it says contractual adjustment: +$55.46. Then says insurance payment Medicare -$93.54, then it says: Sequestration write-off: -$ 1.91. That was just to use the room!!
Then the next line is the doctor’s fee … on and on it goes. How am I going to understand the online listing if I can’t understand a bill.
I talked to a fellow from Hong Kong the other day. He walks in the door at the hospital in Hong Kong, puts $10 down and everything else is taken care of.
The idea that hospitals have to post their fees is like trying to put a little Band-Aid on a gashing wound that’s pulsing out blood. It ain’t gonna do much good.
It’s actually going to force the hospital to raise rates more because now they have to have people post the rates.
And there’s nothing clear-cut about going to a hospital. The hospitals are the end of the line (pun intended) for our healthcare system. It is the HMOs – CEOs with their millions of dollars in salaries that make costs so high.
Meanwhile they make decisions of what we can have or not have; depending on how much money we
will produce for them so they can make $20 million or more a year. It is the manufacturers as well, who do incredible markups and create monopolies.
So I see the new law to have hospitals post fees is just another way for government and corporations to shift the attention away from them to the hospitals.
This makes the hospitals seem like the bad guys. They are certainly not without blame, but mostly they are caught standing up at the end of the game of musical chairs.
Don’t be hoodwinked, the real problem is much deeper than just posting fees of which most of us we will never understand. You really want to go online to check fees as you are bleeding … to see what you will be able to afford. We need to put a lot of pressure on it….to stop the hemorrhaging before we die of their “care”.