The League of Women Voters hosted the candidates in a debate last week, during which Carson thanked Drnek for joining him in running a “gentleman’s campaign.”

Drnek said he feels he is in “good shape” for the election but the key is voter turnout. He said the whole process has been inspiring for him. END_OF_DOCUMENT_TOKEN_TO_BE_REPLACED

The city of Oneonta has no plans to opt out of recreational sales of marijuana, according to local politicians.

In New York’s legal marijuana bill, which passed April 30, municipalities are able to decide to opt out on marijuana dispensaries by Dec. 31.

However, there is no movement to opt out in Oneonta. According to Mayor Gary Herzig, no one on the Common Council has advocated for the city to opt out.

Herzig said he is in favor of the city taking no action and allowing itself to be a candidate for dispensary licensees to operate in the city. END_OF_DOCUMENT_TOKEN_TO_BE_REPLACED

ONEONTA — The Common Council held a public hearing for the long anticipated vote on the Community Advisory Board Review Committee report Tuesday, Sept. 21, created in response to former Gov. Andrew Cuomo’s directive that police departments create a document of “best practices” by local law enforcement with input from the community.

Only two people spoke at the public hearing, both of whom were supportive of the council passing the report.

Daniel Driver said the report gave him “confidence in how hard the OPD works with few resources, but also cause for concern” and urged the council to consider more social services for those with mental health issues and addiction. He said that police officers were being put in a “untenable position where they have to arrest or interact with folks” who have some of those issues.

“There is a lot more to be done,” Driver said.

Steve Ludner offered “personal gratitude and thanks” for those who worked on CABRC and suggested the council “modify some of the wording” to make “clear that the Community Police Board will have options for community engagement.” END_OF_DOCUMENT_TOKEN_TO_BE_REPLACED

Click here to listen to our interview with Mark Drnek.

Democratic candidate for mayor, Mark Drnek, represents the Eighth Ward of Oneonta and is the owner of Sweet Home Productions and host of the syndicated radio show Blue Light Central.

Click here to listen to our interview with Len Carson.

Republican candidate for mayor, Leonard Carson, represents the Fifth Ward of Oneonta and is a former fire captain for the city as well as a former Otsego County Representative for District 13. He is also the co-owner of DC Marketing.

Jennifer Hill spoke at the meeting at City Hall, saying the ads were dangerous and strongly condemning Carson for his role in putting up the ads.

“It’s unconscionable that a member of the council and one who wants to lead the city to spread false information,” Hill said. “Mr. Carson did not come across as someone who would want to do that. I don’t know what changed.”

END_OF_DOCUMENT_TOKEN_TO_BE_REPLACED

Kathy Hochul, New York’s governor-in-waiting, has made a favorable impression on Otsego County officials the past few years.

Oneonta Mayor Gary Herzig said Hochul had visited Oneonta at least a half a dozen times.

“She has been very supportive of Oneonta’s effort to revitalize and restore our economy,” Herzig said. “I think she’s a true friend of Oneonta. I hope to get her to visit Oneonta in the near future.”

Common Councilmember Len Carson, a Republican who is running for mayor this year, also had positive things to say about Hochul, who is a Democrat.

“I’m looking forward to seeing someone representing New York state that’s from Upstate. It would be nice to see the type of leadership she’s going to bring,” Carson said. “I’m very hopeful that Upstate New York will finally have a friendly ear to our concerns, rather than NYC being the one that gets the attention.”
END_OF_DOCUMENT_TOKEN_TO_BE_REPLACED

Cupcakes on top of books, free drinks provided by Stewart’s and plants were given out at the celebration.

The library turned 100 last year. However, because of COVID, the celebration got delayed. Mayoral candidates Mark Drnek and Len Carson were also on hand, with Drnek providing the PA system for the event.

Drnek, whose ward covers the Huntington Library, said that the library was a “quality of life thing.” which is a key part of his platform and one that he hopes will attract people to the city. He said he is hoping to use “targeted marketing” to attract people from metro areas.

END_OF_DOCUMENT_TOKEN_TO_BE_REPLACED

ONEONTA — The Common Council meeting Tuesday, Aug. 3, began with a message from Mayor Gary Herzig regarding the recent updates regarding the delta variant of the coronavirus.

“We’re all concerned about the variant,” Herzig said. “The numbers aren’t alarming but they are going in the wrong direction.”

Herzig likened it to a race between the virus and vaccinations. “Unfortunately, what we didn’t see coming is the large number of people who didn’t want to get the vaccinations.”

Otsego County has a 57% vaccination rate, Herzig said, which is lower than both the state and national average of 70%.

As of Tuesday, there were three reported new cases in Otsego County, bringing the total cases up to 31, according to the Otsego County Department of Health, making it a 2.6% seven day positivity average.

“If it continues this way, it’s not just the delta variant, we give the virus time to create new variants which could be even worse,” Herzig said. “In the meantime, if you’re not vaccinated, wear a mask and if you are vaccinated, feel free to use a mask as a safety precaution.” END_OF_DOCUMENT_TOKEN_TO_BE_REPLACED

ONEONTA — In a two and a half hour meeting, the issue of housing was forefront as the Common Council struggled to come to agree on the choice of an out-of-city resident as part of the housing commission on Tuesday, July 20.

This appointment was narrowly approved, 4-3, with Kaytee Lipari Shue, Len Carson and Scott Harrington being the dissenting votes.

The motion to appoint Audrey Benkenstein, with the addition of Oneonta resident Peter Friedman, was brought up for a second time after being voted down during the last common council meeting, something that Oneonta Mayor Gary Herzig told AllOtsego.com last week was “mystifying,” since Lipari Shue had pushed for a non-city resident to be on the Arts Commission.

The main point of contention was that Benkenstein was not a Oneonta resident. However Herzig pointed out her appointment was voted down “only minutes after approving a Cherry Valley artist” for the Arts Commission.

END_OF_DOCUMENT_TOKEN_TO_BE_REPLACED

ONEONTA — A committee including mayoral candidates Mark Drnek and Len Carson approved final changes to the Community Advisory Board police review document, which will sent back to the original CAB members followed by a public hearing.

The process should take about a month to complete, according to city officials.

The Community Advisory Board met Tuesday, July 13, at City Hall to follow up on the document, which was prepared in response to Gov. Andrew Cuomo’s executive order for police departments to recommend “best practices” that align with community values. That order and a review Herzig had ordered before Cuomo’s order, were in response to the death of George Floyd in Minneapolis in May 2020. A Minneapolis police officer, Derek Chauvin, was found guilty of Floyd’s murder in April.

END_OF_DOCUMENT_TOKEN_TO_BE_REPLACED

ONEONTA — The Common Council met in person Tuesday, July 6, with an atmosphere of visible joviality and relief after spending a year meeting via Zoom.

“This is something we haven’t done in a long time,” Mayor Gary Herzig said, which elicited some appreciative chuckles.

Some of the agenda items passed included motions authorizing the acceptance of a state grant for the development of Hartwick College’s Grain Innovation Center, which would be located at the future Lofts on Dietz Street, as well as motions that appointed candidates to the recently formed Public Arts Commission and the Housing Commission.

END_OF_DOCUMENT_TOKEN_TO_BE_REPLACED

Photos: Independence Day goes off with a bang in Oneonta

Independence Day goes off with a bang in Oneonta

ONEONTA — Independence Day on Sunday, July 4, drew thousands to the parade and Neahwa Park for fireworks and festivities with the day being dedicated to the essential workers during the COVID crisis.

Mayor Gary Herzig repeatedly said throughout the day that without the essential workers, this day would not have been possible.

“They were here for us all year,” Herzig said prior to the fireworks as he thanked healthcare workers, retail workers, bus drivers and all essential workers.

Herzig, along with mayoral candidate Len Carson and others, also participated in a dunk tank with proceeds going to charity.

During the parade, Oneonta resident and Ninja Warrior contestant Anthony Eardley showed off his skills during the parade by doing stunts on a obstacle structure on top a car.

At Neahwa Park, people lined up to get fried dough, funnel cakes, food from Brooks BBQ, blooming onions and other festive foods.

Herzig reiterated during the parade how important essential workers were to things opening up in Oneonta and the country.

“We were only able to do this because everyone sacrificed and everyone did the right thing,” Herzig said. 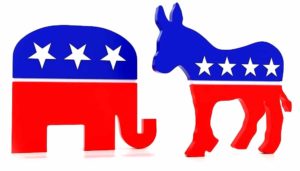 Election Day is still six months away, but in the past few days it’s been off to the races, the local races.

Leading up to Tuesday, March 2, the first day nominating petitions can be circulated, a similar outpouring occurred in races for the Otsego County Board of Representatives.

Get used to it.

The early entries, a half-year in advance of the elections, are required by changes implemented in January 2019 by Governor Cuomo and the state Legislature, then newly in control of the Democrats.

State and local primaries were moved from the second Tuesday in September to the fourth Tuesday in June, to align with federal elections. The idea, Democrats said, was to save money and to increase turnout for local elections.

However, with petitions in local races due to be filed with the county Board of Elections between March 22 and 25, it also extends the campaign season for local offices from four to
six months.

END_OF_DOCUMENT_TOKEN_TO_BE_REPLACED

ONEONTA – Mayoral candidate Len Carson announced a few minutes ago that he received the city Republican Committee’s endorsement this evening to run for the city’s top office in the Nov. 2 elections.  The committee chair is Susan Lettis.

Carson said both he and Craig Gelbsman, who has also indicated he is interested in running for mayor, were at the caucus.  After receiving the endorsement, Carson said he asked Gelbsman if he intended to continue in the race, but Gelbsman was noncommittal one way or the other.