Doug was born on July 22, 1940 in Washington DC, the son of Albert G. and Kathryn (Welch) Fielder. Doug grew up in the DC area and went to Virginia Military Institute, graduating in 1962. He then attended the University of Virginia for his master’s and Doctorate degrees in physics, completing them in 1967. He served two years active duty in the Army, ending at the rank of Captain.

In 1968 he married Dorothy Scott Davis of Staunton, Va. They celebrated their 50th anniversary in July 2018. In 1969 they moved to Oneonta, NY where Doug began teaching at the State University College at Oneonta (SUCO). He taught there until his retirement in 2000. He served as department chair for several years. Doug and Scott lived in Chaseville (Town of Maryland) from 1972 until 2009 when they moved to a home at the Plains at Parish Homestead in Oneonta.

END_OF_DOCUMENT_TOKEN_TO_BE_REPLACED

ONEONTA – Rita Ann Wellman, 81, wife of a SUNY Oneonta professor and a lifelong community volunteer, passed away on Jan. 14, 2020, at her most recent home, the Plains at Parish Homestead.

After graduating from Orange High School, Rita began studying sociology at the University of Connecticut. She transferred to Quinnipiac University and completed her sociology degree in 1960.

END_OF_DOCUMENT_TOKEN_TO_BE_REPLACED

ONEONTA – Florence Emily Kespert, 86, who had lived the Plains at Parish Homestead for the past five years, passed away peacefully on Aug. 10, 2019, at Fox Hospital.

Florence was born on July 19, 1933, in White Sulphur Springs, Sullivan County.  She was the daughter of Dorothy and Leo Bryan. She graduated from Liberty High School.

On May 16, 1953, in Liberty, Florence married Harold Kespert. They settled down in Youngsville to raise their family. They were happily married for 51 years.

END_OF_DOCUMENT_TOKEN_TO_BE_REPLACED

160 Friends Hail Inge Roemer At Plains On Her 95th Birthday

At Plains On Her 95th Birthday 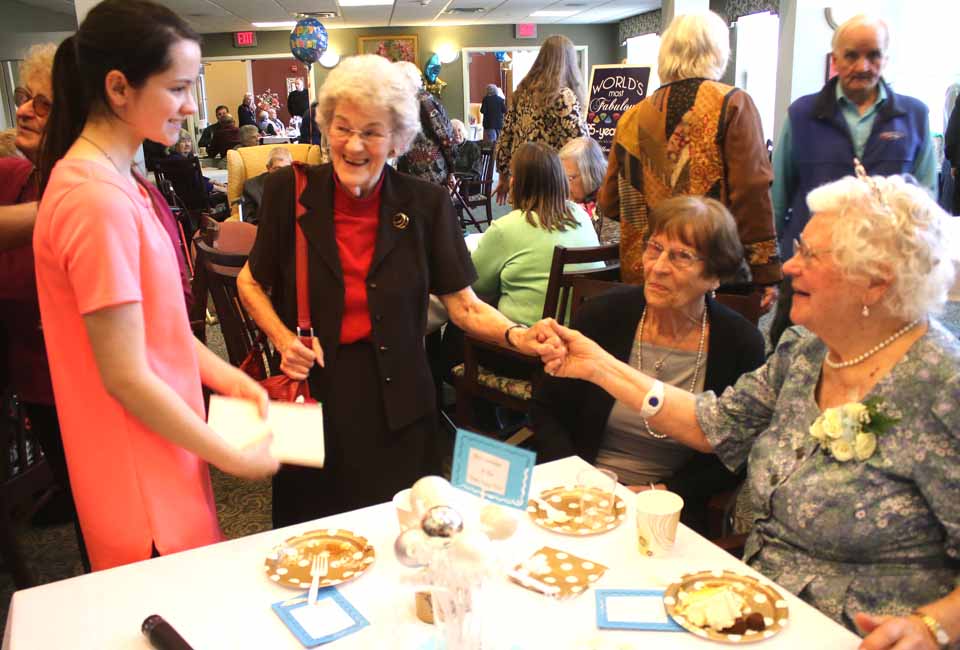 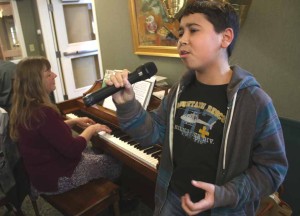 More than 160 family members and friends gathered today at the Plains at Parish Homestead to honor Inge Otten Roemer on her 95th birthday. At native of Hamburg, Germany, Mrs. Roemer and her husband, Martin, farmed in Unadilla, beginning in 1947. She obtained an bachelor’s in elementary education from SUNY Oneonta in 1959, and taught at Mount Upton Central School, retiring in 1982.  She and her husband, who passed away in 2013, raise four daughters.  Above, Mrs. Roemer, right, who is seated with longtime friend Anna Grete Barnum of Cooperstown, is congratulated by Fay Platt of Unadilla and Mrs. Platt’s granddaughter, Jessica Wyman. Entertainment included an appearance by members of the Sweet Adelines’ City of the Hills chorus, and a pitch-perfect rendering of “America” by Luis Rivas, right, of New Lisbon. (Jim Kevlin/AllOTSEGO.com)

By LIBBY CUDMORE • Reprinted from this week’s AllOTSEGO.seniority

ONEONTA – No matter where she goes, Grace Kull brings people together.  “We were the first family in my neighborhood to have a television set in 1950,” she said.  “My husband Al won it in a contest, and when Milton Berle was on, we’d have eight or 10 people over watching the small screen on that big box!”

Recently arrived at the Plains at Parish Homestead, the retired Cooperstown village trustee has made a new home – and a whole new circle of friends.  “I taught a group here to play Kings in the Corner,” she said.  “It’s an old, old card game that I learned from my grandmother.”

“She’s a real mood-booster,” said Plains Executive Director Trudy Claudy.  “She isn’t shy about anything, and she’s a good example for other residents.”