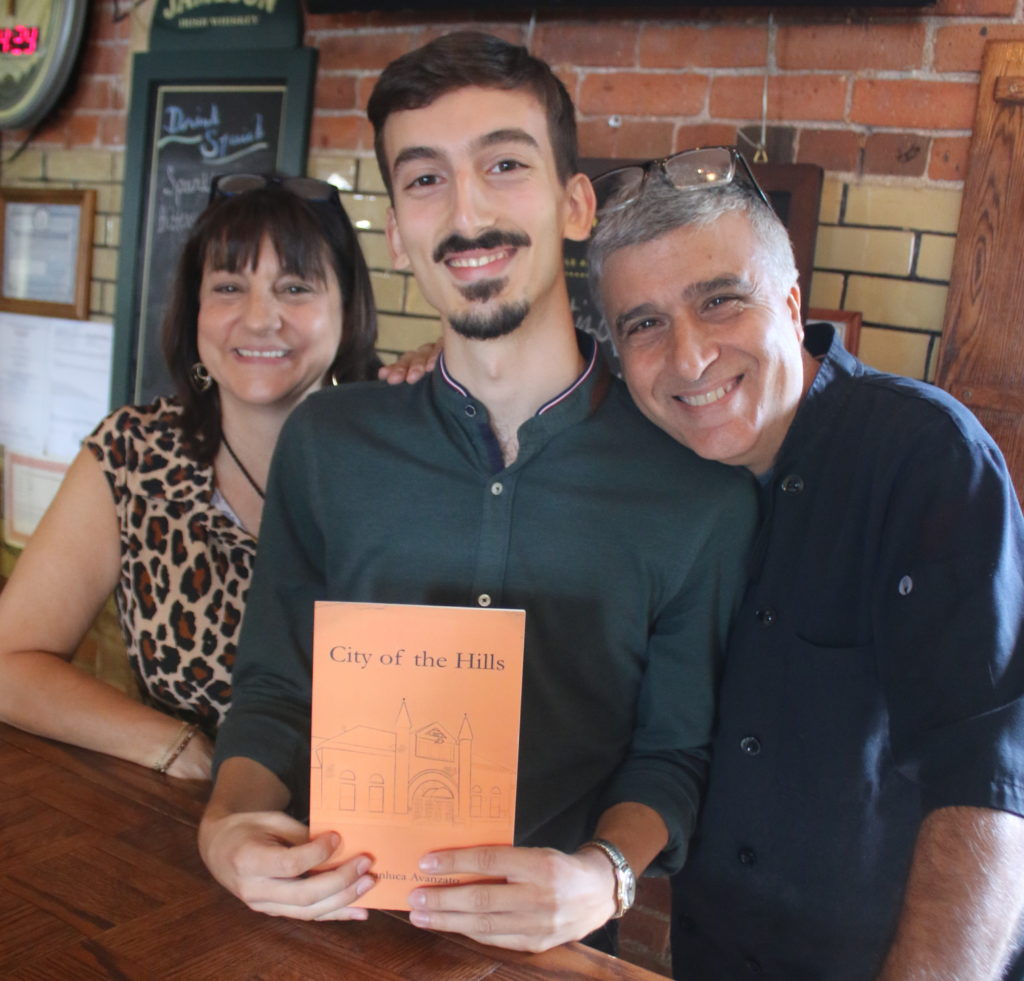 Gianluca Avanzato, with his mother Rosemarie and father Antonio, poses with his new collection of poetry inspired by growing up in Oneonta, aptly titled “City Of The Hills.” Gianluca was on hand at Stella Luna this evening where he read from the collection and signed copies. The book will be available at Greater Oneonta Historical Society, The Green Toad Bookstore and on Amazon.com. (Ian Austin/AllOTSEGO.com)

$3,000 Delivered To Mayor of Amatrice

ONEONTA – Stella Luna’s Bucatini all’Amatriciana may be the ultimate in comfort food.

Tony and Vinne Avanzato began serving the pasta dish, famous in Amatrice, Italy, as a fundraiser after the Aug. 24 earthquake that devastated the town.  “Our friends over there told us there were foundations we could donate to, but they would take 20-30 percent,” said Tony.  “I said, ‘Not gonna happen!’ People are giving their hard-earned money. It should go to the people who need it.”

END_OF_DOCUMENT_TOKEN_TO_BE_REPLACED

Avanzatos’ Stella Luna Not Setting Yet

Avanzatos’ Stella Luna Not Setting Yet

If you leafed through the real estate listings recently, you may have noticed that Oneonta landmark Stella Luna is for sale.

Though the listing just went public, it’s a decision that’s been in discussion since the November 2012 accident that claimed the life of the family matriarch, Giuseppa, and left Vinne with severe injuries. “My life changed that day,” he said. “I’m ready to move on from this.”

The Avanzato family rescued the Market Street train station from demolition in 2000, but their roots in Oneonta go much deeper. “Our parents, Diego and Giuseppa, brought us here from Sicily in 1966, and we had nothing,” he said. “But my father, he had a vision for his family.”

The late Mayor Dick Miller was a fan of the Avanzatos, as well as their cooking, calling the family “the American dream.”
Margaret Drugovich ate her first meal as Hartwick College president there, and in 2013, the brothers were named Hartwick’s Citizens of the Year for their contributions to Hartwick athletics, including helping save Division One soccer.

The brothers also raise money every year to take upwards of 30 disadvantaged children on a shopping trip at Christmas. “I’m not ashamed to say I’m a softie,” he said. “I’m a giver. These kids deserve a nice Christmas like we have.”

And at 59, he’s put 43 years into his cuisine. “The Avanzatos are Oneonta’s history,” he said. “We’ve established a culture here. We believe in giving people good food because we’re proud Italians. We’re sincere.”