Analysis: Another twist in the debate over Obamacare

US lost months making protective gear. Now it's running out.

Coronavirus cases soar by more than 1 million over 5 days

Florida woman gets job washing dishes at nursing home to be close to husband: 'Isolation can kill'

Portland police declare riot during another night of unrest in city

200 YEARS AGO
Music and Dancing are generally taught by masters who profess these arts; concerning which we shall only observe that they are frequently believed to be of too great importance in female education; and on that account that too much time is expended on their acquirement. It is perhaps more desirable, that young ladies should play, sing, and dance, so well as to amuse themselves and their friends, than to practice those arts in so eminent a degree as to astonish the public; because a great apparent attention to trivial accomplishments is liable to give a suspicion, that more valuable acquisitions have been neglected. And, as they are liable to be attended with vanity, and to extinguish the blood of youthful timidity; which is in young ladies the most powerful of their exterior charms.
March 1, 1819

175 YEARS AGO
The City Press seem determined to annihilate the Country Press by offering their weekly papers at the low price of one dollar per annum. This they are able to do with a living profit for the reason that the matter set up for their daily sheet is transferred to their semi-weekly, and then their weekly, without any expense for composition. Added to this, they have printing presses moved by steam, which throw off 2,000 an hour, while the hand press in the country can work only 250 in the same time. Thus, in fact, the only expense to which they are subjected in printing their weeklies, is for paper and ink, and therefore it is that they afford a better profit to the publisher at one dollar than the country sheet receives at $1.50 or even $2. A well-managed paper is of immense importance to a county, in diffusing information of local and other matters among its citizens, besides giving it character abroad, and thus inducing the concentration of capital and industry within its borders. No man can make himself so useful to the masses as a sensible, discreet, industrious editor – and when such a one is found in practice, they should stand by him closer than a brother, from the mere motive of self-interest, distinct from higher considerations.
March 4, 1844

150 YEARS AGO
(Ed. Note: The following was written in expectation that the newly completed railroad line to Cooperstown would bring more people to the village to visit and perhaps to live). Access to the Village of Cooperstown will soon be rendered easier, and then people will be inclined to come here to live if real estate is not too dear, and will come the faster if the attractions are increased. One very desirable thing is a Public Park. Could Judge Cooper have looked ahead 70 years to the wants of this community he would probably have made provision for this object when land about here was cheap. Now it is not so easy of accomplishment.
March 6, 1869

125 YEARS AGO
The funeral services of the late Miss Constance F.
Woolson were conducted in the Chapel of the foreign
cemetery in Rome, Italy by Rev. Dr. Nevin. Among the flowers sent were beautiful tributes from a number of distinguished Americans in Europe. Consul John Worthington commissioned a friend in Rome to lay on her grave a form of sweet violets clustered in laurel, as a tribute from himself and other Cooperstown friends.
The ice now taken from Otsego Lake is about 16 inches thick. The storage house of the milk station has been
filled with it. It required more than 700 tons of ice, or
about 8,000 cakes.
March 1, 1894

100 YEARS AGO
At a congregational meeting of the Presbyterian Church important action was taken looking to extensive alterations and repairs to the church property. Foremost among these, as planned, will be a cloister connecting the church with a Chapel which will add a much-needed classroom for the use of the Sunday School and will link the two buildings together so as to bring them practically under one roof and do away with the necessity of going out of doors in passing from one to the other. The cost of this long-desired improvement will be met by a gift from Mr. James Fenimore Cooper made in memory of his mother, Mrs. Paul Fenimore Cooper, who as Mary Fuller Barrows, united with the church when a young girl.
March 5, 1919

75 YEARS AGO
Pictures loaned by the New York State Historical Association to other museums of fine art include: To the Museum of Modern Art in New York City has been sent a painting of the “Hudson River looking toward the Catskills” painted in 1847 by Asher B. Durand. A view of “Apple Hill” by Samuel F.B. Morse, painter and inventor of telegraphy, has also been sent, and also a canvas describing a scene in one of James Fenimore Cooper’s Leatherstocking Tales” which was painted in 1832 by John Quidor. In March and April, the Lyman Allyn Museum in New London, Connecticut will display the William Dunlap painting of a scene from “The Spy” by James Fenimore Cooper.
March 1, 1944 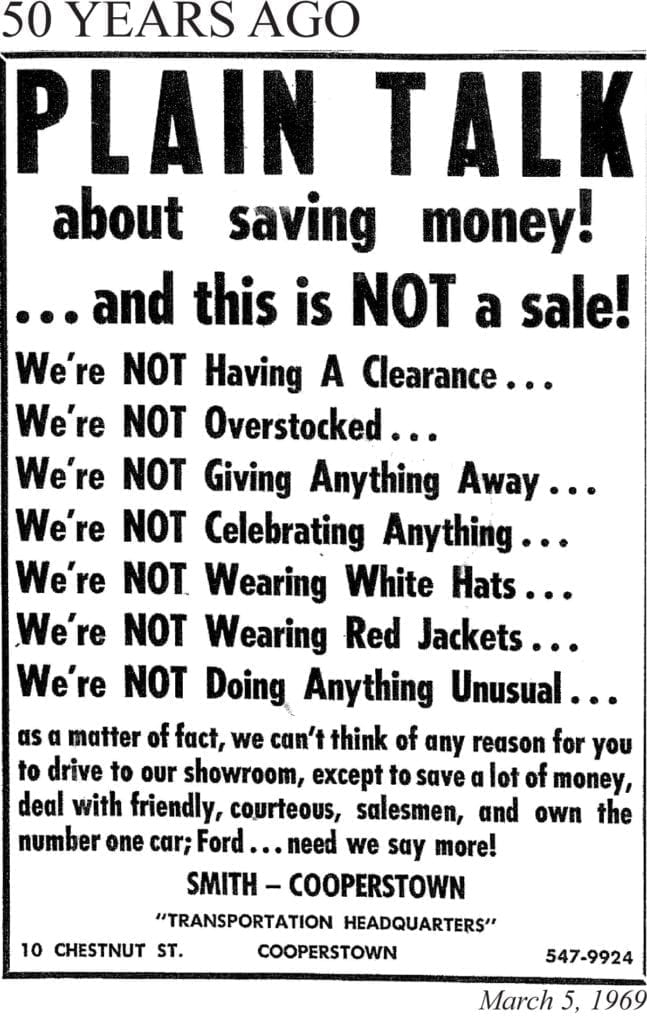 25 YEARS AGO
An unusual number of complaints regarding the failure of village businesses and residents to keep sidewalks clear of snow and ice this winter has prompted Cooperstown officials to re-evaluate snow-removal regulations and procedures. The fine for failure to clear a walk may be hiked from $20 to $50 and property owners who leave shoveling up to the village will be hit with a bill from one of three contractors hired to help keep walkways clean. Cooperstown contracts for snow removal with outside companies because the village street crew can’t keep up with the demand.
March 1, 1994

10 YEARS AGO
U.S. Army Corporal Michael L. Mayne, 21, of Burlington Flats, died in a firefight Monday, February 23rd in Iraq, where he was serving with the 25th Infantry Division. He was the first soldier from Otsego County to die in the Iraq War. Michael was born on October 9, 1987, in Ilion, the son of Lee and Cathy Mayne. After graduation from Edmeston Central School he joined the Army in July 2006.
March 6, 2009