Ommegang brings big shows back to the big lawn 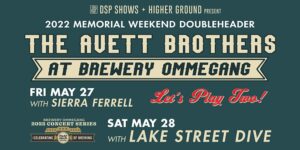 Like every other entertainment venue around the world, Cooperstown’s Ommegang Brewery felt COVID’s hard kick with an all-but cancelled summer concert season in 2020 and 2021. The popular destination spot comes back to life beginning Memorial Day weekend, though, once again welcoming national acts to its big field and Firepit Fridays along the way.

Community and Events Manager Tim Holmes told The Freeman’s Journal / Hometown Oneonta that Ommegang is planning on a busy summer after a “let’s play two!” doubleheader of shows from The Avett Brothers May 27 and 28. Sierra Ferrell opens the May 27 show, popular Boston band Lake Street Dive opens the already sold-out May 28 show.

“We’ll open to 7,500 people for each of those shows,” Mr. Holmes said. “Saturday is sold out and Friday is getting there.”

In a now time-worn pandemic tale, the Memorial Day weekend shows are events rescheduled first from 2020 to 2021, then again from 2021 to 2022. An August 23, 2022 date with Lord Huron at the Brewery falls into that same ‘reschedule’ category.

Rounding out this year’s schedule announced to date are the bands Bleachers on July 29 and The War on Drugs on September 11. Mr. Holmes said they’ll cap ticket sales for each of those shows at 5,000.

“We want to be cognizant of peoples’ comfort levels, parking availability, and safety,” he said, noting Ommegang will have “far more facilities in place” for hand sanitizing and other now-standard necessities. Noting last year’s mid-summer show from Modest Mouse attracted some 5,500 concert-goers, he said, “We still had plenty of space for as much social distancing as people beyond the front of the stage wanted to enjoy.”

“We aim to be cognizant of our place in this community,” he said. “We want to bring in acts and events that support neighboring businesses in the same way they support us.”

He said the four shows to date, sponsored in concert with Dan Smalls Presents, are “not the end of the announcements” for the upcoming summer. He wasn’t able to share details at press time and urged readers to stay up-to-date at the Ommegang website (www.ommegang.com). He said, too, that the brewery is not requiring masks but is, “at this time,” requiring proof of vaccination or negative PCR test for entry to concerts.

“This policy is subject to change,” Mr. Holmes said. “Keep checking the site for details.”

The brewery is also scouting the region for talent for its popular Firepit Friday events that will begin in early June.

“We kept Firepit Fridays going as much as we could throughout the pandemic,” he said. “It’s a great way for people who want to ease back into outdoor events. It’s not a ton of people, it’s outdoors, and it’s a great opportunity to see local bands.”

“Firepit Friday is a good chance for us to engage with local residents,” he said. “Visitors are leaving on Friday and the new visitors come in on Saturdays, so it’s a time to take a quick breather.”

Mr. Holmes said the brewery is encouraged by a strong turnout at a job fair they held last week, hoping, like all area restaurants and attractions, to offer a full complement of staff to serve visitors as they head out for summer travel.

“We’re hopeful like everyone else that things are getting back to normal,” he said. “We’re planning on a great summer.”