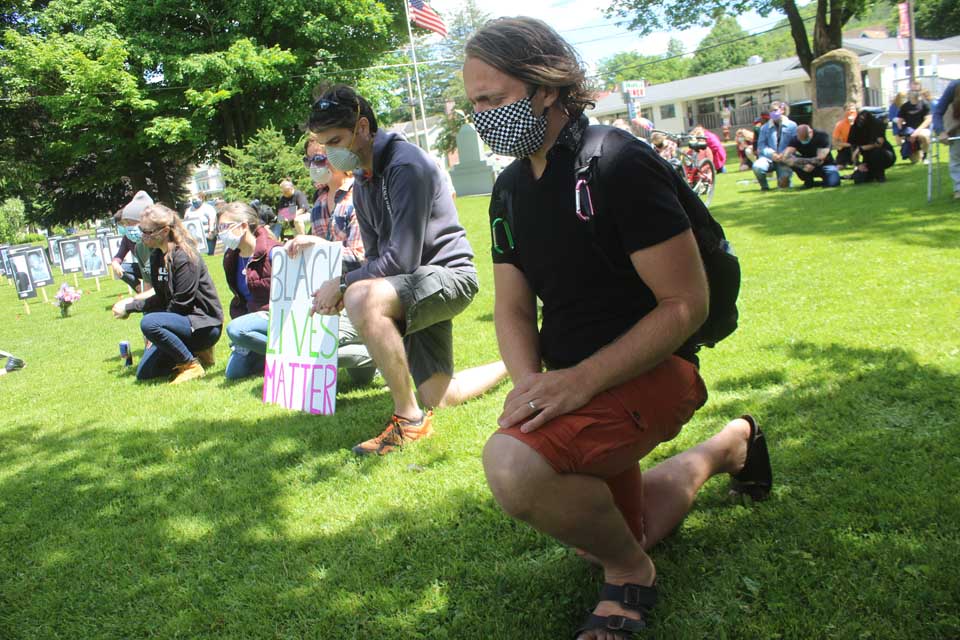 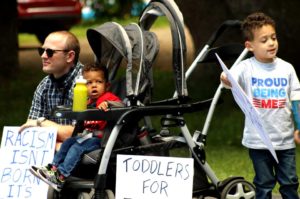 Michael Frye-Hunt, Unadilla, above, takes the knee for 9 minutes – the length of the video recording George Floyd’s death in Minneapolis – during a “Rally for Justice” this afternoon at Unadilla Village Hall; 125 other attendees joined him in the third such rally in Otsego

County, organized by Taylor Reed, left, a local resident.  The first was two Sundays ago in Oneonta; the second last Sunday in Cooperstown.  Speakers today included Shannon Hughes, Oneonta Human Rights Commission chairman, and the Rev. LaDana Clark, who have spoken at previous local rallies.  They were joined by Meer Singh, 13, an Oneonta student, who said, “The whole county is systematically racist and corrupt.” Taury Seward, Binghamton, a comic by profession, declared, “This thing has opened up and revealed all these things we need to see.”  Erin Insinga,  director of the Delaware County Animal Shelter,  said of Floyd, “He was a man.  He was a human.  He was a son.  He was a father.”  She also asked her daughter, Arianna, who is biracial, to the mike.   Dwight Mott, who ran a local coffee shop, told of travails faced by his son, an adopted Rwandan refugee.  Inset right, Chris Doyle of Sidney and wife Telorea brought their “Toddlers for Equality,” Derek, 18 months, and Christopher Jr., 4, to the event.  According to its Facebook page, a rally planned in Richfield Springs tomorrow (Sunday) has been cancelled. (Jim Kevlin/AllOTSEGO.com)

For More Details, Pick Up Next Week’s