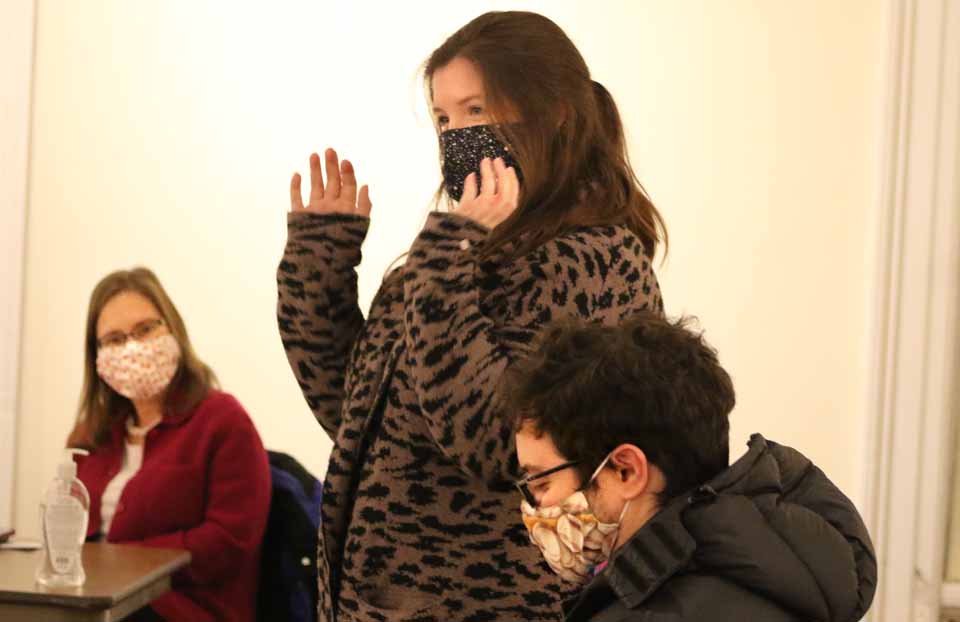 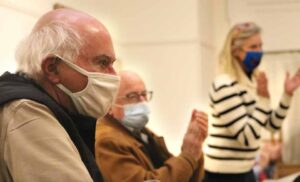 “I very excited,” Hanna Bergene, 29, above, said a few minutes ago as the Village Democratic Party caucused in the 22 Main ballroom and nominated her for one of two positions on the Cooperstown Village Board in the March elections.  Also nominated for another term was Deputy Mayor Cindy Falk, at left.  In the foreground is Henry Bauer, who nominated Bergene.   The new candidate, now social media manager at PaperKite Creative, had worked several years at the Cooperstown Chamber of Commerce. Inset left, Trustee James Dean, who is retiring April 1 after a decade on the board, accepts an energetic round of applause after Mayor Ellen Tillapaugh Kuch, right, praisefully reviewed his tenure.   At center in Trustee Joe Membrino.  Henry Bauer’s brother, Ben, was also introduced this evening as the newest member of the Village Democratic Committee, signaling, together with Bergene, the arrival of a youthful wave in local Democratic politics.  It appears the Republican Village Committee isn’t fielding a slate this election so, absent an independent candidate surfacing, Bergene and Falk appeared headed for election.  (Jim Kevlin/AllOTSEGO.com)

One thought on “Bergene On Ticket For Village Board”