This Day in History: May 11

Compiled by Tom Heitz and Sharon Stuart, with resources courtesy

200 YEARS AGO
Information Wanted. In the year 1814, a young man of the name of Carlos L. Mallory, a native of Woodbury, Litchfield County, Connecticut, and then resident with David Woodward, of that place, as an apprentice to the tanning and currying and shoemaking business, left his home, and has never been heard of by his friends since that period. He is now, if living, 24 years of age, about six feet high, black eyes, and of a dark complexion. The object of this notice is to obtain information of his present situation. Any person, therefore, who can communicate anything relative to the fate of this young man, will do an act of humanity, which will be remembered with lasting gratitude by his afflicted parents and relatives, by addressing letters to Mr. Nathaniel Mallory, Newton in Fairfield County, Connecticut. January 1, 1819. Printers in the United States will sub-serve the interest of society, by giving the above one or two insertions.
January 18, 1819

175 YEARS AGO
Found Dead – A man named John B. Taylor was found dead by the side of the road near Rochester, N.Y. week before last. By his side was found a gallon of whiskey, in his pockets a pound of tobacco, a quarter pound of tea, a pack of cards enveloped in a copy of the Declaration of Independence, one cent, a jack-knife and an empty wallet.
Another – Simeon Raymond, a man of intemperate habits, was found dead in a boat near Norfolk, Connecticut last Sunday. A bottle, his usual companion, was found by his side. It is supposed that he fell into the position in which he was found, and being intoxicated was unable to recover himself.
January 16, 1844

150 YEARS AGO
Excerpts from The Freeman’s Journal’s commentary on the election of President Grant: Seymour: 2,643,635. Grant: 2,978,503 “In a total of 5,622,138 votes it will be seen that Grant’s majority over Seymour is but 334,868. How even that meagre result was obtained will appear by a glance at Tennessee and Missouri, where white men were disenfranchised by wholesale, and a look at the reconstructed States where the Grant vote is so largely made up by ignorant Negroes who were but yesterday in all the barbarism of slavery. Had not three states been excluded from a participation in the election, would Grant have had a majority on the popular vote? He obtained a majority through a Radical fraud on the constitution.
January 15, 1869

125 YEARS AGO
Local – M. Ernest Lippitt has entered the employ of C.R. Burch, and will learn the jeweler’s trade – a good thing for any boy to do – the learning of a trade.
There have been very few cases of grip (influenza) among the several hundred children in attendance at Cooperstown Union School.
There are now nearly a score of prisoners in the Otsego County jail, a number of them tramps – pity that they could not be set to work at something useful.
We regret to say that our Mr. L.K. Williams has been confined to his house for the past week by a serious attack of influenza and general weakness.
January 18, 1894

100 YEARS AGO
The wave of disease which recently passed over the earth has left in its wake a number of dead estimated as at least equal to that caused by four years of war in the armies of the allies. In New York State, in the month of October alone approximately 32,000 lives were lost, while in the country as a whole 400,000 people are believed to have died of so-called influenza during the months of September, October and November. It is questionable if any recorded epidemic has produced in a like space of time such disastrous results. Yet, despite the efforts of an army of research workers, both here and abroad, the definite causative agent of the disease remains today unknown. There is now fairly general agreement among investigators of epidemic influenza that the disease is spread by personal contact from one individual to another.
January 15, 1919 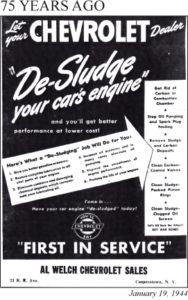 50 YEARS AGO
Dr. Paul Z. DuBois, librarian for the New York State Historical Association, spoke to members of the Cooperstown Rotary Club on Tuesday, January 14 at the Hotel Otesaga. Dr. DuBois discussed the new library building of the Association and the services it offers to students in the Cooperstown Graduate programs, to members of the local community, and to the general public. He pointed out that the new library came about as a result of the expanding educational program of the Association, and because of the crowded conditions that prevailed in the former location of the library in Fenimore House. He noted that each student in the graduate programs is required to write a thesis. The research is carried on in the library and copies of each thesis are deposited there.
January 15, 1969

10 YEARS AGO
A novel master’s of science degree in lake management – the first of its kind in the nation – may be in place at the SUNY Biological Field Station in Cooperstown and at Thayer’s Farm as soon as September 2010. Field Station Director Bill Harman, who began developing the idea two years ago, said it has gone through several levels of SUNY approval and “there’s a very good chance” the program will receive the final OK soon. “There are a lot of people who are out there managing lakes who don’t even call themselves lake managers,” Harman said. “We saw a niche we could fill,” said Harman, who as field station director is also a member of the SUNY Oneonta biology faculty. Under the final plan Harman would be teaching two classes, one in lake management and the other in the management of “aquatic biota.”
January 16, 2009