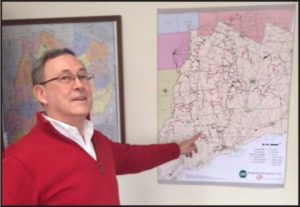 HARTWICK – Finally, more broadband is coming to Otsego County.
This March, Otsego Electric Cooperative’s plans to bring the high-powered Internet to most of the western part of the county will begin with fiber broadband access in Laurens.
“Be patient, we’re coming,” said Tim Johnson, CEO, Otsego Electric Cooperative. “We’re making rapid progress and we’ll get there.”
Separately, by fall the Otsego Now hopes to launch its downtown Cooperstown WiFi Hotspot project through MIDTEL, Middleburgh Telephone Co.
These projects are smaller parts of the initiative begun in 2016. The larger broadband initiative was designed by FARR Technologies for the entire county; however, that was stalled in part by the Spectrum/Time Warner merger.
Meanwhile, Hartwick-based Otsego Electric stepped in, and plans to bring over 500 miles of fiber cable to its service area, from Unadilla up the Butternuts Valley to Richfield.
Residential speeds will start at 100 megabits at $49.95 a month or 1 gigabit at $79.95 a month.
In an interview Monday, Feb. 11, Johnson said he’s confident “knowledgable workers, remote employees, and telemedicine” will be well-served at those speeds. Cell phones will connect via a special modem that comes at no extra charge and will likely work better than current service through cell towers.
Slow digital connectivity is common in rural areas, due to low population density that are more expensive to serve than more populated areas. Otsego Electric averages 4-5 members per mile; NYSEG has at least twice that.
“We are very rural and our membership is underserved or un-served,” said Johnson. “When we started this endeavor members were struggling with terrible DSL or satellite connections. Satellite connections are affected by capacity limits, weather, and speed.”
He continued, “When I came here in 2016, my first job was to investigate pursuing the New York State Broadband Initiative. We were awarded $4 million in the second phase of the initiative to build 260 miles of fiber. This has become the backbone of the network.”
The grants don’t pay for the entire project. The cooperative has to shoulder 20 to 30 percent of the cost and the grants come from a combination of state and federal sources.
“More miles are coming. In 2017 we were awarded $10 million total for the next phase. That will pay for another 270 miles of fiber. That will get us to about 550 miles and we hope to be able to build out to all of our members.”
The second local broadband initiative, Cooperstown’s downtown WiFi Hotspot project has been in the works for several years.
“We are in process of finalizing contracts with the New York State Dormitory Authority to help pay for a WiFi Hotspot set up in the commercial area of the commercial district in Cooperstown,” said Jody Zakrevsky, Otsego Now CEO. “The IDA is to receive $250,000 from Dorms and the Village receive 57k from the Empire State Development fund.”
Installation of the high-speed WiFi project will be started this summer in Cooperstown. Approximately 15 to 20 access points, or antenna boxes, will be placed throughout the downtown area and commercial district.
Coverage will be on all of Main Street up to Fair Street and on Chestnut Street up to the Chamber of Commerce building. The coverage will also go West almost to the County building on Upper Main Street.
At any one time, approximately 5,000 individuals will be able to use the system via their cell phones or tablets and laptops.
There will be three tiers, Becker explained. An hour of low-speed access will be free, for someone who might just want to check email or read a menu. Another option is high-speed with no time limits, available for a monthly fee, or a “tourist option,” where access can be purchased for a few days at a time.
The project will be constructed by MidTel Communications in Middleburgh. Jim Becker, President of MidTel said that “We are very familiar with the Village because we have been providing the broadband and wireless services to the Hall of Fame for Induction Weekend.”

One thought on “Broadband Breakthrough Due For Otsego Electric Customers”