Can He Raise Enough?

By JIM KEVLIN • Special to www.ALLOTSEGO.com

ONEONTA – After 36 years in the New York State National Guard, retiring Feb. 2 at adjutant general, the top commander, Tony German’s career was guided by a set of values:  Integrity first, service before self, and excellence in all we do.

That’s the code of the U.S. Air Force, he explained.

“I’m not going to change now,” he said Sunday, Aug. 18, in an interview at his Cemetery Hill home as he contemplates his latest challenge:  Running for the Republican nomination for 19th District congressman.  If he faces a GOP primary and wins next June, he’ll face the Democratic freshman, U.S. Rep. Antonio Delgado on Nov. 3, 2010.

For now, Delgado, who has only been in office 10 months, is staying out of the fray.  A statement from his office said he will continue to focus on “health care costs, expand rural broadband and support family farmers and veterans … (He) will continue to serve with accessibility, accountability and transparency.”

For German, as in any military assignments, the outcome is not assured.

On deciding to run for Congress, he contacted the Republican chairmen in the 11-county 19th District. “They were very excited about my bio,” said German.  That was the upside.  The downside is “nobody knows me.” 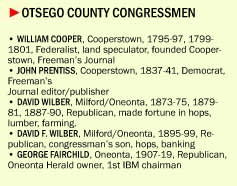 He met with the two most recent Republican incumbents:  Chris Gibson, an Army colonel who served Otsego County in Congress from 2011 to 2017, and John Faso, former state Senate minority leader and 2006 gubernatorial candidate (against Democrat Eliot Spitzer), who lost to Delgado last November after a single term.

Both were encouraging, he said.  Gibson told him, “Read my book.”  Published in October 2017, “Rally Point” is subtitled: “Five Tasks to Unite the Country and Revitalize the American Dream.”

Gibson also connected German with his former campaign manager and webmaster, who have joined the fledgling campaign.

Before he can expect them to declare they’re backing him, “I’ve got to prove I can get support.”  And that, said German, means monetary support.  Last year, Faso raised $4.6 million in his reelection campaign; Delgado raised $9 million.

For that reason, German filed his papers with the state Board of Elections Wednesday, Aug. 14, 14 months before Election Day.  He’s got to get started.

Already, Michael Roth, a Woodstock contractor, and Ola Hawatmeh, a fashion designer in St. Louis who recently moved back to her native Poughkeepsie.  At this time in the last election cycle, six Democrats, including Delgado, had surfaced to challenge Faso.

The candidate is also aware that Marc Molinaro, who ran for governor last year and is now seeking reelection as Dutchess county executive, is also considering a challenge to Delgado.

The candidate, a youthful and energy-filled 60, was born in Germany, where his father was stationed in the Army, grew up in Roxbury, Delaware County.  An avid soccer player, he was recruited to MacMurray College in Illinois but, homesick for the Catskills, soon returned to SUNY Cobleskill, where he obtained an associate degree in accounting in 1979.

He hopped on his bicycle, planning to cycle cross-country, but ran out of money in Green Bay, Wisc.  Back home he prevailed upon an uncle to give him a place to live and a job – digging ditches.  Providentially, the first ditch he dug was in front of the home of his future wife, Diana.

He went on to a bachelor’s in business at SUNY Oneonta in 1981, and joined Dale Gardiner’s Oneonta accounting firm.  But interested in becoming a pilot, he joined the Air Force as a navigator and spent the next six years in active duty, mostly in North Carolina.  “We need accountants,” he would later explain, “but the Air Force was a lot more fun.”

Leaving active duty in 1987, he shifted from the regular Air Force to the state’s Air National Guard 139th Tactical Airlift Squadron at Stratton ANGB, outside Schenectady, and his career took off, with his National Guard biography showing promotions every year or two to commander, 109th Airlift Wing, by 2006.

By 2010, he was brigadier general and New York ANG chief of staff.  In 2015, he was a major general in charge of the state’s Air National Guard.  A year later Governor Cuomo appointed him adjutant general, the state’s top military office.

Along the way, he underwent training at the Naval War College, MIT and Harvard, much of it in leadership skills.

His biggest political challenge came in 2013, when the National Defense Authorization Act cut all the ANG’s C-130s, which would have ended the collaboration with the National Science Foundation’s Antarctica Program, survey flights into the Arctic, and search-and-rescue missions off Long Island.

As ANG executive officer, he reached out to the state Congressional delegation, including Senate Minority Leader Chuck Schumer, and succeeded in stemming the cuts. The Niagara Falls unit alone would have been cut from 1,000 airmen to zero, with a $100 million impact on the community.  “It would have been a big hit for New York State,” German said.

He served under six presidents, starting with “the Reagan buildup,” then Bush I, Clinton, Bush II, Obama and Trump.  As policy shifted, there was one given:  “People are the same,” he said.

As his responsibilities grew in Albany, the German family moved to Schoharie to be closer to Stratton ANGB, but moved back to Oneonta a dozen years ago.  In an open shirt, shorts and sandals, a relaxed German was interviewed at the ranch home he and Diana built in the hills outside Oneonta a decade ago.

The couple’s youngest child, Becca, 21, graduated from SUNY Oneonta this past May, is planning to marry, and the young couple aim to spend a year in New Zealand.

The couple’s three sons, Josh, now 32, Ben, 29, and Zach, 24, all followed their father into the Armed Service.  They have two grandchildren.

Retiring Feb. 2 was one thing.  Winding down was another.  “You have to be de-programmed from being at the edge of your seat all the time,” he said.  His official and personal phones had the same ring; Diana changed the remaining phone to a more soothing tone, so her husband wouldn’t jump each time it went off.

With time on his hands, he plugged into the national political conservation.  “It just became very clear to me there has to be a different way,” he said.

For now, he expects his campaign to focus on three issues:

One, health care.  “Everyone can agree we need health care, and it needs to be affordable,” he said. “Republican, Democrat, independent – we’ve all failed.  (But), it’s an issue that can be solved.”

Two, border security, immigration, but it’s also drug smuggling, sex trafficking and more, he said. “People have to come here legally,” he said, and it’s not a challenge that can’t be met.  “I’ve been to all seven continents, 60 countries.  Every one we went to, we entered legally.”

Three, small business.  He’s watched the decline of Upstate communities as local businesses closed down.  “We have to do things to enable businesses to continue,” he said.