Burnett: Fauci opens his mouth with facts, Trump does not

'Glee' actress Naya Rivera 'mustered enough energy' to rescue her son 'but not enough to save herself,' authorities say

US Air Force F-16 at New Mexico base, pilot injured

Tom Bergeron, Erin Andrews will not return to 'Dancing with the Stars'

Compiled by Tom Heitz and Sharon Stuart, with resources courtesy

150 Years Ago
On Tuesday, January 12, 1869, the great event transpired for which the people have been waiting many years. Five trains full of people were gathered between Albany and Binghamton, the last on reaching its destination at 5:30 p.m. The banquet in honor of the occasion was held at Fireman’s Hall in that live young city, and did not close its festivities until a late hour. Hon. R. Balcom of Binghamton presided and introduced the several speakers, beginning very properly after a brief welcome to Binghamton by G. Bartlett, Esq., with that of Hon. J.H. Ramsey, the President and Hero of the road. Mr. Bartlett gave the following sentiment: “The Albany and Susquehanna Railroad – May the untiring energy and perseverance which brought it into existence continue to control, guide and shape its future destiny.” President Ramsey responded following a loud and persistent outburst of applause. He said: “I am not unmindful of the honor conferred upon me. But I am conscious that that honor should fairly belong to many men other than the humble individual who now addresses you. It is a subject of great rejoicing to all the people along the line of the road that an important line of communication and traffic has been opened, and that they will enjoy its benefits.”
January 1869

125 Years Ago
The Library – Friday evening the Board of Directors and the Trustees of the Oneonta Public Library met with Professor Bull at the Union School building and divided the books, of which there were above 8,000, between the school and the public library, in accordance with the library law. The school retains most of the books of reference, including two of the cyclopedias. The public library takes all the works adapted for general circulation.
January 1894

100 Years Ago
The legislatures of 35 states, one less than the required three-fourths, have ratified the prohibition constitutional amendment. Several state assemblies now in session are expected to take action tomorrow with a probable race between Nebraska, Missouri and Minnesota as to which will be next on the list. The amendment, under its provisions, becomes effective one year from the final date of its final ratification.
“Bootlegging,” in popular parlance is the charge made against Frank Murphy and Mike Nugent who were arrested Tuesday by Chief Blizard and Officer Fred H. Horton and arraigned during the afternoon before Judge Shove. Both were held for action by the Grand Jury and were able to furnish the $100 bail suggested by Attorney E.G. Holmes. Murphy, who is charged with selling a pint of whiskey to John Reynolds and receiving therefore $2 late in December, seemed to look upon his arrest more as a joke than as a serious matter. He jocularly said to the judge that he found trouble enough getting a drink for himself when he wanted it without trying to furnish it to others. Nugent is a young man of 20 years. He is charged with presenting a quart bottle of whiskey to one Edick. These are the first arrests in Oneonta since the city became dry on October 1 last year.
January 1919 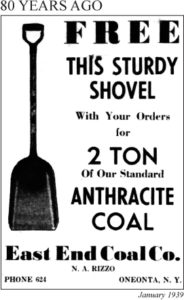 60 Years Ago
Oneonta will have skiing this winter starting not later than next Saturday. It will be free, open to the public, and in operation from 1 p.m. to 5 p.m. Saturdays and Sundays. An instructor and supervisor will be on hand and lessons may be arranged for Saturday forenoons, possibly during the week. A tow and two 600-foot slopes plus a toboggan slide are being prepared on land owned by the Oneonta Board of Education back of the old filtration plant.
January 1959

40 Years Ago
Rush hour drivers on Interstate 88 came to the rescue early Thursday morning when a Sidney Center woman lost control of her car on a patch of ice and skidded into the Susquehanna River landing upside down in the water with only a rear axle exposed. Eleanor Boyd, 44, listed in critical condition in the Fox Hospital Intensive Care Unit, was alone in the vehicle. The accident occurred at 7:50 a.m. north of the Route 205 interchange. Mrs. Boyd was on her way to her first day of work at Oneonta State was headed east. Her car skidded into the river at a point where there are no guardrails. Dr. John Leahy, a West Oneonta veterinarian and Oneonta School Board member used his car phone to call for help. Another passer-by provided a chain which was hooked to the bottom of the car. A gathering of at least 40 men helped to right the car, pull it to shore and partly out of the water. The task was hampered by cold and wind and took about 15 minutes, Dr. Leahy said. Off-duty fireman Donald Payne crawled into the car to lift out the unconscious Mrs. Boyd who was caught under the dashboard. Cardio pulmonary resuscitation was administered before she was removed to the hospital.
January 1979

20 Years Ago
The new president of the local branch of the National Association for the Advancement of Colored Persons (NAACP) called for a healing of past racial incidents in the community at a celebration Sunday in honor of a fallen civil rights leader. Nanci St. Clare, the new president of the Oneonta Chapter of the NAACP, took an oath to do her best to improve the social, economic and educational areas of life in the community, during a Birthday Memorial Celebration of Martin Luther King, Jr. in the Great Hall of the St. James Episcopal Church. In an address to the 60 people attending the luncheon, St. Clare called for a “healing in the community.” The chapter’s number one goal for 1999 is an educational outreach in local schools.
January 1999

10 Years Ago
Employers announced a total of nearly 40,000 job cuts Friday, almost all of them related to problems in other parts of the economy. Circuit City Stores, Inc., said it is liquidating and closing all of its stores and cutting 30,000 jobs, partly as a result of the decline in consumer spending. Rental car company Hertz Global Holdings, Inc., is eliminating 4,000 jobs worldwide as families and business travelers forego trips. Insurer WellPoint Inc. is cutting about 1,500 jobs with rising unemployment leads to fewer people with health insurance.
January 2009