150 Years Ago
Oneonta – Calvin Short has sold his farm of 100 acres to Thomas Burnside of Otego for $3,100. It will be occupied by his son Sylvester Burnside.
Scramling & Michael have opened a real estate agency in connection with their law business over the store of Cope & Co.
The boot and shoe firm of Pardee and Coats may be found at their new store on Main Street where everybody can be shod on very reasonable terms.
An elegant fine-toned bell for the new M.E. Church arrived last week from Troy, and will soon be in position to send its music over the hills and along the valleys.
The coal trains passing up the valley are increasingly large, and yet the trade is only beginning. From January 18 to January 30 Bissell & Yager sold at their office 197 tons of coal.
February 1869

125 Years Ago
At five o’clock on Thursday afternoon the State Normal School building in Oneonta stood in all its massive proportions, the scholastic home of over six hundred pupils, the pride and hope of the town, the glory of its friends and of the friends of education in all this section. At half past six o’clock flames wrapped the noble structure from basement to peak, and in glowing colors heralded the story of its doom upon the cloud-hung sky. At eight o’clock empty walls and swiftly dying embers, and open windows peering out like sightless eyes of the dead, were all that were left. Such in brief is the day’s tragic history of a building whose foundations “were laid in honor and good faith,” which has had a brief but noble history, and which now meets its first great reverse.
February 1894 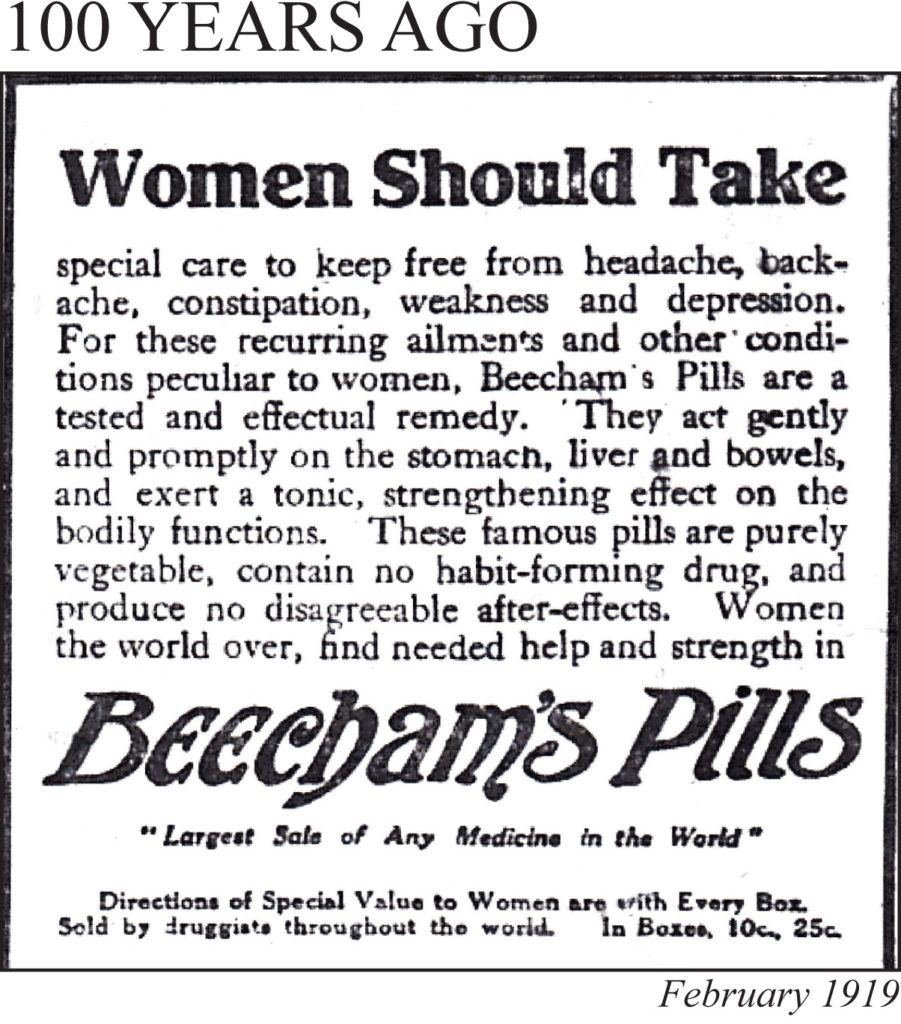 80 Years Ago
The victim of a sudden rise in flood waters in the Charlotte Creek at Davenport Center, Patsy, a ten months old white Collie, was rescued by two men in a rowboat last night after she had been marooned on a bit of high ground in the midst of the swollen torrent for more than two days. Two previous attempts to save her had failed. Spontaneous cheers arose from dozens of onlookers who lined the adjacent highway as Patsy joyfully greeted her rescuers with tail wagging and high-pitched barks before stepping daintily into the frail craft as they held it at a precarious angle in the dangerously swift current. Automobile horns added to the din as the rowboat started on its round-about way back to dry land and safety.
February 1939

60 Years Ago
A Lovelier You by Sue Miller – Spring Reducing Series: “During the spring and summer, skirt lengths will remain the same. And let that be a word of warning to the damsel who could do with a slimmer leg-line! To get it, start with these calf-trimming routines: Without your shoes stand erect. To a slow count of five come up on the, and balls of the feet and then quickly let the heels down to the floor – but not so quickly as to jar the body. Repeat ten to twenty times. 2. Down on the floor, lie on your back. Raise the legs straight up in the air and cross them at the calves. Now, repeatedly crisscross the legs so that the back of one is “massaged” by the front of the other. Repeat twenty times. 3. And be sure the heels of your shoes fit snugly. Slipping heels cause the calves to work overtime. To compensate, the muscles grow sinewy and form a bulge equal to that from excess flesh. Both problems can be corrected by these routines – if you stick with them!
February 1959

40 Years Ago
Hartwick College officials have found cause for optimism in increased student applications, annual fund giving, and other statistics that point to greater financial stability and growth next year. The optimism is infectious according to college spokesman James Parsons, it has led to increased student activity on-campus as well. Applications for admission are up 65 percent above last year. The attrition rate – the proportion of students who leave without finishing four years – is down 33 percent and annual fund giving is 150 percent higher than this time last year, college officials said. Although it took a tuition increase, Hartwick College Financial Vice-President Walter Kuhn predicted next year’s budget would be balanced after four years of deficits. With stronger admissions the outlook for financial stability is improved for next year, with 1,000 students the total capacity.
February 1979

20 Years Ago
A 21-year-old Oneonta man was arrested Thursday in connection with a fight last December involving students at State University College Oneonta, city police reported. Police charged Keith J. Hart with first-degree riot, a felony, and fourth-degree criminal mischief. He was arrested about 2:30 a.m. and released on $150 bail.
Police said Hart was the instigator of a fight about 3:15 a.m. on December 12 at 140 Main Street that involved many people and resulted in a SUNY student’s admission to Fox Hospital with an eye injury. Of two other SUNY students charged in December with riot, one was also charged with felony assault. Officers at the scene reported that a door at the Main Street building was broken and several holes were punched into the wall.
February 1999

10 Years Ago
Basketballs were held silent and lights dimmed Saturday for the dedication of Lambros Arena at Hartwick College on Saturday. About 1,000 athletes and spectators, including alumni, attended the event in the 1,100-seat gymnasium in the Binder Physical Education Center. Tarps at either end of the gym fell to reveal large blue letters spelling “Lambros Arena.” “Am I ever proud,” veteran coach Nick Lambros told the crowd. “This is an unbelievable – an unbelievable – day for me.”
The dedication came during halftime of the men’s basketball game against Stevens’ Institute of Technology. The Hartwick Hawks went on to defeat the Stevens Ducks 67-60. College President Margaret L. Drugovich asked audience members to stand during the ceremony. Several of Lambros’s contemporaries spoke. Richard “Doc” Sauers, a former head coach at the Univdrsity of Albany who competed against Lambros for 20 years said “He’s a people person. All his players loved him.”
February 2009