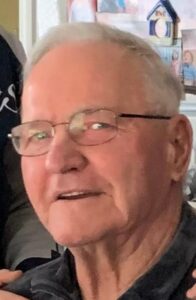 Keith Floyd Mayne, 83, of Burlington Flats, passed away peacefully on Sunday June 13, 2021 at his home surrounded by his family.

Keith was born on February 22, 1938 in New Berlin the son of the late Floyd and Mildred Wightman Mayne. In addition to his parents, he was pre deceased by sister Lillian Hotaling, sister in law Marjorie Tauss, and a brother in law Gordon Wheelock.

Keith was a graduate of West Winfield Central School. He married Marilyn Wheelock on September 29, 1956, and two years later, they moved to their Burlington Flats farm, which they operated until their retirement in 1998.

In his high school days, Keith active in sports, lettering in four sports over three years. Following graduation, he continued participating on Town Team basketball and softball leagues with the local men.

During his farming years, Keith was active in Eastern Milk Producers and the County ASCS Committee. He was dedicated to his community serving the Town of Burlington as the Assessor, Town Supervisor, and a Town Board Member for a total of 34 years.

Keith could be found busy in his garage repairing almost anything. He was especially happy working with his sons on their racecar and attending the races. He always enjoyed going to his children’s and grand children’s school activities. Proud of his family, he loved, cared, and nurtured them throughout his life. He was grateful for the joy they provided him.

Calling hours will be Tuesday June 15, 2021 from 6:00 PM to 8:00 PM at Delker and Terry Funeral Home 30 South Street Edmeston, NY. Additional calling hours will be Wednesday June 16, 2021 from 1:00 PM to 2:00 PM at the Burlington Flats Baptist Church, Arnold Road Burlington Flats with Pastor Jay Henderson officiating. Funeral services will immediately follow at 2:00 PM at the church. Interment will follow in Burlington Flats Cemetery. Donation may be made to the Edmeston Fire Department or The Edmeston Free Library in memory of Keith. Envelopes will be available at the funeral home and church. To send condolences visit www.Delkerterryfh.com or Delker and Terry Funeral Home on Facebook.