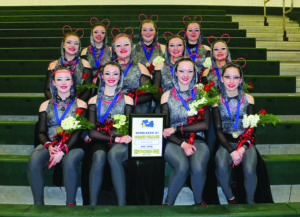 The Jaguars’ SA-1 Winter Guard capped its October-to-April season with the April 2 championship, adding another honor to the school’s 50-year-plus legacy of color guard excellence.

“Ours is one of the oldest Guards in New York State,” co-director Jennifer Sander told The Freeman’s Journal / Hometown Oneonta; she and Carol Louden are co-directors of the squad. “The senior guard put in two-and-a-half to three hours of practice three days a week. It’s a lifestyle for them and for all of us who are involved.”

Her team, she said, couldn’t wait to get back on the floor after a two-year COVID-induced hiatus. But when the season began, they were ready to go and eager to make the jump from the SA-2 class, for smaller schools, to Senior Guard SA-1.

“For my daughter and the other girls in SA-1, Color Guard is their life,” Ms. Sanders said. “Coming back after COVID I think they were worried they might be out of practice. People don’t realize how much goes into it, the endurance, the strength, the precision. To do a show as intense as we did is pretty amazing and we couldn’t be more proud.”

“We’re a school of less than 300,” Ms. Sanders said. “We’re competing against guards from schools like Shenendahowa (in Clifton Park) with six times the students. We put out three different guards every year and the girls love it.” 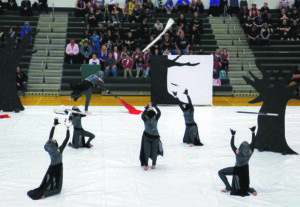 Along with the champion SA-1 guard, featuring students from grades six through 12, Laurens offers youth and cadet levels that attract younger students ready to join in the excitement and pageantry. The school this year welcomed Winter Guard members from nearby schools in Oneonta and Franklin, with one home-schooled student and one whose family drives from Elmira to participate in this top-rated team.

In the Mid York championship, judges scored Laurens and its competitors on timing – getting on and off the floor, that is – general effect, level of skill with throws and catches, handling of rifles for clean throws and catches, and artistic concept. Ms. Sanders said Winter Guard performances are “more artistic” than traditional outdoor Color Guard marches and competitions.

“It’s a show with a concept,” she said of the April 2 competition. “Our SA-1 Guard used the Rolling Stones’s “Paint It, Black,” for their work, the Junior Guard used Dolly Parton ‘9-to-5,’ and the young group did their routine to ‘Boot Scootin’ Boogie.’”

The village’s fire trucks escorted the team bus back into Laurens late on April 2 to congratulate their championship showing.

“It was midnight so they didn’t run the sirens, of course,” Ms. Sanders said. “It was great to get that kind of a welcome. All the girls were so happy about it!”

“We go all year,” she said. “It’s amazing what these girls push through with school and COVID and everything going on, but for them and for all of us it’s a labor of love. We do the Sherburne Festival and the summer parades, we do a summer clinic for girls who want to get involved.”

For more information on the Laurens Jaguars, visit www.laurenscs.org.

One thought on “Laurens Color Guards are the champs”