Volunteers collect over 100 bags of trash at lake

Exploring an abandoned 100-yo Masonic Temple

Car meet up raises money for good cause

More than 40 vehicles pulled from waters

Why the Buccaneers' Super Bowl LV appearance will be historic 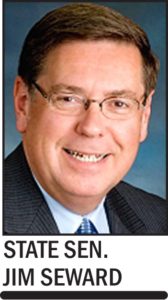 President Trump and Governor Cuomo were recently in a war of words again – certainly not breaking news. This time around, the back and forth centers on the Upstate economy, with President Trump advising Upstate residents to move out.
The president’s actual words to people who feel things aren’t going their way, “If New York isn’t gonna treat them better, I would recommend they go to another state where they can get a great job.”
I appreciate what the president is saying, and I have already pointed out on a number of occasions that we are
losing population due to an absence of economic opportunities and our high cost of living.
However, rather than push more people out the door, I want to reinvigorate New York, give people a reason to stay, and entice others to come back home.
As the ranking Republican on the Senate Finance Committee, I have been front and center during state budget hearings that are just about to conclude. When all is said and done, the hearings
will have encompassed 13 days and countless hours drilling down into every aspect of the governor’s budget proposal.
While the hearings can be tedious and long at times, they are the best way to learn about the intricacies of the budget proposal. At the start of the hearings, I made a brief statement and very plainly stated the questions
I would be asking the
witnesses:
►How is this budget going to make life better for everyday New Yorkers?
►Is it going to help our young people succeed and want to stay here and raise a family?
►Will it attract new people and businesses to our state?
►Will it meet the needs of our local governments and schools?
►And, at the end of the day, when families are sitting around their kitchen tables, paying their own bills, will this state budget make it easier or tougher on them?
The answers to these questions, quite frankly, have been mixed. I am not fully satisfied with the details that state commissioners and other agency heads have provided. Certainly, I will be advocating for some changes to the governor’s proposal as we move ahead.
Once the hearings conclude, Senate budget subcommittees will commence. Essentially, the committees take a specific portion of the governor’s budget proposal, dissect it line by line, place it under a microscope, and fine tune the plan to make sure it is fiscally sound and in line with public priorities.
Next, both the Senate and the assembly will pass their own budget resolutions. Then additional negotiations between the two houses and the governor will take place before a final plan is enacted. If all goes as planned, we will have a new state budget by the end of March, prior to the start of the new fiscal year on April 1.
I want to see an on-time budget, but more importantly, we need a fiscally responsible plan that holds the line on taxes and spending AND creates new opportunities for economic growth.
I joined with my Senate Republican colleagues to propose a “Real Solutions” budget plan at the start of the year, and I am continuing to advocate for the measures included in the plan.
Balancing the budget without any new taxes or fees while also providing real and significant tax relief to home and business owners. Lowering the cost of living so New York is more affordable.
Revitalizing New York’s economy so residents can find a good-paying job, take advantage of new and better opportunities, and raise their families here.