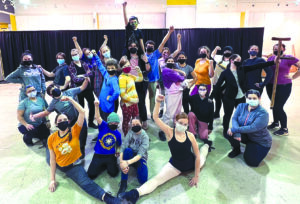 Set in turn-of-the century New York City, it’s the rousing, true-story tale of Jack Kelly (played by Quinn Kelley), a charismatic newsboy and leader of a band of teenaged “newsies.” When titan of publishing, Joseph Pulitzer (played by Doug Decker) raises distribution prices at the newsboys’ expense, Jack rallies newsies from across the city to strike against the unfair conditions and fight for what’s right!

With music by Alan Menken, lyrics by Jack Feldman and book by Harvey Fierstein, this production of Orpheus Theatre is directed by Mary-Jo Merk, with choreography by Angela Miller and Kaitlyn Jackson, musical direction by Tim Horne, costumes by Kathleen Mami-Moore, and stage management by Kate Simeon.

Newsies is packed with non-stop thrills and a timeless message, perfect for the whole family. Director Mary-Jo Merk is excited to present this powerful show to local audiences, saying “The story behind NEWSIES is true! The audience will get to learn a bit of American history, while at the same time enjoying an exciting, high-energy musical!”

General admission tickets are $20 for adults, $15 for seniors 65+ and $10 for children and students 17 and under. Tickets are available for purchase online at: www.orpheustheatre.org. If seats are still available, they will be sold at the door starting one hour prior to showtime.

Orpheus Theatre is committed to providing a safe theatrical experience for all involved. Seats available will be limited, in accordance with New York State and CDC guidelines. Audience members will be asked to wear a mask regardless of current mandates and/or vaccination status.