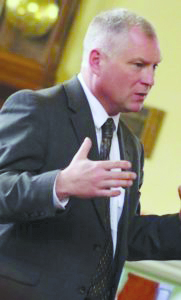 Otsego County District Attorney John Muehl is stark and passionate about New York State’s criminal justice reform to the point where — absent modification to the new laws — he won’t seek reelection in 2023. He’s on the record with that pronouncement from late last year, frustrated that from his point of view, New York’s bail and discovery statutes don’t let him do his job.

“With the combination of bail and discovery reform, for all practical purposes, they’ve legalized drug sales,” Mr. Muehl said in a conversation with The Freeman’s Journal/Hometown Oneonta. “Every night I think about the drug dealers that we’re just not doing anything with and all the drugs they’re pushing on kids in the city and around the county.”

The discovery law requires prosecutors to disclose their evidence earlier in case proceedings and eliminates the need for defense attorneys to make written demands to obtain and review evidence. The prosecution must allow the defendant to “discover, inspect, copy, photograph and test” all materials relating to the subject of the case, including the names and contact information for any person with relevant information regarding the case. In some cases, the law requires prosecutors to disclose the name and contact information of confidential informants.

Bail reform eliminated the option for judges in New York to set cash bail for most lower-level and nonviolent crimes, requiring judges to release people charged with most misdemeanors and nonviolent felonies with the least restrictive conditions necessary to reasonably ensure the person will come back to court.

“In order to prosecute a drug dealer, you have to have somebody be a confidential informant,” he said. “Dealers aren’t just going to sell to people they don’t know. So we would get somebody in trouble — a drug user — and in order to get their charges reduced or get some consideration they would go out and buy drugs for us. The police had excellent buy plans — everything video- and audio-taped with rock-solid excellent cases.”

“Now you don’t get any,” he said. “Before discovery (reform), 75 of 100 indictments in a year would be drug sales. In 2021, instead of doing 75 drug cases, I did two. Do you think that drug dealers stopped selling drugs? Nobody will be a confidential informant because we have to turn over their information under discovery rules.”

The District Attorney, however, takes no issue with the underlying intent of the bail and discovery reform laws — both of which will be front-and-center throughout this year’s campaign for New York’s governor, state Legislature, and other seats. Together they make for a singular hot-button issue that flares with every report of crimes violent and otherwise in every corner of the state.

“Mine is not a philosophical opposition,” D.A. Muehl said. “The problem here is the legislature put form over function.”

“I had an open-file policy in this office,” he said.

“Defense could come in this office and copy an entire file. I couldn’t give them the grand jury minutes, although I would’ve if I could. I would not give them confidential informants or the names and contact information for a victim if it was a violent crime.”

“Now, we literally have to turn everything over,” he said. “If a police officer sends me an e-mail in connection with the case and all it says is ‘Hey, I’ll call you after lunch,’ I have to turn that over. I have to turn over the radio calls like ‘I’m on the scene.’ What good does that do?”

Citing the mountain of paperwork his office must pass along under discovery reform, he added, “I have no problem with the defense getting all the information they need in a timely manner. You’ll talk to defense attorneys now, though, and they’ll say ‘We don’t want all this crap that you’re sending to us.’ But we have to. We’re required to send every last scrap.”

The shape of reform

The simmering debate boiled over two weeks ago in Manhattan when a gun-carrying suspect in a domestic violence case shot and killed two responding officers from the New York Police Department; this after an unrelated shooting of another NYPD officer and a spate of violent crime in the city’s subways. New York City Mayor Eric Adams called immediately for changes because “voluminous requirements of the new discovery bill jammed up too many cases.”

“We urge the State to distinguish what is truly necessary for discovery,” he said.

Others pointed at new Manhattan District Attorney Alvin Bragg and the ‘day one’ memo he circulated on his first day in office in January, calling for non-prosecution of crimes including trespassing and prostitution and reduced charges for crimes including knifepoint robbery and some residential burglaries. That directive, combined with bail and discovery reform, became immediate political fodder with demands on one side to repeal the reforms and, on the other, digging in heels to keep the reforms in place.

District Attorney Muehl seemingly looks right into the middle of that debate.

“The problem with the message is too many people are saying ‘we have to put bail and discovery back to where it was before,’” he said. “That’s not the case.”

State Senate and Assembly leaders who shepherded the reforms in 2019 and 2020 have, so far, rejected reopening the statutes for further tinkering. Senate Majority Leader Andrea Stewart-Cousins said in a wide-ranging public interview with Albany Times-Union Editor Casey Seiler that she and her conference continue to focus on data.

“There is a tremendous campaign of misinformation around bail and bail reform,” Sen. Stewart-Cousins said. “We need a resetting as to why we did it. This is the result of a disparate impact, negatively, specifically on Black and Brown communities. It was a position where people were being held on bail … it became, in many ways, prosecution if you were poor. If you had money you could get out, if you didn’t you stayed in.”

“It’s wholly unfair that because the sun doesn’t come up in the morning it’s bail reform’s fault,” said her Assembly counterpart, Speaker Carl Heastie. “I don’t want to go back to the times when every time somebody does something wrong jail is just the ultimate answer. An incident happens and it’s just jail jail jail.”

Both Leader Stewart-Cousins and Speaker Heastie said they are continuing to study statistics, including numbers showing that two percent of people released under the original bail reform law in 2019 were rearrested for a violent felony while awaiting trial.

“Yes, you can say that one of these is one too many,” Speaker Heastie said. “On the other side is the vast majority of people are showing up for their trials. I think it shows that there is some success.”
He, Sen. Stewart-Cousins, and Governor Kathy Hochul all have called for a deeper dive into solving the root causes of violent crime in New York.

“We have this love for guns and nobody ever wants to talk about it,” Speaker Heastie said. “This is a nationwide problem.”

Of those pushing for complete rollback of the laws, Sen. Stewart-Cousins said, “They’ve been able to make a talking point, but nobody takes this lightly. They’ve created a bogeyman by saying ‘these people don’t care about you.’ They’re just pandering to peoples’ fears and not being honest.”

“They have no idea,” she said.

The Otsego County District Attorney disagrees that the bail and discovery laws, as written, have a majority of people showing up for trials.

“Bail’s sole purpose is to ensure that the defendant will return to court,” D.A. Muehl said. “Now, no matter the defendant’s prior criminal history, you can’t hold them. You’re not allowed to look at whether they have ties to the community or their record of appearing in court. It makes no difference, you can’t consider it.”

He said it’s an expensive and high hurdle to bring back willful and persistent offenders.

The fomenting debate in Albany divides candidates, and not always along party lines. Democrats Stewart-Cousins and Heastie remain committed publicly to seeing through the reforms as written, fellow Democrat Hochul hasn’t backed away from the current law but reportedly reminded Manhattan D.A. Bragg she could remove him from office if he were not upholding the state’s canon and making
public safety a top priority. Democrat Rep. Tom Suozzi, challenging Gov. Hochul in their party primary, wants substantial roll-back; party Chairman Jay Jacobs backs Democrat New York City Mayor Eric Adams’s call for tweaks to bail and discovery reform. Republican state Legislators in the Senate and Assembly have made complete repeal their biggest agenda item for the 2022 legislative session and, no doubt, will carry that message through the campaign season to come in the summer and fall. And Republican gubernatorial frontrunner Lee Zeldin joins them in a highly publicized push for repeal, expansion of judicial discretion in setting bail, and other changes.

“I think they’re going to keep throwing money at it instead of fixing it,” he said, noting Governor Hochul’s call in her budget for expanded “pre-trial services” and a suggestion from Leader Stewart-Cousins that her conference would battle for greater funding to help prosecutors overwhelmed by the expanded workload.

“The problem is the law is poorly written in a lot of ways,” Muehl said. “There could’ve been a happy medium.”

“But when we’ve got somebody who already has five felonies, this person is a danger to society,” he said. “They’re a criminal. When we were in the middle of the big heroin epidemic I felt so horrible because you had all these people breaking into homes and stealing stuff. Thieves would pick people who were in Florida for the winter and, you know, these people have money and all of their jewelry. So much of this stuff was of sentimental value that can never be replaced and this S.O.B. has taken it from them. They’ll never get it back. And somehow we’re supposed to worry about the criminal?”