Trump's new personnel chief said his office will be hunting for people across the federal bureaucracy who are disloyal to the President, sources say

Why Nevada could surprise us

John King takes on Trump Jr.'s attack: This is dangerous

Opinion: What the New York Times didn't tell readers about its Taliban op-ed is shocking

CPAC aims to turn tables on Democrats after impeachment saga

According to Jim Tallman, Cooperstown Fire Chief, if you really want to know what’s good in a new town, go ask at the fire hall on Chestnut Street.
“Whenever I go someplace, I always stop in at their fire department,” he said. “I like to see what they’re doing, but I also ask for recommendations of where to eat and what to see. And people do the same here when they come in.”
As an unofficial branch of the Cooperstown Chamber of Commerce – and for its work in protecting and serving the community – 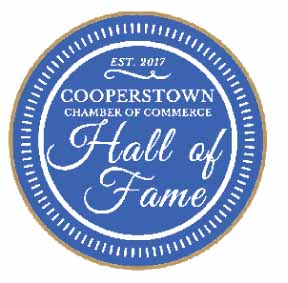 Department will enter the Chamber’s Business Hall of Fame at the third annual induction Thursday, March 28, at Brewery Ommegang.
The department was founded in 1813. The equipment: a small hand pumper. And all citizens were expected to be fire-fighters. “If you owned a home or a business, you had to own a leather bucket for a bucket brigade,” said Tallman, who has served as chief since 2011. “If you didn’t, you could be fined.”
Though the buckets are still on display, the department has come a long way, and now owns 10 vehicles, including two ambulances, two engines, tanker and a 104-foot tall ladder truck.
Those trucks aren’t just used for putting out fires –although they have responded to 48 calls this year – on Sunday, March 10, sirens blaring, they carried the CCS Hawkeyes basketball teams around the village as they arrived back from the regional championships in Binghamton.
“Having kids on the trucks is always a highlight,” Tall-man said. “We just love seeing them so excited, and seeing everyone lined up on the streets for one of these sorts of sports parades.”
The fire department also escorted Santa to his Pioneer Park cottage during the Christmas season, as well as helping the village during Induction Weekend, 5k races, open houses at the fire station and other events. “In the summer, half our weekends are helping out with events,” he said. “If the Chamber calls, we try to put out any assistance we can.”
It’s part of a long-standing tradition with the department. “Many years ago, the fire station used to be the focal point in the community,” said Tallman. “In the old firehouse, there was a community room upstairs. We’d show movies and have dances.”
For a time, it also functioned as the community center, where teens could go on weekends. “I used to hang out there when I was in junior high,” he said.
That building was torn down, and replaced with the current fire hall in 1972.
But they also participate in community life by making sure that everyone knows the rules of fire safety.
“It’s really important for us to integrate ourselves into the community, into the schools and not just hand out a paper with some fire prevention tips on it,” he said. “We invite the kids here to climb on the truck, we have someone come out dressed in the full gear so if there is a fire and they see that person coming towards them who looks like Darth Vader, they aren’t scared.”
In addition to school and family programming, the department also offers fire-prevention program for the elderly. “Fires are down,” he said. “And a lot of that has to do with education.
“One of the things we’re proud of is that the Chamber works hard to promote businesses, but also a hometown that residents can participate in,” said Tallman. “And we like to help out with that.”