Spring training for twins Barley and Rye at the Farmers’ 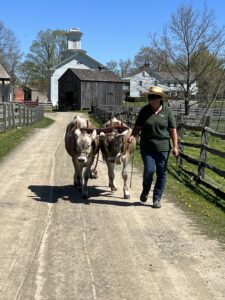 The training of the oxen at The Farmers’ Museum has begun and it’s fascinating.

“We have twins, they are Brown Swiss from Milford, it’s great!” said Bob Thompson, Associate Direcor of Agricultural and Facilities Support Services.

Twin brothers Barley and Rye were about a week old when they got to the Museum. Born in September, they already weigh 525 pounds apiece.  When they are grown, they will each weigh one ton.

“I try to make it fun for them,” she said. “You start off by simply leading them, petting them, talking to them all of the time.  Then come the verbal commands and yokes.”

The twins work on commands before the farmer puts on the yokes.

After the commands come the yokes.  “The yokes are used as a type of harness,” she said. “The wood apparatus goes around the neck of the oxen. It gets hooked up to chains or a piece of equipment, depending on what their job is for the day.”

“They start out with five-pound yokes. They adjusted nicely, then heavier yolks are introduced,” Ms. Vanalstine said.  “They will gradually get to 25-pound yokes.”

“We will train them for four to five years, then they will be ready and able to work the farm.  They are trained to work like a draft horse on the farm,” she said.

The life expectancy of a working ox is eight to ten years. While they train, they handle light work around the farm.

“Right now we need to move some sticks we will use for hops growing from one part of the farm to another. That’s perfect light training for them,” Ms. Vanalstine said.

Oxen were domesticated around 4000 B.C.

“You have to remember the ox was very popular in the United States on farms until around the mid-1800s when they started bringing horses in to work on the farms. Horses were a lot faster,” Steve Davis, a volunteer at the farm for nine years, said.

“We have two different forms of animal power,” he said. “Oxen were used on the farms, then horses and finally tractors came into the picture.  We try not to use tractors here at the Farmers’ Museum.”

He said some area farms still use oxen to plow field, but each plow requires two people (‘teamsters’) and one animal to operate it. The set-up can work up to one half-acre per day. When horses came entered the picture, it only took one person and one animal and they could do two acres a day.

Mr. Thompson said, “It’s a lot of fun training oxen.  We are very careful with all our animals, that’s the last thing we want is for an animal to get injured.”