He was born April 24, 1938 in Halcott Center, the son of Milbert and Edna (Simmons) Johnson.

He married Rosanne Brickwedde on November 17, 1956 at St. Mary’s Church in Oneonta. Together they owned and operated the family dairy farm, Fairlane Farm on Delhi Stage until the early ‘80’s. Lloyd then drove truck until he was stricken with Guillain-Barre Syndrome. After a grueling recovery he went to work at Ouleout Golf Course in Franklin for close to 30 years.

END_OF_DOCUMENT_TOKEN_TO_BE_REPLACED

Letter: The Babe’s grandson weighs in on Hall vote

Letter: The Babe’s grandson weighs in on Hall vote

Today, January 25, the National Baseball Hall of Fame makes its annual announcement of who has made the cut and has answered the call.

This should be a number one priority on the daily news shows if baseball is America’s Pastime, but the truth is baseball is the game that time has passed.

Tom Brady’s speculated retirement has commanded a seven-minute segment on “The Today Show” promoting football’s greatest player before the once-greatest entire sport in America. Product placement is crucial if you plan on competing, and once again the NFL has upstaged the brightest Baseball Analytic Champions. END_OF_DOCUMENT_TOKEN_TO_BE_REPLACED

And The World He Created’

END_OF_DOCUMENT_TOKEN_TO_BE_REPLACED

HAPPENIN’ OTSEGO for SATURDAY, MAY 4

END_OF_DOCUMENT_TOKEN_TO_BE_REPLACED

COOPERSTOWN – In a tribute to its most enduring fan, the Hall of Fame has created a digital archive of photos Homer Osterhoudt took in 1939 of Babe Ruth and the other honorees at the first
Induction Weekend – and they are available for viewing this weekend.

“We will miss Homer and hope this will be one small way to continue to remember his legacy, especially this Induction Weekend,” said Jon Shestakofsky, the Hall’s vice president/communications.

Thome Holds Back Tears While Visiting Hall Of Fame

While Visiting Hall Of Fame 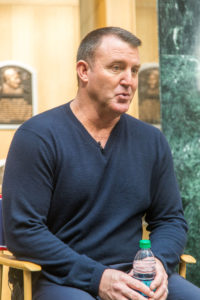 “Sorry I’m at a loss for words,” said 2018 Hall of Fame inductee Jim Thome as he addressed the media. “I’m just really enjoying all of this.” Thome was at the Hall of Fame for his orientation ahead of his induction to the Hall on July, 29. As he walked through the hallowed plaque gallery, Thome held back tears as he observed the plaques of the players honored before him.

“To just share this moment with everyone here is just an honor,” said Thome. The 22-year MLB veteran hit 612 home runs over the course of his career, earning him an 8th place spot on the all time home run list. When asked about his induction speech, Thome said he’s already begun working on it. “I’m in the process of jotting things down and putting them together right now.”

Thome joins Vladimir Guerrero, Chipper Jones, Trevor Hoffman, Jack Morris, and Alan Trammell to make up the 2018 Hall of Fame induction class, and will officially be inducted on July, 29, 2018.

COOPERSTOWN – They are scrapbooks filled with newspaper clippings, detailing the larger-than-life figure that was George Herman Ruth.

Photo after photo, story after story… first-hand accounts of one of the first media stars of the 20th century.

And then, a headline that could have been ripped from a 21st century mobile device – one that seemingly predicted the future.

Below the headline, three photos – taken Oct. 6, 1926 in St. Louis, Mo., during Game 4 of the World Series. The miracle of modern technology had allowed the transmission of those images across the country via telephone lines, showing readers in New York City what Ruth had done the previous day.

It’s the kind of history that can only be found in Cooperstown at the National Baseball Hall of Fame and Museum. But now, these and other pieces will be available to fans and researchers around the world through the Hall of Fame’s Digital Archive Project.

END_OF_DOCUMENT_TOKEN_TO_BE_REPLACED

For Babe Ruth’s Descendant, a Surprise

Visits to Cooperstown have always been part of Amanda Stevens’ life.

For the annual Baseball Hall of Fame Induction, her family would rent a house here and stay for several days. (Her father and brother still make the yearly pilgrimage.) And she often had a chance to meet Major League ballplayers. (Cal Ripken Jr. is her favorite.)

For Stevens, now living in Cambridge, Mass., is Babe Ruth’s great-granddaughter.
“There are many opportunities I’m blessedto have had because of it,” Stevens said Friday, June 13, after attending the opening of “Babe Ruth: His Life and Legend,” at the Baseball Hall of Fame. The occasion was the 75th anniversary celebration of the first Induction, but it was also the 100th anniversary of the Great Bambino’s entry into the major leagues.

Ruth – along with Ty Cobb, Walter Johnson, Christy Mathewson and Honus Wagner – was a member of the first class of inductees into Hall of Fame in 1937. The new exhibit expands space already dedicated to baseball’s most revered legend and highlights the star’s ascent in and exit from the world of baseball.

In the exhibit, Ruth’s story – an American hero’s rise to greatness from poverty – is told through news clippings, baseball cards and posters affixed scrapbook-style to the walls. It is interspersed with encased bats, balls, uniforms, equipment, and other memorabilia, including a ticket to the 1932 World Series game where Ruth purportedly pointed to centerfield on a 2-2 count before knocking a homer over the centerfield fence. This pre-hit gesture is known in baseball lingo as “the called shot.”

Videos help viewers experience Ruth’s life both on and off the ball field. Particularly compelling is the clip of Ruth’s farewell to baseball in which a movie camera catches The Sultan of Swat in a position identical to Nat Fein’s iconic, Pulitzer Prize-winning photo, “The Babe Bows Out.”

In both formats, the once robust Babe, now visibly frail, back turned to the camera, ball cap in his left hand, supporting himself with his right by leaning on a bat retrieved impromptu from HoF Yankees pitcher Bob Feller, bids good-bye to a Yankee Stadium crowd of nearly 50,000.

In an interview after she toured the exhibit, Stevens said she was genuinely pleased.

“It’s a terrific way to keep his memory alive through the generations. My family really appreciates all the hard work to make the exhibit possible. It’s important to us,” she said.

Stevens has her own role in perpetuating her ancestor’s legacy. She is involved with other family members in the management of www.baberuthcentral, which contains biography, statistics, fan stories, videos, audio interviews, photos, and special section for kids, who so famously adored Ruth.

Perusing the exhibit, Amanda – for the first time – saw a photo of her great-grandmother Claire Merritt Hodgson Ruth with George Herman “Babe” Ruth on their April 17, 1929, wedding day. Claire was Ruth’s second wife and remained married to him until his death in 1948. Claire Ruth died in 1976.

“I hadn’t seen that picture before. Family photos are what I’m most passionate about,” Stevens said. Perhaps it was her lucky day, too.

“This is a marvelous book to take on vacation. It’s divided into 47 chapters — each one featuring a different player, milestone, era or fracas — and you can dip into it whenever the mood strikes.”

COOPERSTOWN – U.S. Rep. Chris Gibson, R-19, will be among the dignitaries expected at the 11 a.m. opening ceremony of “Babe Ruth: His Life and Legend,” at the National Baseball Hall of Fame, part of its 75th anniversary celebration.

At noon, a roundtable discussion focusing on Ruth and his impact on the game will be held in the Museum’s Bullpen Theater and will feature Mike Gibbons, executive director of the Babe Ruth Museum; author Jane Leavy; and John Thorn, official MLB Historian.

At 1 p.m., an Authors Series event will feature Yankees historian Marty Appel, a SUNY Oneonta graduate, who will discuss his book “Pinstripe Empire” and feature a presentation on how Ruth set the standard for Yankees teams to follow.

END_OF_DOCUMENT_TOKEN_TO_BE_REPLACED

COOPERSTOWN – Seventy-five years after Babe Ruth stood on the steps of the Baseball Hall of Fame and waved to the gathered crowd, his family will return to Cooperstown to celebrate his legacy as part of the Hall of Fame’s 75th Anniversary Celebration on Thursday, June 12.

The festivities will kick off at 11 a.m. on the steps of the Hall, with Hall of Famers Joe Morgan and Cal Ripkin Jr., as well as board Chairman Jane Forbes Clark and President Jeff Idelson leading the crowd in singing “Happy Birthday,” complete with cake.

At 1 p.m. Homer Osterhoudt, Howard Talbot and Catherine Walker will share their memories of that first induction, and the museum will launch two virtual photo galleries featuring highlights from several museum exhibits.

On Friday, June 13, the museum will debut their newest exhibit, “Babe Ruth: His Life and Legend,” featuring artifacts, movie footage and never-before-seen ephemera from the history of the Bambino.

That evening, Morgan and Ripken will be part of a “Voices of the Game” program celebrating their legacy.

Osterhoudt Looks Back at First Induction

Homer Osterhoudt, who helped build the Baseball Hall of Fame from the first brick, shares his photos of the first Induction ceremony on June 12, 1939.