A woman agreed to have a baby for a Facebook friend through Messenger. Now, they’re locked in a custody war.

Europe's Balancing Act Between the U.S. and China Is Buffeted From Both Sides

BERKSON: Learning to sink or swim at Perkins

Learning to sink
or swim at Perkins 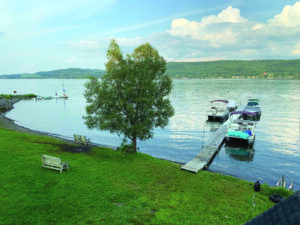 On my way home, while passing over the Elmer Sitts Road that links Monticello to Hyder Road, I always note a sign that marks “The Stauring Retreat,” which amounts to several small camps situated in the woods. Invariably, I think, “what ever happened to Chick Stauring?” I haven’t seen him in more than 50 years.

I don’t even know if he uses the retreat or if he lives anywhere near Richfield. I do know that I am and will always be deeply indebted to him.

When I was about 12 or 13, all the kids used to go to swim at Perkins on Canadarago Lake. There was a long dock that took you out into deep water and beyond that a large float on which we played innumerable games of tag. At that time there was a gas pump, boat rentals and a store up by the road where the Perkins sold everything from fishhooks to hamburgers.

END_OF_DOCUMENT_TOKEN_TO_BE_REPLACED

A man from Mohawk died in Canadarago Lake after he went after his boat that had gone adrift on Saturday, July 31, state police said.

David Morrisey, 54, was on Deowongo Island at the time. A joint effort of the state police, Fly Creek EMS, Richfield EMS, Otsego County Sherriff’s Department and Milford Fire Department made an effort to recover his body, which was eventually found by the New York State Police Underwater Recovery Team.

BERKSON: Howling at the moon to help ‘the chickens’

Howling at the moon
to help ‘the chickens’

During a cold snap several years ago, night temperatures up on our hill on the west side of Canadarago Lake were hovering around 22 below zero. Worried about my chickens freezing their gizzards off, I hung a 100-watt bulb on a wire in our small coop inside the barn and let it burn 24 hours a day.

I’m sure it raised the temperature a bit, but it also increased egg production. In fact, after a few days of continuous light, my chickens started laying eggs like crazy. Concerned that they might burn themselves out, I consulted neighbor Jim McNulty, who had attended Cornell University and now lived at the foot of nearby Panther Mountain. He agreed the hens could become exhausted, but warned that if I suddenly cut off the light, I could drive my chickens into a molt, which was bound to kill them in this cold weather. At the same time, to keep the water in the coop from freezing, I installed a heater in the water bucket. Between the light and the heater, I was worried about causing a fire.

Again, McNulty advised me to do away with the water heater and put snow in the bucket, which would quench the chickens’ thirst and wouldn’t freeze like water. I was impressed. He also informed me chickens in a draft-free coop didn’t need the 100-watt bulb. Removing it was no small step because beloved Pee Wee, a chick I had saved by performing a virtual Caesarian on an egg in water, was among the flock I was about to pull the plug on.

END_OF_DOCUMENT_TOKEN_TO_BE_REPLACED

DRAMA AT COUNTY BOARD

COOPERSTOWN – A coalition of Republican and Democratic reps took control of the floor at this morning’s county Board of Representatives’ meeting and approved the $151,000 sale of the 87-acre Rose Hill property to the Otsego Land Trust, a non-profit not required to pay property taxes.

The land, atop Panther Mountain on the north end of the Town of Otsego, connects with the Land Trust’s 85-acre Fetterlee Forest, doubling the trust’s holding, which features a scenic overlook of Canadarago Lake and Deowongo Island, as well as hiking trails.

END_OF_DOCUMENT_TOKEN_TO_BE_REPLACED

Died When Kayak Capsized In Lake

RICHFIELD SPRINGS – Dustin Norman Groat, 19, of Richfield Springs, who passed away Tuesday, June 19, 2018, when his kayak capsized on Canadarago Lake during a storm.

He was born on Feb. 2, 1999, in Cooperstown, the son of Eric Groat and Evelyn Seward, and graduated from Richfield Springs Central School, Class of 2017.

Dustin and his dad had a special connection and he loved spending time on the farm with him. His favorite place to be, and where he was happiest, was outside. Whether he was working on the farm, mowing lawns, or just hanging out with family. He enjoyed operating heavy farm equipment in the fields.

END_OF_DOCUMENT_TOKEN_TO_BE_REPLACED

According to State Police, Dustin Groat, 19, Jordanville, was with another teenager when they got into their kayaks at the Canadarago Lake Boat Launch at approximately 7:30 p.m. and paddled to Deowongo Island.

END_OF_DOCUMENT_TOKEN_TO_BE_REPLACED

County To ‘Micro-Mill’ Route 22 From Schuyler Lake To Richfield

From Schuyler Lake To Richfield

END_OF_DOCUMENT_TOKEN_TO_BE_REPLACED

Parades On The Lakes

BOAT PARADE – 3 p.m. Decorate your boat and sail, motor, paddle, or whatever from 3 mile point to Lake Front Park. Decorate boats anyway you want. All entries are welcome at any point. Enter the contest at 3 mile point. Spectators can view from Lake Front Park, Cooperstown. Contact Wayne Bunn (518)542-6630 or visit otsegolakeassociation.org

BOAT PARADE – 6-7:15 p.m. Show your boat in its Patriotic glory and then view the fireworks after. Meet at the New York State Boat Launch, 135 Denison Rd., Richfield Springs. www.canadaragolake.com

FIREWORKS – 9:30-10 p.m. Celebrate the Fourth of July with an amazing show above Canadarago Lake. www.canadaragolake.com

END_OF_DOCUMENT_TOKEN_TO_BE_REPLACED

How To Catch An Otsego Bass

WITH THE SNOW EMERGENCY CONTINUING MONDAY, BE SURE TO CHECK TO SEE IF AN EVENT IS CANCELLED BEFORE YOU VENTURE FORTH

END_OF_DOCUMENT_TOKEN_TO_BE_REPLACED

The meeting is at 1 p.m. in Classroom A at The Meadows, hosted by the Otsego County Planning Department. It is free and open to the public.