Post-rally, Bohler’s life is that of average teen

COOPERSTOWN – When at least 250 people gathered May 3, on the lawn of the Otsego County Courthouse to show support for the area’s Asian-American population, and then stayed for an hour to listen to speeches during a rainstorm, many of the speakers marveled that the rally was organized by a 15-year Cooperstown Central School freshman, Cate Bohler.

They were not alone in their surprise. Bohler and her mom, Jeannine Webster, told The Freeman’s Journal on Friday, May 14, that they were surprised, too.

“I kind of feel like I didn’t really realize what I was doing,” Bohler said. “I think it was when I was hearing the speakers speaking and then it started raining and people stayed mostly.”

“All of the young people involved learned a powerful lesson about community,” Webster said. “Looking back I am not really sure how it came together.”

END_OF_DOCUMENT_TOKEN_TO_BE_REPLACED

About 250 people attended a rally Sunday, May 2, at the Otsego County Courthouse, to support the community’s Asian American and Pacific Island residents.

The “Otsego Rally for Solidarity with Asian Americans” was organized and run by a group of Cooperstown Central School freshmen, including 15-year-old Cate Bohler, who said she wanted to speak up to support her friends or anyone who is being harassed.

“As a young Asian-American girl, hearing people call COVID the China virus is hurtful,” Bohler said, reading from her prepared statement about why she wanted to stage the rally. “It is more than hurtful. It is harmful. It perpetuates anti-American sentiments and racism.”

“The deep-seated nature of systemic racism requires us to make continuous choices and take continuous actions to advance anti-racist ideas in the public space,” Lapin said.

END_OF_DOCUMENT_TOKEN_TO_BE_REPLACED

The League of Women Voters of the Cooperstown Area would like to applaud Jaina Bischof, Cate Bohler, Charlotte Feury, Riley Fillion, Elizabeth Hughes, Olivia Lowenguth, Maya Pandit, who, with the support of their families and friends, organized the Otsego Rally for Solidarity with Asian Americans on Sunday, May 2, in Cooperstown. These students’ activism is fully aligned with the League of Women Voters’ goal to create a stronger, more inclusive democracy.

Such outstanding civic leadership and teamwork is an inspiration to all of us to commit ourselves to combating racism through character, intelligence, and compassion. It has been said that it takes a village to raise a child; in this case it is these teenagers who have raised the Village of Cooperstown to a new level of community engagement with this highly charged issue. With the shining example of these students to light our way, let us continue this important and good work of making Cooperstown, as Dr. Namita Singh put it so well in her speech at the rally, the “all-American village” of this century: one that celebrates our nation’s diverse cultural, racial, ethnic, and religious roots and on these strong foundations remains a thriving, vibrant community. 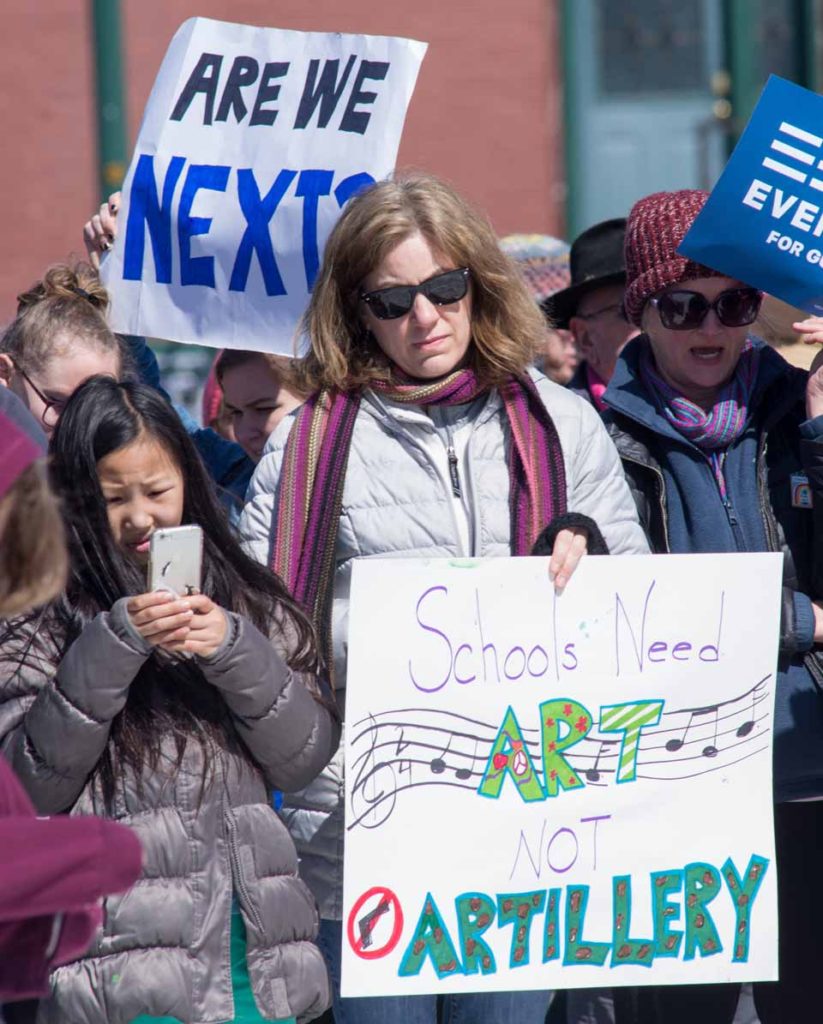 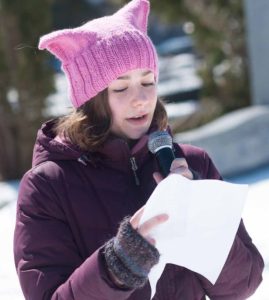 Jeannine Webster and daughter Cate Bohler were among anti-gun-violence protesters this afternoon at the “March For Our Lives” in Cobleskill.  Similar rallies were held across the country today in sympathy with one in Washington D.C. led by students from Marjory Stoneman Douglas High School. At left, CCS junior Josie Hovis was among the speakers from CCS, as well as Emma Trahan, Josie Hovis, Ray Hovis, Alex Bohler, Emma Morlang, Harrison Weiss, Madelyn Weiss, Danyell Monk, Emily Fydenkevez, Sophia Soloveitchik, Alyssa Pacatte and Olivia Stanley.  Kendra Gross, a student who lives 15 minutes away from Parkland and was visiting this area, also participated, Josie reports.  (Kyle Taylor for AllOTSEGO.com)