COVID Impatience Can Be Dangerous

From: The Daily Gazette Editorial Board, Saratoga

The return to normalcy has started. But we’re not there yet.

And if you think we’re beyond the bad old days of seeing big spikes in cases, look no further than Saratoga Springs High School, where about two dozen students contracted the virus recently.

Officials believe the outbreak was largely the result of a teen party in Lake George the weekend of April 10.

… We’re almost there! Now is not the time to get complacent and let down our guard.

END_OF_DOCUMENT_TOKEN_TO_BE_REPLACED

For Sale: One Cider Mill In Fly Creek

One Cider Mill In Fly Creek

The Fly Creek Cider Mill, which dates back to 1856 and has been owned by the Michaels family for two generations, closed in January. Co-owner Bill Michaels said at the time that the coronavirus pandemic had hurt sales to the point where it was no longer cost effective to remain open.

END_OF_DOCUMENT_TOKEN_TO_BE_REPLACED

OCCA To Adjust With 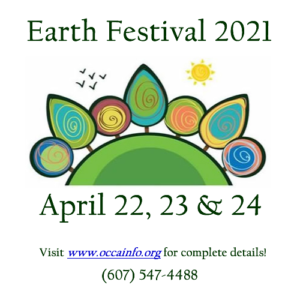 Earth Festival will again be affected by the coronavirus pandemic, but this year the Otsego County Conservation Assocation is better prepared to replace its annual events with a virtual presentation from Thursday, April 22 to Saturday, April 24.

“In March (2020), I think we were all thinking, ‘let’s not cancel, yet,’ it will all blow over,” OCCA Program Director Jeff O’Handley said. “It seems crazy to think about looking back. We had no idea what to expect.”

To salvage an Earth Festival last year, OCCA kept some events going with social distancing, stressed its normal recycling efforts via dropoffs and refocused on the fly, O’Handley said. This year’s event has been much more focused to allow the group to use the virtual tools that have sprung up during the coronavirus pandemic. “You can’t do things like you used to do them,” he said. “It has been a puzzle to figure things out and you just hope you are providing people with some strong programming.”