Larry King remembered by Suzanne Somers: 'Not many people like him'

ONEONTA – Now, the hard work begins.
What’s now called Otsego County 21-member “Energy Working Group” will convene for the first time at 5 p.m. Wednesday, Feb. 27, in Old City Hall.
And coming out of the Otsego County Chamber’s “Energy & Infrastructure Summit” two weeks ago at The Otesaga, the word  “compromise” is in the air.
“I don’t see compromise as being a dirty word,” said county Rep. Michele Farwell, who with Meg Kennedy, C-Mount Vision, is leading the effort. “I see compromise as being able to actually accomplish genuine movement forward. I feel that this is what my constituents look for in county government – getting the real work done.”
Still, they expect challenges. She and Kennedy both “noticed a pattern,” Farwell continued. “One side says, we need jobs. And the other side says, we need to protect the planet.”
All 21 members of the Energy Working Group – divided into four groups: Building & Efficiency, Energy Supply & Distribution, Economic Development, and Environment – are expected at the first meeting.
Also attending with be a group of “technical advisers,” from an engineer to a lawyer.
At this point, the timeline, according to Kennedy is that “the plan will be ready for SEQRA review in 18 months. Hopefully ready to adopt in roughly 24 months. An ambitious goal, but I think we can manage.”
After the initial meeting, each group will meet and select a leader who will keep a Leadership Group – Kennedy, Farwell, Oneonta Town Supervisor Bob Wood, City Engineer Greg Mattice and the OCCA’s Leslie Orzetti – apprised monthly on progress.
The Leadership Group will attend meetings on a regular basis, and continue with monthly groups.”

No, We Can’t Save World Alone; Yes, We Can Embrace Opportunity 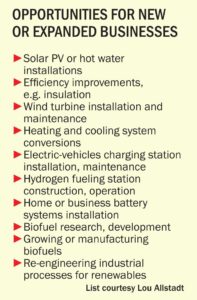 With 0.018 percent of the U.S. population (less than 2/100ths of one percent), and 0.00008 percent of the world’s (less than 1/100,000th of one percent), the fate of The Earth isn’t going to be decided between Richfield Springs and East Worcester.
This frees us to think about Otsego County, what we need today, and what the opportunities are in the near-to-
mid future. END_OF_DOCUMENT_TOKEN_TO_BE_REPLACED

Energywise, We Can Have It All: Natural Gas Now, Renewables Later

Energywise, We Can Have

It All: Natural Gas Now,

The Otsego County Chamber board and president deserve a heartfelt “thank you” for having the vision and courage to host the “Energy Summit.”
Speakers from New York and Pennsylvania talked about fossil fuels and renewables including biomass, ethanol, electric cars, wind, solar and geo-thermal. At the end of the day, it was clear that, although promising for the future, renewables are not currently capable of replacing or offsetting our demand for energy provided by fossil fuels.
That does not mean we should abandon our pursuit of alternative sources of energy that emit less carbon and are cost-competitive with fossil fuels. END_OF_DOCUMENT_TOKEN_TO_BE_REPLACED

Exchanged, But ‘Now The Work Begins’

COOPERSTOWN – In the end, 170 – up from 125 a week ago, and 155 a couple of days ago – today listened for eight hours to presentations on the United States’ – and Otsego County’s – energy future from some of the most knowledgeable people in New York State.

The venue was the Otsego County Chamber of Commerce’s “Energy Summit:  Energy & The Economy,” which finished up in late afternoon in The Otesaga’s pretty-close-to-full ballroom.

When it was over, Al Rubin, chairman of the chamber’s board, and chamber President Barbara Ann Heegan both said they were pleased by the amount of information the 19 varied presenters delivered in mostly 15-minute segments between 9 a.m. and 5 p.m.

“This wasn’t about debate,” said Rubin.  “This was about listening to what other people had to say.  This event met and beat our expectations.”  But, he added, “The work begins now.”

END_OF_DOCUMENT_TOKEN_TO_BE_REPLACED

150-Plus Head To Debates At Energy Summit

150-Plus
Head To Debates
At Energy Summit

It’s exploded like, well, a gusher.
The Otsego County Chamber of Commerce “Energy Summit” Thursday, Jan. 31, at The Otesaga has expanded from six to nine hours, and will include 19 speakers in an attempt to give everybody a chance to be heard.
As this edition went to press, Chamber Executive Barbara Ann Heegan said 155 people had registered.
Follow real-time reports throughout the day at www.AllOTSEGO.com

►A STATE TROOPER was wounded after exchanging gunfire with suspect after a car chase early yesterday evening on Route 17 in the Town of Kirkwood, south of Binghamton.
►A DOG PARK is the focus of a subcommittee of the city’s Operations, Planning and Evaluation committee, who will explore whether one should be added to the Neahwa Park Master Plan
►CONGRESSMAN DELGADO D-19th, announced he will serve as a member of the Small Business Committee.
►SCHENEVUS CENTRAL SCHOOL is one of only five school districts in New York State that are under “significant fiscal stress,” state Comptroller Tom DiNapoli reported.