Fact check: Trump's false claims about his record on manufacturing and coal jobs

Analysis: Why Trump just got his best two polls of the cycle

Analysis: This Senate race shows you can never be too extreme in Trump's GOP

Senate resolution to honor Ginsburg blocked after debate over language

A 'distressed' Birx questions how long she can remain on task force, sources say

A Louisiana officer who claimed someone shot him actually shot himself, police say

Energywise, We Can Have

It All: Natural Gas Now,

The Otsego County Chamber board and president deserve a heartfelt “thank you” for having the vision and courage to host the “Energy Summit.”
Speakers from New York and Pennsylvania talked about fossil fuels and renewables including biomass, ethanol, electric cars, wind, solar and geo-thermal. At the end of the day, it was clear that, although promising for the future, renewables are not currently capable of replacing or offsetting our demand for energy provided by fossil fuels.
That does not mean we should abandon our pursuit of alternative sources of energy that emit less carbon and are cost-competitive with fossil fuels.
Natural gas, our cleanest burning fossil fuel, is currently abundant and inexpensive relative to renewables and thus offers us a bridge to the time when one or more renewables is capable of replacing it by being available, reliable and cost-competitive.
If a renewable is going to totally replace a fossil fuel it must be available 24 hours a day and 365 days per year. If it can’t meet that criterion, then it will be relegated to being part of a mix or blend of energy sources.
At present, solar does not meet that criterion, as the sun doesn’t shine 24 hours per day and we don’t yet have a mechanism of storing energy created during the day while it is shining.
•
Both Oneonta Mayor Gary Herzig and state Sen. Jim Seward, R-Milford, echoed the need to pursue future renewable alternative energy sources, but they were clear in their recognition of the fact that we need natural gas and we need it now.
As the temperature hovered around minus-2 degrees and attendees were talking about frozen pipes, one speaker said that we shouldn’t upgrade our infrastructure for natural gas now because it might derail their agenda to replace it with one or more renewables.
I couldn’t help but wonder if the organization he represented would be willing to pay to thaw the pipes that froze in the meantime. Should they be required to?
What is a realistic timeline for making the transition a reality? If we wanted to site a wind farm or large solar facility, we would likely be, after going through the SEQRA process, eight to 10 years out. We don’t have 8-10 years of going without enough natural gas to meet our current, no less future, needs.
That’s why the natural gas decompression station currently under discussion at the former Pony Farm commerce park makes sense. It is a much-needed bridge to help get us to the point where renewables are proven, reliable 24/7 and can be brought on-line.
•
Another speaker spoke of all the things he had done to remove himself from the grid. Again, I couldn’t help but wonder how he paid for it – solar, geo-thermal and a $100,000 Tesla electric car. Would the savings ever allow him to recover those incremental costs?
Maybe that’s not important to him, but it’s been my experience that if something is going to be widely accepted, the buyers expect it to be cost-effective. 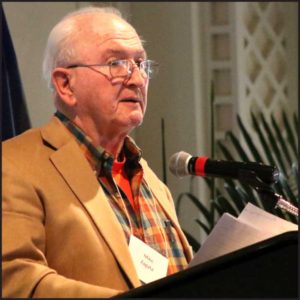 As I’ve said before, a healthy environment and a healthy economy are not mutually exclusive, rather they are inextricably intertwined. He went on to say that he is totally off the grid and that he charges his electric car (the one that took two times as much energy to produce as a traditional combustion engine vehicle) solely from the solar panels on his roof.
I thought about that on the way home and asked myself if that meant he only drove his car at night – it would have been charging during the daylight hours as that’s when the sun shines. Besides that, I know someone from this area who installed solar only to find that during our recent “dark days of fall,” he spent considerable time on the grid.
When I left the conference, I took a rough count of the mix of vehicles in the parking lot – about 75 percent were relatively low mpg SUVs – including mine. We still have to match our actions with our rhetoric.
•
Another speaker talked about how renewables are becoming cost-competitive with fossil fuels like natural gas. Unfortunately the cost number he used for offshore wind delivered to market – $.05kwh – was one-fifth – $.245kwh – the actual cost.
What that means to you and me is this. If we are forced to buy something that is subsidized, provides rebates and still costs more than natural gas, either our utility bill is going up, our taxes are going up or, as is most often the case, both are going up.
What’s more, looking only at cost comparisons ignores the other half of the equation – reliability. It doesn’t mean anything to a homeowner whose pipes are freezing that solar is cheaper than gas if it’s nighttime. If he or she can’t get the energy needed to heat his or her house, the pipes are going to freeze.
•
The fact that we are now able to have this discussion without shouting at one another is a good thing. As the Chamber’s board chair, Al Rubin, so eloquently stated, “the work has just begun”.
If we can focus on the goal – clean, abundant energy now and a transition to clean, abundant renewable energy for the future, then we will have a future.
If we don’t, our future is unclear.
Mike Zagata of West Davenport, former DEC commissioner in the Pataki Administration, spoke on “Balancing Our Options”
at the chamber’s