END_OF_DOCUMENT_TOKEN_TO_BE_REPLACED

In Memory of John, 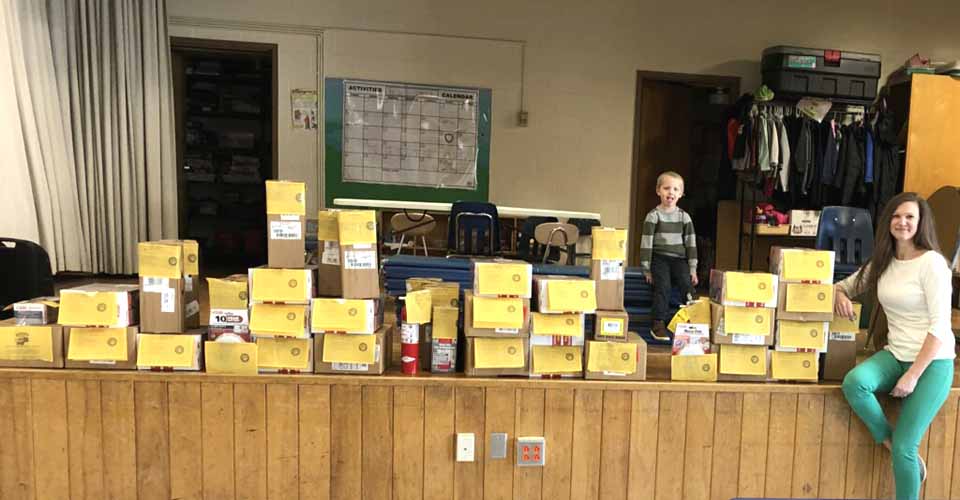 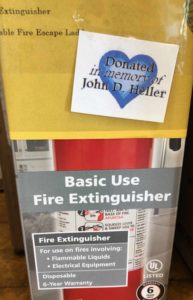 Erika Heller, with son Rawley, shows off the 22 fire extinguishers and 26 emergency ladders the Valleyview Elementary School Parent Teacher Organization purchased with funds donated in memory of her brother-in-law, John Heller, the former fire fighter who died saving Rawley and his brothers Maddox, Donovan and Macall, as well as fiancee Amber Roe, from a fire in Dec. 2018. Over $1,500 was raised to purchase the fire safety equipment, meaning that every family who requested an item received one free of charge. The equipment was also tagged in Heller’s memory with a card, shown at right. “We lost John, but an important conversation was started,” said Heller. “Needs were identified, and thanks to so many generous donors, more families in Oneonta can be safe. It all began with Johnny’s sacrifice for our family and he would be proud to know that he is still helping to save lives.” Parents can pick up their requested items today and tomorrow after school.

END_OF_DOCUMENT_TOKEN_TO_BE_REPLACED

“We thought they were hilarious,” said Erika. “He just started putting them on, and my kids” – Donovan, Maddox, Macall and Rawley – “were showing him where else on his beard he could hang them!”

They found those beard ornaments, boxed up with the rest of his Christmas gifts, at his Walling Ave. apartment where he died after getting those same four nephews, as well as his fiancée Amber Roe,
to safety.

Gabriel Truitt, whose trial starts Jan. 21, is charged with setting fire to the door of the apartment below, just four days after Christmas 2018.

“We put them in the memorial binder we made for him,” Erika said. “This year, mom Gayle had fake beards and beard ornaments for everyone to wear at Christmas. He wouldn’t have wanted everyone to be sitting around, bummed out. It was right up his alley.”

In the year since John’s death, the family and the community have rallied behind causes and communities John supported to keep his memory alive.

At Heller’s funeral, state Sen. Jim Seward, R-Milford, said he would be introducing a resolution bestowing the Liberty Medal, the upper house’s highest honor, on Heller. “The next week, he read the resolution on the floor, which makes it a permanent part of the state record.”

The family founded the John Heller Hero Award at Valleyview Elementary School, $250 given annually to a graduating fifth grader. “We held a spaghetti dinner and pie sale in March to raise money for it,” she said. “And we raised $6,000.”

The first award was given in May to Gabby Cashman, who saved a fellow student with the Heimlich maneuver.

Truitt was arrested in April, and that same week, Erika found out that Maddox, who had third-degree burns on his arm from the fire, would need surgery. “The burns were so deep they wouldn’t heal,” he said. “They had to do an excision, and he’ll have the scars forever. But he’s a trooper.”

But there was good news in April too, when Oneonta Job Corps, where Heller worked as a life skills superVisor, dedicated “The Octagon” – a third-floor hallway inter-change – in his memory, with
photos and a plaque. “He was an important part of their team,” said Erika. “At their awards dinner, so many of his students got up and talked about the impact he had on their lives. He brought out amazing things in them.”

Heller was buried in Charlotte Valley Cemetery in June. “We all wore our ‘Johnny Strong’ shirts,” T shirts made in his memory, she said. “It was a good gathering.”

And in November, Erika and Melanie Ferrara, a fourth-grade teacher at Valleyview, got fire safety equipment into homes that were lacking. “We raised enough money to buy every requested item,” she said. “25 each of safety ladders and fire extinguishers.”

The Hellers have also used that time to come together as a family. “John and Amber were adopting a puppy from Ohio when everything happened,” said Erika. “But they still brought him here, and we threw a ‘puppy shower’ for her.”

Gus, a bulldog mix, is a registered support dog. “Amber is the strongest person I have ever met,” she said. “And she’s still our family. John may be gone, but we’re keeping her.”

On Oct. 12, what would have been their wedding day, the family gathered with Amber at Rustic Ridge Winery, where the couple had planned their wedding. “The owners, Laura and Rick Bennett told her, ‘if you want to do something, we’ll still be your venue.’ So we all got together to celebrate what should have been.”

“He’s always on our minds,” she continued. “We’re focusing on the good things, but we’re always thinking of him and missing him.”

ONEONTA – As the one year anniversary of former firefighter John Heller’s death approaches, his sister-in-law, Erika, is making sure he’ll continue to save lives.

“Fire safety is a conversation no one wants to have,” said Erika. “But John got that started, and we see this as a way of him continuing to help people.”

In Heller’s memory, Erika has partnered with Melanie Ferrara, a fourth grade teacher at Valleyview, to help families get the life-saving equipment they need in case of a fire.

“The Parent Teacher Organization usually does a raffle for a fire extinguisher or a ladder during Fire Safety Month in October,” she said. “We send kids home with a flier asking the parents if they want to enter and pick a few winners.”

But “dozens and dozens” of kids returned with filled-out forms, and Melanie realized that too many homes were without smoke detectors, emergency ladders and fire extinguishers.

“I surveyed just my class and asked if they had ever seen any of those things around their house, and so many said they hadn’t,” she said. “These are basic, life-saving pieces of equipment.”

Heller, 38, got his four nephews Donovan, Maddox, Macall and Rawley, as well as his fiancée, Amber Roe, out the window and to safety before succumbing to carbon monoxide poisoning in the Dec. 29 fire at their 5 Walling Ave. apartment.

In January, Gabriel Truitt, 33, will stand trial for the alleged arson and first degree murder.

“There were no smoke detectors in the apartment,” she said. “It was four minutes between when John woke them all up and when he died. You don’t realize how little time you have.”

She partnered with Erika and the PTO to begin a fundraising campaign, aimed $1,500 to fill a “wishlist” of items.

“We want everyone to have some form of fire safety equipment,” she said. “Being prepared takes a lot of the fear out of it, especially with kids.”

Last year, she said, she had a student who was scared he wouldn’t be able to get out of his second floor bedroom in case of a fire. “We got him a ladder and showed him how to use it,” said Melanie. “He felt much better after that.”

Erika and Melanie began reaching out to local business, including Fyr-Fyter, Munson’s, Lowes and Home Depot for donations, which they will give away at an assembly in November. “They felt like this was a really important thing,” said Erika. “And I think having it connected with John really made it hit home.”

They are also accepting individual donations. “You can send a check to the PTO or buy something and bring it by the school,” said Melanie.

In addition to the items they are giving away, they are encouraging all households to go to the American Red Cross website and request a visit, where they will install up to three smoke detectors free of charge.

“Even if you’re in a rental, it’s important to make sure everything is in working order,” said Erika.

Since Heller’s death, Erika has become an advocate for fire safety and good deeds, keeping her heroic brother-in-law’s memory alive with a scholarship to a graduating fifth grader at Valleyview.

In May, they gave the first award to Gabby Cashman, who saved a fellow student by giving the Heimlich maneuver when he was choking. “Now when she graduates high school, she’ll get $250. We raised $6,000 from the first fundraisers, so now every year, we’ll give that award.”

“I was thrown into this situation,” said Erika. “It’s easy to be mad and focus on the bad, but I need to put my energy into doing what John did – helping people.”