Wisconsin bill would require national anthem before sporting events: 'We are still one country'

Vodka made with apples, other ingredients from near Chernobyl seized in Ukraine

END_OF_DOCUMENT_TOKEN_TO_BE_REPLACED

Known For Baroque Opera, She’s Praised For Book, Too

She’s Praised For Book, Too 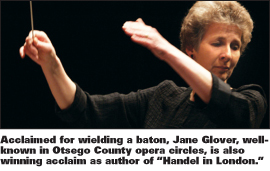 CHERRY VALLEY – Fixing up a guest house in Cherry Valley, Graham Humes was worried what his summer tenant, Jane Glover, in town to conduct “L’Incoronazione di Poppea” at the 1994 Glimmerglass Festival, might think.
“I was afraid she wouldn’t like it!” he said. “But we got a piano in there for her, and she was very happy.”
So happy, in fact, that she returned for the next five years to conduct at the festival, often having dinner with Humes or spending an evening at the Rose and Kettle. “She was a charming woman who loved Cherry Valley,” said Humes.
Glover, a renown conductor of Baroque music, has recently released her second book, “Handel in London: The Making of a Genius” with MacMillian. The book has receive a starred review from Kirkus and praise from the Washington Post and Wall Street Journal.
“I thought the book was wonderful,” said Francesca Zambello, Festival general & artistic director. “She’s a wonderful collaborator, very connected to the drama, while also having an eye to the conventions of the baroque pieces.”

END_OF_DOCUMENT_TOKEN_TO_BE_REPLACED

HARVEST FESTIVAL – 10 a.m.-5 p.m. Celebrate the fall harvest with food, music, and activities for all. The Farmers Museum, Cooperstown. www.farmersmuseum.org/Harvest-Festival

END_OF_DOCUMENT_TOKEN_TO_BE_REPLACED

ART OF ANATOMY – 2 p.m. Discover how artists and doctors have collaborated in the study of the human body over time and what they have learned from each other. Learn it all at this lecture by artist/MD Allison Hill-Edgar. Tickets, $15. The Fenimore Art Museum, Cooperstown. www.fenimoreartmuseum.org/Vanitas-Dissected

END_OF_DOCUMENT_TOKEN_TO_BE_REPLACED

Art For The Holiday

END_OF_DOCUMENT_TOKEN_TO_BE_REPLACED

2 Musicals, Plus ‘Scalia/Ginsburg,’ Featured By Glimmerglass In 2017

Featured By Glimmerglass In 2017

COOPERSTOWN – As the Glimmerglass Festival opens its 2016 season this weekend, it announced its 2017 season, which will include two favorite American musicals,  Gershwin’s “Porgy and Bess,” and  Rodgers & Hammerstein’s “Oklahoma!”

Also, the repeated visits of Supreme Court Justic Ruth Bader Ginsburg will be honored with the production of “Scalia/Ginsburg,” based on her opera-based friendship with her ideological foe, who passed away earlier this year.  It will star 2017 Artist in Residence William Burden.

END_OF_DOCUMENT_TOKEN_TO_BE_REPLACED

At Cooperstown’s Lakefront Park In ’16