Davante Adams questions future if Aaron Rodgers leaves Packers: 'I'd have to do some extra thinking'

COLONE: As Upstate Declines, There Will Be More Schenevuses

As Upstate Declines, There

What’s to blame for the financial stress currently being experienced by the Schenevus Central School system?

Mismanagement? Nah.  A ban on hydro-fracking? I doubt it.

I think it’s regional population loss which has negatively impacted much of Upstate. If there’s anyone or anything to blame, I’d suggest putting it on the multi-generational commercial decline within the City of Oneonta and the
surrounding urban center!

Small and medium-sized city/urban centers have long been seen as drivers of commerce and culture, both directly for their internal constituents, as well as for the people in the rural settings around them.

The ongoing economic softness within the city and town of Oneonta is having a ripple effect in the outlying areas; and I suspect there will likely be more Schenevus-like moments coming soon!

I’m a long-time believer that “as goes Oneonta, so goes the entire area!” So, if nearby communities and school systems around the Oneonta Urban Center are to gain some economic strength, growing the overall economy of the Greater Oneonta urban center is most compelling.

For that to happen, the city and town need to consolidate into one new streamlined higher-powered municipality, one able to substantially expand its public resources, reduce property taxes, raise development confidence among private developers, become a more forceful engine towards hosting far more good paying jobs, growing the municipal tax base and many more positives. There really are no negatives.

And I’m not alone in this belief; please see below the survey results of area leaders conducted sometime back by the Greater Oneonta Economic Development Council In around 2014, GO-EDC put out an area leaders’ survey surrounding its “300 in 3 Challenge”: Can 300 new, good-paying jobs be created over the next three years, through 2018.

The distribution list featured 353 area leaders, garnering 57 respondents who completed the survey. It’s very important to note that the survey indicates that respondents have firm positions about city/town enterprise and job creation.

C. 69 percent of the respondents agreed that the town and city of Oneonta would become more prosperous if they merged. 31 percent disagreed.

While we’re talking consolidation, perhaps merging should also be seriously pursued by other villages and towns throughout the Oneonta area and maybe it’s time to look at forming one or two county school districts?

Colone: ‘Microgrid’ Would Use 90% Renewables

To the Editor:
Dennis Higgins of Otego, once again misstated the content in an early January opinion piece published in this newspaper, which I entitled, “Is a tri-gen municipal microgrid an answer to boosting local energy?”
Mr. Higgins is obviously a pretty smart guy, who must know a lot about energy, but struggles with reading the word “biomass.” He said, I “never mentioned” biomass in my original article. For the record, below is the second paragraph from that original article; bio-mass is mention twice.
“How about establishing a Greater Oneonta Municipal Microgrid System with produced heat and electricity dedicated for use by our industrial sector and perhaps our large energy users, fueled by biomass, solar, wind and backed-up by natural gas. Who could be against it?
“Put the generation plant in a central location within the 270-acre former D&H Rail-yard … This state-of-the-art, 21st-century energy producing concept, one powered primarily with renewable energy sources including bio-mass, hilltop wind, on site ground and rooftop solar would be seen as a model for others to follow!” END_OF_DOCUMENT_TOKEN_TO_BE_REPLACED

By LIBBY CUDMORE • for allotsego.com

ONEONTA – 24 hours after Common Council voted unanimously to pay its $12,500 share of the Local Government Efficiency Grant to study cost-saving measures between the town and the city, the Town Board refused to even bring the resolution, prepared by GO-EDC’s Bill Shue and Al Colone, to a motion for vote.

“We don’t respond to ransoms,” said Town Board member Andrew Stammel.  “These are two activists who don’t live in our town and made a demand. We hear a petition, we have a dialogue, we ask our townspeople and we craft a piece of legislation.”

For almost an hour and a half, town residents debated the proposed study. “Why are we even addressing this?” asked Kate Barns.  “A good portion of us don’t want this study.”

“In 1903, we wanted to merge with the city, but the city wasn’t interested,” said Don Webster.  “What changed? Money.”

“Shared services make me gag,” said Marie Lusins, a member of the Town Planning Board. “We do have shared services. Do we want another $12,500 to tell us this? No.”

END_OF_DOCUMENT_TOKEN_TO_BE_REPLACED

The most steadfast advocate of town-city collaboration is gone, but Mayor Dick Miller’s spirit lives on.

GO-EDC, the economic-development advocacy group spearheaded by Albert Colone and Bill Shue, has invited the Oneonta Town Board and Oneonta City Council to a moderated conversation at 7 p.m. Monday, Dec. 15, on how the two might collaborate for the benefit of both, plus the Greater Oneonta region.

Colone, founding president of the former National Soccer Hall of Fame, said he was inspired, in part, when he ran across the 2008 Center for Government Research study, “Opportunities to Use Shared Services and Consolidation Strategies to Improve Efficiency, Effectiveness and Equity in Local Government.”

The meeting, planned in the Oneonta Middle School auditorium, will be moderated by Steve Smith, executive director of the Mohawk Valley Economic Development District, as well as Shue, who is a former city alderman, and Colone. It will cover three topics:

• The possible development of a comprehensive town-city water/sewer master plan.

• The merits of a town-city tourism, sports and recreation agency to establish Oneonta as the “tourism gateway” to Catskills and Coopertown. 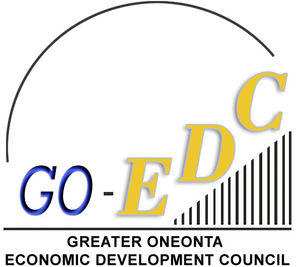 ONEONTA – In advance of Monday evening’s meeting of the Oneonta Town Board and Common Council, GO-EDC has distributed copies of the 2008 study showing the advantages of merging the two municipalities into a single Greater Oneonta.

To Look Into Collaborations

The joint meeting will also review the recommendations in the 2008 Center for Government Research study, “Opportunities to Use Shared Services & Consolidation Strategies to Improve Efficiency, Effectiveness and Equity in Local Government,” which used Greater Oneonta as a model.

Thirdly, the meeting will consider a town-city agreement to form a Sports,Tourism & Recreation Agency to explore related economic-development strategies for the community.