The importance of local news

Hello from Arizona and Jim Kevlin

A few days ago, the first edition of the Tempe Independent – Volume One, Edition One – showed up in the mailbox.

Inside, I learned local Congressman Greg Stanton presented Tempe City Council with a $500,000 check to renovate the Rodeway Inn on Apache Boulevard to accommodate up to 200 of the city’s 380 homeless people.

I learned miles-long Warner Boulevard, a major east-west road through the city, is being repaved, and made handicapped-friendly at the same time.

I learned the historic 1924 Hayden House restoration is complete and will be open for public events and self-guided tours. (Some 100 years ago, Charles Trumbull Hayden’s Saltillo River ferry and his nearby flour mill led to the development of modern Tempe.)

There were also obituaries, sports stories and people news — there’s a new principal at Marco de Niza High School, around the corner — and police blotter items.

My reaction: You bet!

END_OF_DOCUMENT_TOKEN_TO_BE_REPLACED

Opinion by Jim Kevlin: From Cooperstown to Tempe

Opinion by Jim Kevlin
From Cooperstown to Tempe

The heat in the Phoenix area was our greatest fear, and summertime highs of 120+ need to be respected: Drink a lot of water, wear a straw cowboy hat, and stay in the shade.

If you’re retired, perfect. Do what needs to be done in the early hours (8-to-10-ish), stay inside during the day, then emerge again in late afternoon.

(Another benefit of retirement: Stay off the highways during rush hour. Otherwise, it takes us 15-20 minutes to get anywhere we want to go.)

HILL: Reporter Give Thanks To Retired Editor

I need to add my own praise for Jim Kevlin. I moved to Otsego County in July 2018, had never lived in New York State or worked as a breaking news reporter before, and I was 52 years old – not exactly at the most agile stage of life. Yet Jim hired me in Nov. 2018 and I was there for almost a year. It was stressful, but it was also one of the most fun and interesting years of my life.

Jim and Libby Cudmore, then-managing editor, sent me on amazing assignments. I got to report on an American Ninja Warrior from Oneonta, bison who escaped from their ranch, two rescued piglets at the SSPCA, and writer Erica Jong. I got to learn about this area quickly and aspects of it I would probably never have known.

Jim was such a good mentor to me. He always gave me the background to a story that I, as a newbie, needed. He tried mightily to teach me how to take decent photographs since I was a novice at that, too. I often took way too long to write. Given we had looming deadlines, Jim was patient with me although a few times he’d bark, “Hill, why aren’t you finished yet?” in his best editor voice.

All he needed was a cigar although since I now work for Tobacco-Free Communities, I’m glad he didn’t have one.

Mostly, Jim was such a nice man. He treated people who came in to talk to him with dignity. And I enjoyed his sense of humor. I loved that he’d say, “This story could be a hot potato!”

And now that I have overwritten yet another piece for this paper, I will end with congratulating Jim and Sylvia on their retirement and their next fun adventure. Thank you, Jim, for letting me meet and write about people who make this area good and interesting to live in.

COOPERSTOWN – For two months now, the waxing and waning of COVID-19 in Otsego County has been chronicled by Jim Kevlin, editor/publisher of www.AllOTSEGO.com and its sister newspaper, on WAMC’s “Morning Headlines,” hosted by David Guistina.

Here are the reports Kevlin has been delivering at 7:05 a.m. each Thursday, which are broadcast to 250,000 listeners from here through the Capital Region into the Berkshires.  Click the link, then click on “Listen.”

MAY 7 – Only One Active Case In Otsego County

In this week’s “Morning Headlines” on WAMC/Northeast Public Radio, Jim Kevlin, editor/publisher of www.AllOTSEGO.com (and Hometown Oneonta & the Freeman’s Journal), relates how a report that SUNY Oneonta was being threatened by a shooter turned out to be a hoax.

On Thursday’s “Morning Headlines” on WAMC/Northeast Public Radio, Jim Kevlin, editor/ publisher of www.AllOTSEGO.com (and Hometown Oneonta & the Freeman’s Journal), reported how last Monday’s crash of an XNG truck was the first “incident” since one 14 months ago in Schuyler Lake, after which the company shifted its “virtual pipeline” to the wider, better built Route 8 on the other side of Unadilla Creek.

Questions Are Neutral. Answers, Not So Much

Answers, Not So Much

Asking questions: It’s a method of teaching that goes back to earlier than 399 B.C. and Socrates, the seminal thinker who laid the foundation for much subsequent Western thought.

The idea is that a question, in itself, is neutral; at worst – or best? – a provocation to think. It’s the resulting answers to the question that aren’t neutral. The hope is that, tested by argumentation, open debate will lead to the best consensus.

So it’s with some surprise that the www.AllOTSEGO.com Poll, begun in February with the question, “Do you want marijuana stores operating in Otsego County?” has become controversial. There’s a Facebook component for further debate.
END_OF_DOCUMENT_TOKEN_TO_BE_REPLACED

On this week’s “Morning Headlines” on WAMC/Northeast Public Radio, Jim Kevlin, editor/ publisher of www.AllOTSEGO.com (and Hometown Oneonta & the Freeman’s Journal), discusses Sam Nader’s Century, the celebration surrounding his 100th birthday, his careers in politics and baseball, and his many contributions to the city of his birth.

On this week’s “Morning Headlines” on WAMC/Northeast Public Radio, Jim Kevlin, editor/ publisher of www.AllOTSEGO.com (and Hometown Oneonta & the Freeman’s Journal), reports Dreams Park and Cooperstown All-Star Village families are falling in love with Otsego County and buying homes they plan to rent, pay off and move here on their retirements.  The Mellanas of La Habra, Calif, are a case in point.

On this week’s “Morning Headlines” on WAMC/Northeast Public Radio, Jim Kevlin, editor/ publisher of www.AllOTSEGO.com (and Hometown Oneonta & the Freeman’s Journal), reports on how Cooperstown Village Police Chief Mike Covert was down to $17 after the County of Otsego cancelled his medical insurance and the Village Board declined to put him on the village plan.  Only a GoFundMe drive organized by a former colleague of Mike’s in the sheriff’s department, Mike Ten Eyck, help keep the chief from destitution.

Editors with ink in their veins thrill at the news that traditional books are rebounding (10 percent as of mid-2018) and Kindle appears to have peaked, and is now declining (3.8 percent).

Happily, Otsego County’s newspapers – the 211-year-old Freeman’s Journal and Hometown Oneonta, now 10 years old – are stable, profitable and ever-striving to serve the reading public, and will continue to do so for the foreseeable future.

But www.AllOTSEGO.com is growing in leaps and bounds.

So as of 5 p.m. today, we relaunched www.AllOTSEGO.com as:  Otsego County’s Daily Newspaper/ONLINE, with the goal of giving readers everything you expect in a local newspaper, up to the minute and at your fingertips.

END_OF_DOCUMENT_TOKEN_TO_BE_REPLACED

In this week’s “Morning Headlines” on WAMC/Northeast Public Radio, Jim Kevlin, editor/publisher of www.AllOTSEGO.com (and Hometown Oneonta & the Freeman’s Journal), reports how the development of the 1988 “Women in Baseball” exhibit at the National Baseball Hall of Fame in Cooperstown led Penny Marshall, who died Monday, to create the hit movie, “A League of Their Own.”

At Taste Of Foothills 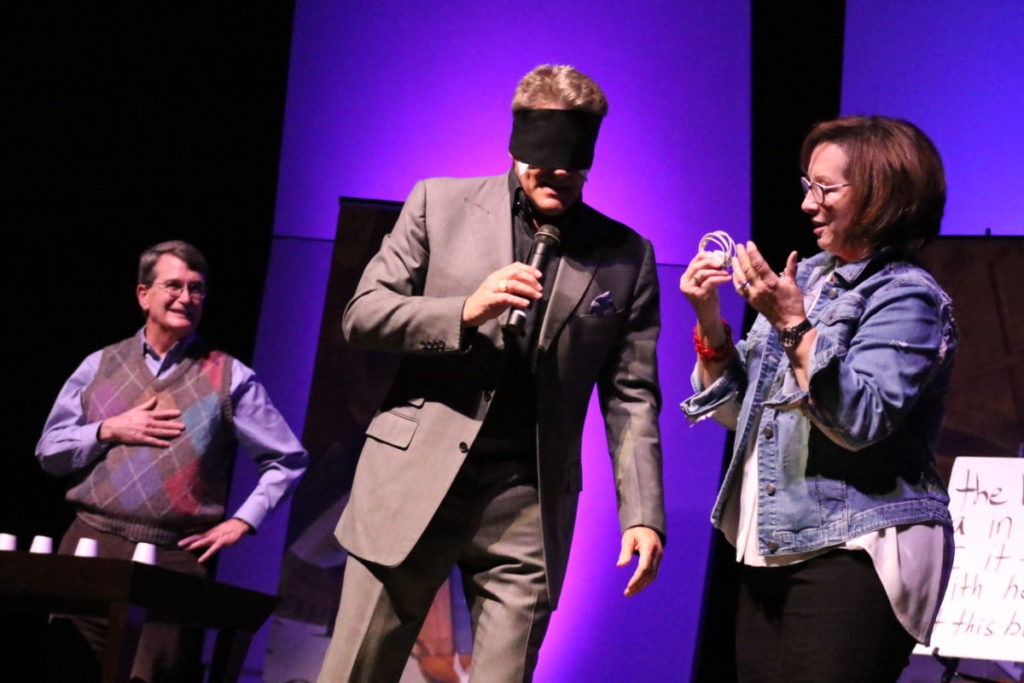 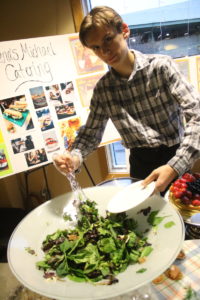 No peeking! Above, Mentalist Craig Karges, with coins taped to his eyes with a blindfold on top, was able to correctly guess that Cindy Seward, right, Milford, was holding a cell phone charger without seeing or touching it. They were joined on stage by Jim Kevlin, left, Cooperstown, who arranges cups to hide a dangerous spike for a second trick. Earlier in the evening, diners enjoyed the finest food selections from area eateries. At right, Ivan Miritello, Oneonta, serves up some salad from Elena’s Michael Catering, one of the many food selections from area eateries during this evening’s  Taste Of Foothills banquet. (Ian Austin/AllOTSEGO.com)