Trailblazer Awards to be given at Oneonta City Hall

Trailblazer Awards to be given at Oneonta City Hall

The Trailblazer Awards will be handed out at 6:30 p.m. on Wednesday, July 14, at Oneonta City Hall.

Originally, they were supposed to be given out at Damaschke Field but this was changed due to the potential of bad weather.

Mayor Gary Herzig will be presenting the awards.

“All are encouraged to join us in recognizing four women whose selfless work has made the Oneonta community an even better place to live,” Herzig said in a press release.

Weather permitting, the winners of the award might still be honored at Damaschke field the same day.

The annual awards, given in honor of Women’s History Month (March), the Woman Trailblazer Award recognizes a woman in the Oneonta area who has enhanced the visibility and importance of women through her employment, volunteering and community engagement.

END_OF_DOCUMENT_TOKEN_TO_BE_REPLACED 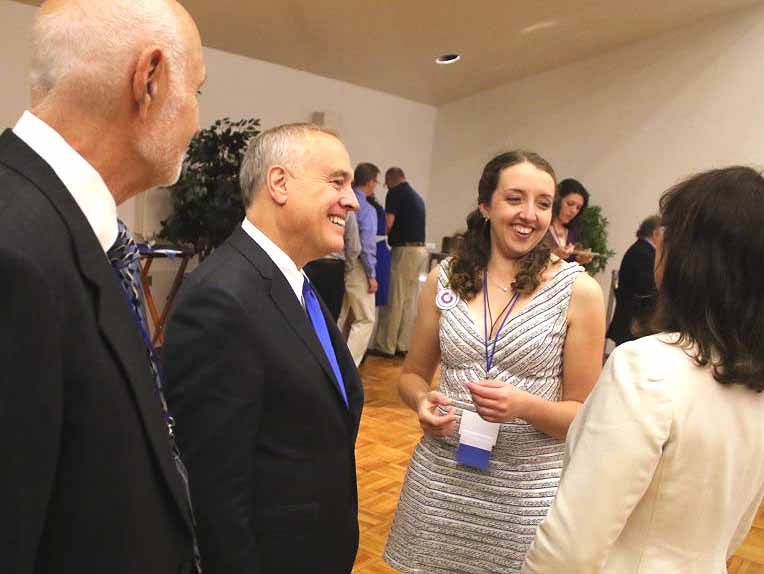 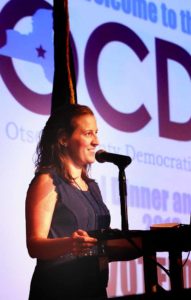 State Comptroller Tom DiNapoli, who keynoted last evening’s county Democratic annual dinner, urged the party faithful to focus “laser-focused” on the presidential election in November 2020.  “My fear it that we will make the mistake again of looking for perfection,” he said, “and in the end it will hurt us … Reach outside your comfort zone of your support base and don’t just talk to people who agree with you.”   Above, DiNapoli chats with, from left, Oneonta Mayor Gary Herzig; Caitlin Ogden, who is running for county board in the Otego-Laurens district, and former Oneonta Mayor Kim Muller during the social hour at SUNY Oneonta’s Hunt Union Ballroom.  “Our county us poor: 25 percent of children in Otsego County live below the poverty line,” Herzig said in his welcome. “…We must remain focused on the concerns of the people we serve, because too many times those who elect us cannot meet their own basic needs.”  County Democratic Chairman Aimee Swan, inset, said local Democrats are on the march: “We are energized. Many of our meetings are standing room only. We are seeing record-breaking attendance.  Local Democrat turnout has doubled since we turned Faso out.”  Congressman John Faso lost the 19th District seat to Democrat Antonio Delgado last November.  (Ian Austin/AllOTSEGO.com)

ONEONTA – Common Council will be asked to approve a $155,000 contract for planning a transit hub around the Downtown Parking Deck when it meets at 7 p.m. Tuesday at City Hall.

Paid for with state money available through the DRI (Downtown Revitalization Initiative), the contract will be with Wendel, a consulting firm in Williamsville, the Buffalo suburb, for a Transit Hub Conceptual Planning Study.

END_OF_DOCUMENT_TOKEN_TO_BE_REPLACED

SO FAR, NO CASES HEARD

ONEONTA – A year and a month since it was revived and with no cases heard yet, the Otsego County Board of Ethics has suffered another setback.

Its chairman, Kim Muller, the former Oneonta mayor who recently stepped down at Otsego County Democratic chair, has advised county board Chair David Bliss, R-Cooperstown/Town of Middlefield, that she will depart when her term expired at the end of this month.

“My professional obligations are likely to become an impediment for scheduling Committee meetings moving forward,” she said in an e-mail to Bliss.

END_OF_DOCUMENT_TOKEN_TO_BE_REPLACED

ONEONTA – Otsego County is close to gaining an ethics board.

Otsego County Ethics Board members Kim Muller, Michelle Canton and Brett Holleran met Monday at 5 p.m. to hammer out some details. The board is tasked with investigating and ruling on violations committed by any Otsego County employee as well as any elected or appointed official working for Otsego County

“Before we can accept any complaint of an ethics violation, we need to decide how we will deal with the complaint,” Muller said. “Today, we are working on the standard operating procedures.”

END_OF_DOCUMENT_TOKEN_TO_BE_REPLACED

Marching On The Mall

After 4-Year Run In Downtown

ONEONTA – The Red Caboose on Muller Plaza is planning a farewell party at 6 this evening, after announcing on its Facebook page earlier this week that it is closing after a four-year run.

The proprietor is Tim Masterjohn, son-in-law of former mayor Kim Muller, who previously had been in the restaurant business in Washington D.C.