Football Coach Joe Kennedy: A prayer sidelined me – here's why I'm still fighting to get back in the game

Marie Osmond reflects on remarrying her first husband: ‘God brought a miracle into both of our lives’

Biden needs a quick win on Covid, with or without Republicans

SUNY Student Senate To Study How To Vet OH-Fest Headliners

To Study How To Vet

ONEONTA – By a 9-5 vote, with one abstention, the SUNY Oneonta Student Associate Senate voted Tuesday, April 23, to do nothing for now on vetting of future OH-Fest headliners.

Instead, it plans to set up a study committee to make recommendations.

Drafted by junior Eric Battista after this year’s OH-Fest concert was suddenly cancelled over gang-rape allegations against Rapper Sean Kingston, the resolution sought to toughen background checks in the future.

“Whereas students of SUNY Oneonta were left in the dark on communications that invited people to the college that conflicted with our values and mission statement,” wrote Battista.

He drafted the resolution after SUNY Oneonta cancelled canceled the concert for the first time in OH-Fest’s 13-year history, the day after a “community dialogue” organized by a Know Violence Committee indicated protest might punctuate the music.

“We did the search on Sean Kingston. Nothing came up on his background search because he was not convicted,” said Senator Arianna Greene. Instead, she suggested creating an “open forum” for students to share information, especially on social media, instead of creating a committee.

END_OF_DOCUMENT_TOKEN_TO_BE_REPLACED

By JENNIFER HILL Special to www.AllOTSEGO.com

ONEONTA – While most SUNY Oneonta students were at OH-Fest festivities today, eight students, a faculty member and a staff member met gathered at 5 p.m. to discuss ways to avoid selecting musical performers that did not match “the values of SUNY Oneonta.”

SUNY junior Eric Battista scheduled the meeting after he emailed students early about a resolution he drafted, proposing to “change the way speakers/performers are chosen and handled in the future” by the college’s Student Association.  He said he received “hundreds of emails” back from students who said they supported his proposal but already had plans at the time of the meeting.

Battista decided to write the resolution and introduce it after SUNY Oneonta administrators Friday canceled tonight’s OH-Fest concert.  Their decision came after learning students intended to protest the concert’s top performer, Sean Kingston, after discovering 2010 gang-rape allegations made against the rapper.

END_OF_DOCUMENT_TOKEN_TO_BE_REPLACED 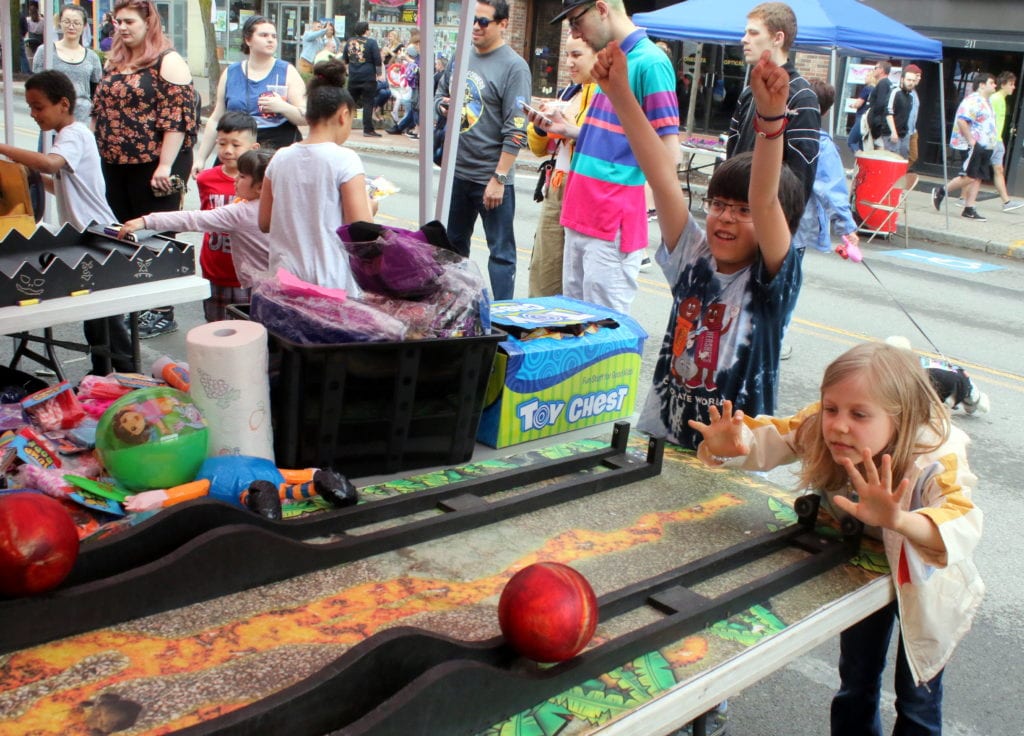 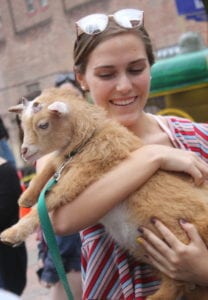 Tonight’s Rapper Sean Kingston concert in Neahwa Park was cancelled over gang-rape allegations from nine years ago, but despite warnings of rain, the 13th annual OH-Fest Street Carnival went off without a hitch today as Main Street was filled with throngs of locals and students alike gathered to enjoy music, food and festivities. Above, Oneonta’s Yussef Romeo and Fay Pikul, played one of the carnival games, while Paige Stewart, right, hugs Tiny Tim, a pygmy goat from New York Goat Yoga in Gilbertsville. OH-Fest is an annual joint celebration of spring by Hartwick College and SUNY Oneonta students.  (Ian Austin/AllOTSEGO.com)

END_OF_DOCUMENT_TOKEN_TO_BE_REPLACED

Too Little Time To Reschedule

It On Campus, College Declares

ONEONTA – SUNY Oneonta this afternoon cancelled tomorrow’s OH-Fest concert after students learned the featured artist, rapper Sean Kingston, had faced allegations of involvement in a gang rape in 2010, and they gathered last evening in a “community dialogue,” trying to decide what to do.

Mayor Gary Herzig, concerned about protests, this morning withdrew the city permit for OH-Fest to stage the concert in Neahwa Park, suggesting it be moved to SUNY Oneonta’s Dewar Arena.

A few minutes ago, however, SUNY Oneonta VP/Student Development Franklin Chambers announced there’s not enough time to stage such a large event in such short order.  “Our decision came down to safety,” he said.

END_OF_DOCUMENT_TOKEN_TO_BE_REPLACED

If Protest Breaks Out, OPD Lacks

Resources To Control It, He Says

ONEONTA – City Hall revoked OH-Fest’s Neahwa Park permit this morning after Mayor Gary Herzig learned on www.AllOTSEGO.com overnight that large numbers of students might protest concert headliner Sean Kingston after learning last week he and his bodyguard were accused of a gang rape in 2010.

The city’s decision throws into doubt whether the Saturday night OH-fest concert will happen at all.

END_OF_DOCUMENT_TOKEN_TO_BE_REPLACED

Ought Sean Kingston Be Disinvited?

ONEONTA – After learning last week that the OH-Fest headliner, rapper Sean Kingston, and his bodyguard were accused of gang rape in 2010, SUNY Oneonta students and staff – some said they were sexual assault survivors – met this evening in the college’s Center for Multicultural Experiences to discuss whether to push for canceling Kingston’s performance.

Leaders of the college’s Know Violence Committee – its stated goal it to educate the campus on “issues of sexual assault and relationship violence” – organized the “Open Community Dialogue” meeting after word of the allegations against Kingston spread.

About 60 people attended, many of them voicing opposition to allowing Kingston to perform and anger at “the lack of response” from SUNY Oneonta administrators, who have not yet issued a statement about the controversy.

END_OF_DOCUMENT_TOKEN_TO_BE_REPLACED

ONEONTA – In the ongoing debate over the behavior of college students in Oneonta, specifically pertaining to OH-Fest, the annual joint college festival, Common Council members still cannot come to an agreement as to what needs to happen, or how to solve the issue of binge drinking in residential areas in the city.

Concerned citizens petitioned once again, pleading for council members to work together to solve the issue sooner rather than later.

“I’ve noticed that we have a huge problem with drinking and drugs. There is actually a store on Main St. that has t-shirts and sweatshirts that have ‘Stoneonta’ printed on them,” said Oneonta High School Sophomore Abigail Dening.

END_OF_DOCUMENT_TOKEN_TO_BE_REPLACED

But Holds Firm On OH-Fest

Talking led to shouting between the two until Mayor Gary Herzig stepped in to bring order to the discussion. Two weeks later, Rissberger apologized at last night’s Council meeting for his conduct, yet reaffirmed his belief that OH-Fest should be held off city property.  It is currently held in Neahwa Park.

END_OF_DOCUMENT_TOKEN_TO_BE_REPLACED

ONEONTA – With over 1.2 million subscribers on YouTube and 8.8 Million monthly listeners on Spotify, A Boogie Wit Da Hoodie – his top hit is “Drowning” – is set to be named as the headline act at Oneonta’s OH Fest XIII this year.

END_OF_DOCUMENT_TOKEN_TO_BE_REPLACED

‘No Major’ Trouble Reported At OH-Fest

Brenner Puts Event ‘On Successful Side’

ONEONTA – With almost 4,000 people at the Kid Ink concert that closed out OH-Fest, police reported “no major arrests” and only a handful of misdemeanor tickets issued.

“We can chalk this one up to the successful side,” said Lt. Douglas Brenner.

Three high school students were arrested for public fighting after the concert let out at 9:30 p.m., he said, and released to the custody of their parents.  In addition, five criminal mischief tickets were issued, two noise complaints, a simple possession charge of marijuana and one for public urination.

In addition to patrols the city, several police officers were station at Neahwa Park to assist EMS and security if there was a problem with the crowd.  Two patrons were taken to the hospital for alcohol poisoning, and another was escorted out of the concert by EMS personnel after she injured her ankle.

END_OF_DOCUMENT_TOKEN_TO_BE_REPLACED

Panic! At the Disco

OH-Fest Headliner:  Panic! At The Disco

ONEONTA – “I Write Sins, Not Tragedies” singers Panic! At the Disco are the headliners for the 10th annual OH-Fest, to be held April 25.

No decision has been made on whether to hold the concert in Neahwa Park or at the Alumni Field House, per review of the application by Common Council.